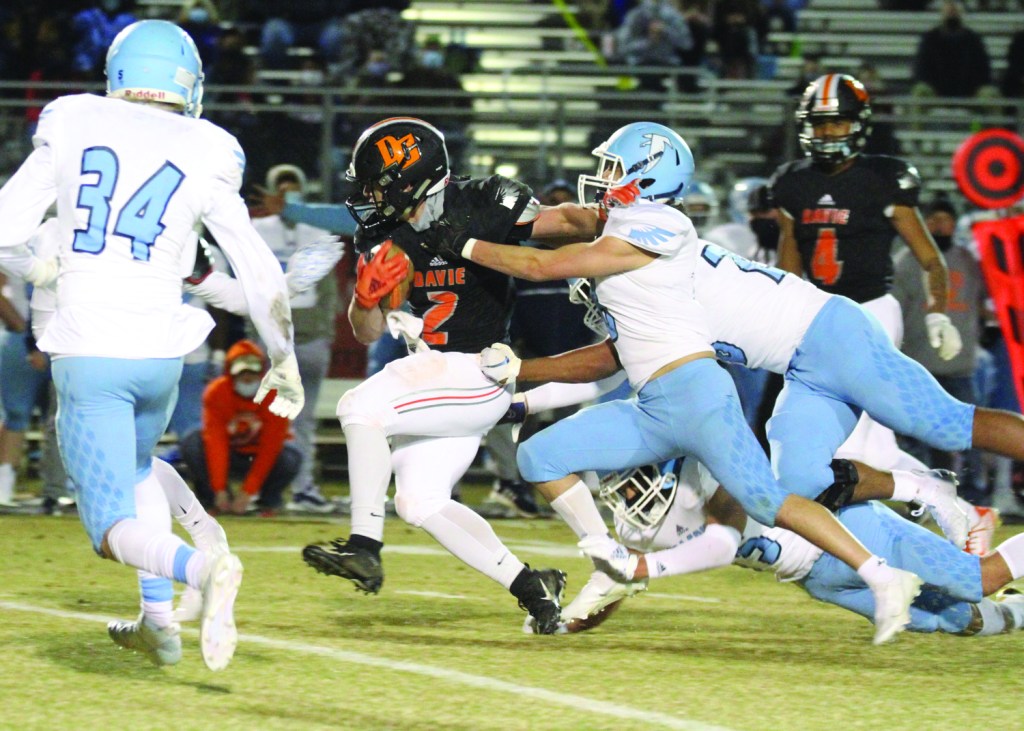 There’s no way you could have predicted this kind of performance from quarterback Alex Summers last Friday in Davie’s home opener against West Rowan.

He did not attempt a varsity pass in 2019 while serving as Nate Hampton’s backup and playing JV. In the first half of the opener at Ragsdale, Summers was 2 of 3 for 6 yards. He did overcome the nerves in the second half, throwing for 109 yards and two touchdowns.

Against Ragsdale, Summers finished 7 of 13 for 115 yards. Against West, he had seven completions by his eighth attempt. He finished 22 of 30 for 209 yards and two more TDs.

“He’s developing confidence in himself,” coach Tim Devericks said. “He’s settling in and doing the reads. He was making reads at the right time, and the receivers did a good job blocking downfield. It was good stuff.”

West’s defense did a good job of keeping running back Tate Carney from exploding. After averaging 152 yards in his last five games, he carried 19 times for 64 yards, with no run longer than 14. But he still did Carney things, like producing 102 rushing/receiving yards and scoring four TDs (three rushing, one receiving). While the Falcons had to be thrilled at limiting Carney to 3.3 yards per carry, they had no answers for Summers and the screens, hitches and all the underneath routes, especially from Jack Reynolds (nine catches for 76 yards) and Zymere Hudson (5-79).

“They want to chip in and do their part,” Devericks said of the passing game. “West tried to eliminate (Carney) from the game. (Summers) was patient, our guys were patient and we were able to execute. They’ve got to stay patient.”

The Falcons had a chance to take an early lead. Aided by a roughing-the-punter penalty, they converted two third downs, picked up four first downs and kept the ball for 15 plays. But sophomore cornerback Willie Purvis foiled their plans on fourth-and-10 from the Davie 23. QB Noah Loeblein went deep and Purvis intercepted in the end zone.

“We knew we were going to be tested on the outside,” said safety Caleb Bowling, who made his own pick later in the half. “We played a lot of man and knew (Purvis) had to stay strong. And it was one heck of an interception.”

Davie’s offense failed to score on its first two possessions – Willy Moure was short on a 36-yard field goal and one of Davie’s seven first-half penalties undermined the second series – but a ridiculous interception by Bowling proved to be a turning point. Loeblein tried a corner-route pass on third-and-10, and the Drake-bound senior made a diving, fingertip INT at the West 45.

“I thought it was a throwaway, and Caleb redirects from off the hash, comes over and makes a tremendous interception,” Devericks said.

“I never would have thought he would have made that play,” defensive line coach Randy Athey said.

“I couldn’t believe he made that play,” defensive coordinator Blaine Nicholson said. “That took them away from trying to throw at him. It was unreal. I lost my mind on the sideline. There’s a reason why he’s going to play at the next level.”

“Shout out to the coaches for putting us in that position,” Bowling said. “We’d been practicing man all week. We knew the bench route was coming.”

On the ensuing possession, Carney ran 14 yards before moving the sticks on third-and-1. Then Summers hit Hudson over the middle for a 17-yard score as Davie took a 7-0 lead with 8:15 left in the second quarter.

The momentum quickly began to snowball for the War Eagles. On the next play from scrimmage, interior pressure forced a fumble that Justin Hayes recovered at the West 14. Carney was in the end zone four plays later, taking a direct snap from the wildcat formation with Bowling by his side and scoring from the 2.

Later in the half, Davie was on the move, but Carney’s substantial run was called back as he was flagged 15 yards for hurdling a defender and a bad snap cost Davie nine more yards.

But when the half ended with Davie ahead 14-0, Summers had a remarkable statistic: 12 of 13 for 141 yards. He spread the wealth  to Reynolds, Hudson, Za’Haree Maddox and Carney. There’s a chance we’re going to look back at this half as an important part of the season story. For if Davie’s passing game can consistently click to complement Carney, it can contend in the Central Piedmont Conference.

“Alex is a hard worker,” Bowling said. “He knew he had some big shoes to fill replacing our boy Nate, and he’s done a heck of a job doing that. He’s spreading the rock out to everybody and putting points on the scoreboard.”

“Coach Gould laid out a great game plan for us,” Hudson said.

“I felt confident throwing it to everybody,” Summers said. “Gould said before the game that we’ve got to pick up the tempo. They weren’t set during the play, so he said make the easy passes and keep the tempo up.”

If the first half hadn’t proved that Summers was in a zone, the fifth play of the second half hammered home the point. It was third-and-17 from the Davie 29. Summers calmly zipped a pass over the middle and Hudson reached back and made a big-time catch for – you guessed it – 18 yards.  Davie did not face another third down during a 10-play, 75-yard TD march that was culminated by two wildcat snaps to Carney.

Davie could smell blood at this point. Linebacker Gage Recktenwald recovered a fumble at the West 19, and Carney went up the middle for a 9-yard TD, bowling over a defender at the goal line. At 28-0, Davie was headed to 2-0 with its second 28-point victory.

“They were running the two high, so the middle was going to be open,” Summers said of the third-and-17 hookup with Hudson. “I was looking for the X (Chase Robertson). If that wasn’t there, I was going to look for Zymere and he was open.”

“Alex is my boy,” Hudson said. “I’ve got the upmost confidence in him. He’s going to do what he’s got to do.”

The relentless defense gave the offense another short field when linebacker Trevor Richardson blocked a punt. On first down from the West 13, Davie twisted the knife in, Summers flipping a pass outside to Carney, who rolled in for his second straight four-TD effort. It was 35-0 with 5:48 to go.

“I feel good for the guys,” Devericks said. “We found a different way to win. The defense gave us some short fields and we capitalized. Feeding off each other was a big part of it.”

The defense is playing at an entirely different level than the 2018-19 units. There is an electricity about this secondary (cornerbacks Purvis and Justus Tatum and safeties Bowling, Kristian Lyons and Beaven Arey). They made life miserable for Loeblein, who went 4 of 21 for 50 yards.

“It’s a benefit to have returning starters in a season like this,” Devericks said.

“We’ve got guys (in the secondary) who can play,” Nicholson said. “They’re really smart. It’s easy for them to make plays because they put in the work on film. Between Caleb, Kristian and Beaven, it’s tough to say there’s been a better safety combo than those three since I’ve been here. They’re all big hitters. They all can cover in man. And they’re all pretty smart, too.”

Purvis tweaked his hamstring with 1:24 left in the third and walked off slowly. Junior Peyton Helton filled in beautifully, breaking up two passes in a span of three plays.

“He made a great play coming off the hash on a flood route,” Devericks said. “He covered a lot of ground.”

“We had to move Kristian from free safety to corner,” Nicholson said. “We put Peyton at free, and sure enough, they tried to attack our subs. Peyton stepped up in his moment. That builds confidence for him, in his teammates and for us to put him in there. That’s really good to see.”

The pressure was so relentless that 11 guys made at least four tackles, including Taylor (seven), Shermer (five), Richardson (five), Fuller (five), Davis (four), Rose (four), Recktenwald (four) and Bumgarner (four). Getting two tackles for loss each were Taylor, Shermer, Richardson and Fuller. Holleman caused a fumble. Richardson and Taylor were credited with three hurries, while Fuller had two. Fuller, Shermer and Taylor had sacks.

The War Eagles seemed destined for their first shutout in four seasons, but Akim Robinson broke a 64-yard TD run with 5:16 remaining. Aside from that, West only managed 2.9 yards per carry on 46 rushing attempts. It resulted in Davie’s finest defensive effort in 33 games (43-7 over Carson in 2017).

“This has been a long time coming,” Bowling said. “In the offseason, we would get groups to go to the Twins field in Advance and we would work. It’s good to see this pay off the first two games.”

• Davie stopped a two-game slide in the West series after losing 38-31 in 2018 and 24-21 in 2019. … Robinson scored the first points in eight quarters for West (0-2). … Thanks to Governor Cooper’s relaxed restrictions concerning COVID-19, stadiums are allowed to sell tickets for 30-percent capacity. Thus Davie hosted 900 fans.

• Davie was missing left guard Zymier Lewis, who was on crutches. Merritt Killian took over there. The rest of the line was the same as the week before: Camden Beck at left tackle, Ashton Williams at center, Ethan Doub at right guard and Spencer Williams at right tackle.

• Summers threw a fourth-quarter INT, his first turnover in 37 pass attempts. … Sophomore Brodie Smith showed again he’s capable of spelling Carney at RB if need be. He gained 36 yards on six carries in Davie’s final series – when the defense knew what was coming every time – and he’s averaging 4.6 yards per carry across two games. … Moure was 5 for 5 on extra points, making him 11 for 11 on the season. … The game was marred by penalties – 12 against West and 11 against Davie. … Reynolds made nine catches in a game for the third time in his career.

• Of Arey’s five punts, four of them pinned West inside the 20. “His punting is at an all-conference level, and he’s the first one running down on kickoffs,” Nicholson said.