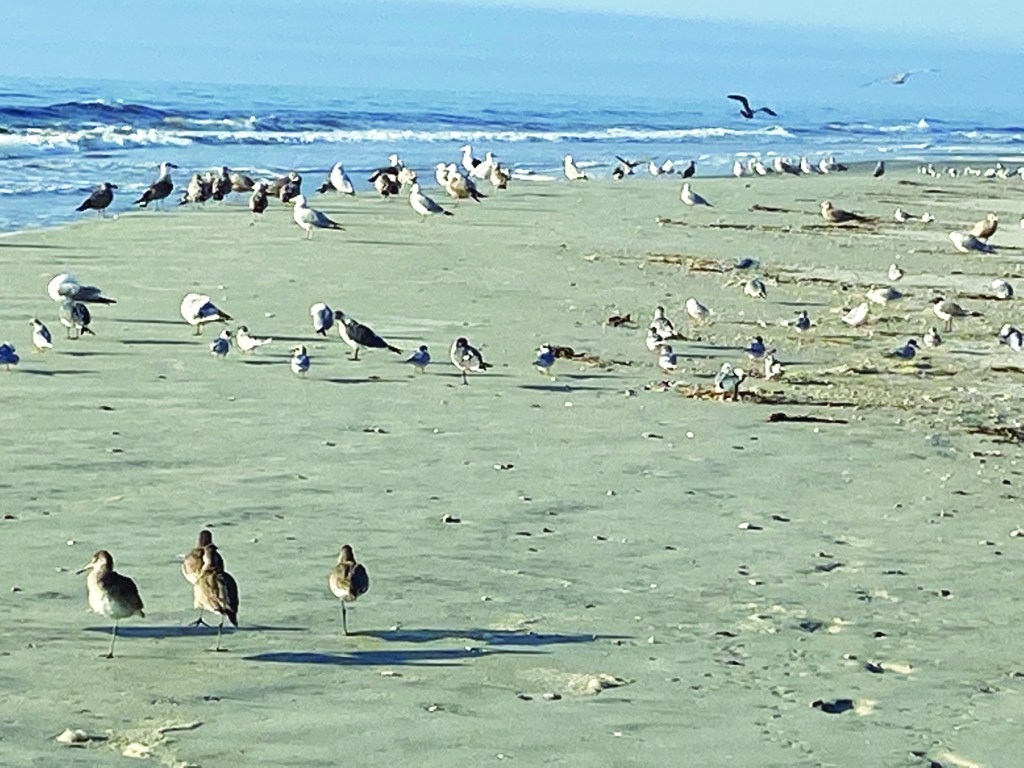 Birds of a feather really do flock together.

Seasons of Our Lives

Several decades ago, I struggled with math. I could handle the basic stuff, but anything more complex confounded me. I remembered being in tears after several Friday math tests. It did not help that a person in front or behind you may be grading your paper after each test. On the one hand, being poor at math discouraged me but having my classmates know it crushed me.

The situation did not improve much as I ascended grade levels. I struggled with the advanced arithmetic classes scraping by with low grades consistently. Math was a bear. For me, this was a mighty low season of self-doubt, shame, and frustration. To say my heart wasn’t into the study of mathematics was accurate. Others passed over the math hurdle easily, yet I couldn’t seem to find a way over the barrier. However, what I did not understand was that a new season was coming.

Several years after high school, I decided to take a college course involving plenty of mathematics. At this point, you are probably thinking I’m setting myself up for a disaster, and you would be correct, except something had changed. A new season had arrived. I was confident and no longer confounded. A few months before starting, I purchased three algebra books that displayed formulas in steps explaining the why for each equation. Nightly over dinner, I studied and worked each formula out until I was satisfied I understood it and could handle future math classes reliably. As it turned out, I did. I would go on to take classes in machinist mathematics, trigonometry, and diagram measurements. I enjoyed it all, and the barrier, now, seemed so small I could step over it.

So, why have I told you this? Was it to toot my horn or say look at me? No. Actually, I’m embarrassed by this part of my life. Until these recent years of seeing things in a new light, I would have never shared this story. I’m thankful I can look back on a few of these shortcomings and feel satisfaction instead of regret. Often, I struggled with various efforts and despaired that I wasn’t any better. What I didn’t understand was that things do change.

There are many times in our lives when we are not prepared to do something well, and we may struggle even when we try our best. Life can test us many times with experiences we are not ready to handle. You may feel that everybody is moving on ahead of you as you struggle to keep up. Those situations are going to hurt, and you are going to feel despair. If you take anything away from this writing, I hope it is this. Seasons change. Whatever you may be going through right now, it may be awful. Maybe doubt has clouded your mind, so you can’t find confidence anymore. Perhaps you feel that shame, tears, and frustration are your constant companions. I want you to remember that while today may seem bleak and hard to bear, not too long from now, a new season will dawn. One day, years from now, you are going to rejoice at what a difference a new season has made.

Early Settlements in the Piedmont Area

As areas up north began to get crowded, many people came south. Although traveling down the Great Wagon Road was long and arduous, these early folks of the mid 1700s traveled it willingly in order to find cheap and beautiful land for their new homes. The first settlers of the Yadkin Valley area had their choice of land to pick from and usually chose property based on fertile soil for growing crops and access to water, such as rivers and streams. In addition, settlers often traveled in groups with people they already knew, sometimes those of the same nationality or religious affiliation. Among the earliest settlements in our area of the Yadkin River Valley are those discussed below.

The Jersey Settlement in what is now mostly Davidson County came about because of problems with acquiring and keeping royal land grants in the area of Hopewell, N.J. in the mid 1700s. Several people then abandoned their homes and hired Morgan Bryan to find new land for them. Bryan was also their guide on their journey around 1745. Several families stopped and made their homes in the area of Swearing Creek. Names such as Smith, Hunt, Merrill, Titus, and Heaton were among the earliest group. One of the first things they did was to organize a church for all denominations until ministers became more abundant and divided congregations into separate groups. Present day Jersey Baptist Church owes its origin and its name to this early group. I discovered that my early ancestors, Richard and Abigail Hartley, lived in that area by their deed of property and that they joined Jersey Baptist Church in the late 1700s.

Another group that came to the area that is now Yadkin, Davie, and Forsyth counties, made their homes on both sides of the “shallow ford” crossing of the Yadkin River. The leader of this group was the family patriarch, Morgan Bryan, who was in his late 70s when he brought his family here although he had guided many other groups to this area. They first lived west of the Yadkin near what is now Lewisville but later moved to the area now known as Farmington, where he owned several thousand acres of property. The Bryans and the Boones were closely connected, with Daniel Boone marrying Bryan’s granddaughter, Rebecca. Several other Bryan-Boone marriages happened here. Some of the Bryans went with Daniel Boone as he blazed the trail to Kentucky. As I was working on a family member’s genealogy, I discovered that both Bryan and his wife’s graves were discovered in the area that is now Oak Valley and that a monument now stands in there to mark this spot.

Although there were several other groups who came here, perhaps the best known are the Moravians. Bishop Spangenberg, the leader of that group, purchased 98,000 acres of land from Lord Granville and called it Wachovia after a place name in Germany. Starting with a group of unmarried men who were proficient in various trades, the area grew as other people arrived in 1753, and Bethabara and Bethania began to get crowded. The construction of Salem in 1766 led to its becoming the center of Wachovia and the home of the Moravian’s main church. The Moravians kept great records, and their archives are abundant sources for what happened daily in their lives. They have kept the flame, as it were, of their origins and religion more than most of our early ancestors.

Getting Away With Murder

While reading some books on North Carolina history, I came across the following story.

On July 11, 1892 on the Cherokee County boundary line, William Hall murdered Andrew Bryson. William Hall stood on the North Carolina side of the boundary line and shot and killed Bryson who was standing on Tennessee side of the border. Hall was convicted of murder in the 1893 spring term of the Superior Court of Cherokee County. However, the Supreme Court of North Carolina granted a new trial at the February term of 1894 on the grounds that Hall could not be held guilty of homicide (in Cherokee County) for a crime that occurred in Tennessee. This decision led to efforts of the State of Tennessee to extradite the defendant. However, the Supreme Court of North Carolina held on habeas corpus proceedings that no one can be alleged to have fled from the justice of a State (i.e. Tennessee) in whose domain he was never been corporeally present since the commission of the crime. Hall was released and was never tried again.  North Carolina passed legislation in 1895 making similar homicides a crime in North Carolina as well as in Tennessee.

Birds of a Feather

When I was a teen, my mother often shared this quote with me.

“Birds of a feather flock together.”

The adage related to an individual’s character and was meant to discourage me from choosing the wrong friends.

Recently, on a trip to the northernmost end of Myrtle Beach, I walked past a nature preserve and eventually came to a swash – where natural stream meets beach and ocean. As I observed birds gathering there, I noticed at least five types of birds. Each flock gathered together in groups – separate from other bird types.

I reflected on how this sight – the flocking of each distinct, feathered bird – must have inspired the well-known quote.

As I have matured to adulthood, I have come to realize many of my mother’s quotes and sage advice were spot on.

The Bible has much to say about how we flock with one another. If we consider our associations, we connect through friendships, with loved ones and significant others, or in unity as husband and wife.

I thought I’d take a look at how the words of God guide us in gathering or flocking with one another.  Currently, I’m reading a book written by a minister, Greg Laurie, who makes several strong points about Christian relationships based on Biblical scripture.

To begin with, the Bible tells us that it’s super important to develop friendships with folks who have certain qualities. It’s crucial that we take time to consider our friendships and associations, asking ourselves, “What qualities should our associations embody?”

Flocking with those who pray regularly, serve God and their church, or engage in Bible studies – these are the people who will build you up spiritually. Therefore, spend the majority of your time with these folks.

“The righteous man is cautious in friendship, but the way of the wicked leads them astray.” (NIV, Proverbs 12:26).

We understand that hanging out with nonbelievers provides an opportunity to positively influence someone’s life,  possibly leading them to Christ. However, there’s no doubt people can drag you down spiritually if you spend lots of time with them. We have to be careful here and mindful of time spent flocking with nonbelievers.

Jesus invested time in sinners. He didn’t turn away from sinners, but on the other hand, he wasn’t drawn to their actions, either. So while continuing to introduce and win people to Jesus, spend the majority of your time with Godly people. Stay grounded in the truths of your Bible, so your personal walk doesn’t suffer.

Like friendships, Laurie suggests a Christian dating relationship would look something like this – spending time in prayer with one another, studying God’s word, participating in ministries, Bible studies, or other Christian activities – together. Work on building in one another the things that endure for eternity. Our choices determine both good and bad outcomes. When deciding whether to date someone or not – choose someone with similar spiritual beliefs and one who’s active in their spiritual life.

Also, in marriage, the words of God are clear. A Christian has nothing in common with an unbeliever. The Bible addresses spiritual inequality in marriage – the yoking of a believer and nonbeliever, and reads,

“Do not be yoked together with unbelievers. For what do righteousness and wickedness have in common? Or what fellowship can light have with darkness?” (NIV, 2 Corinthians 6:14).

The choice is yours. Flock with intention, not chance – with folks of the same feather.