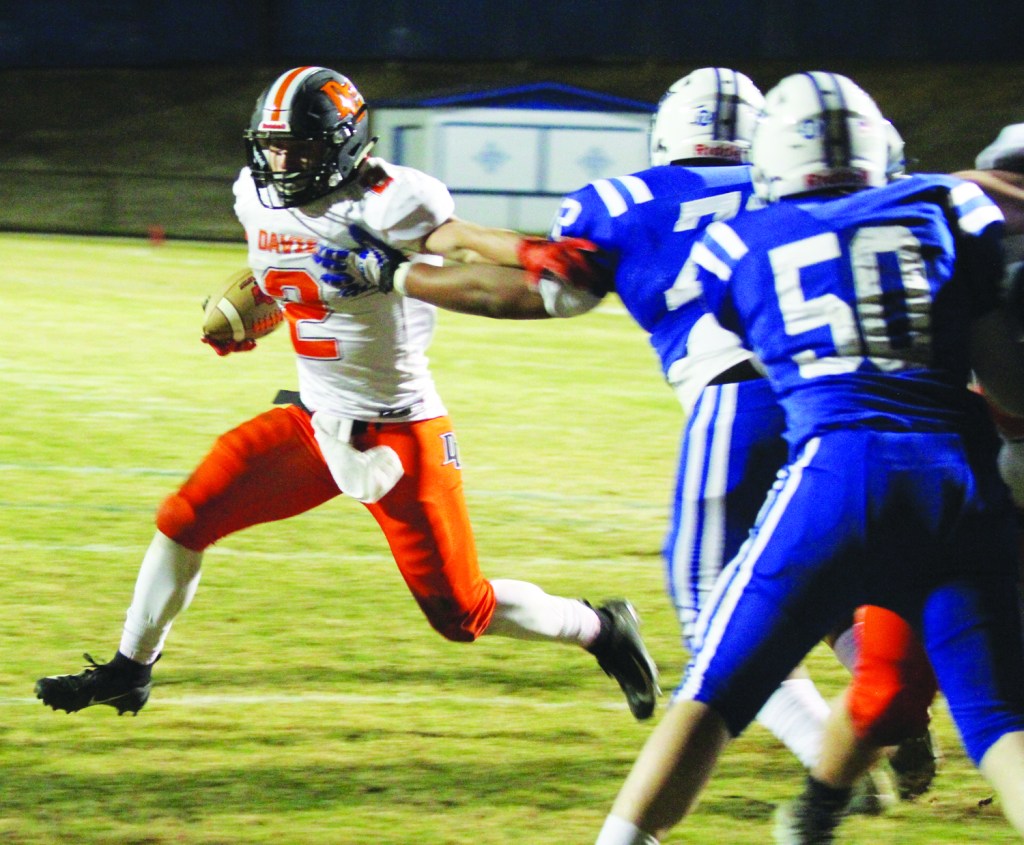 After waiting 15 months and 462 days, Davie football season finally arrived Thursday at 7 p.m. By 7:02, Tate Carney was off to the races.

The growing legend of Carney added another page on the first play from scrimmage in a nonconference game at Ragsdale. The junior running back blazed 73 yards for a touchdown that sparked a crushing victory, 42-14.

Carney averaged 10.2 yards per carry and scored four TDs, Kristian Lyons and the special teams made plays, and Caleb Bowling, Avery Taylor and the experienced defense came through with flying colors as the War Eagles pounded out their largest opening win in 12 seasons (41-7 over Watauga in 2008).

The passing game is a work in progress as junior Alex Summers grows into the quarterback job, but Carney is a horse you can ride until everything comes together offensively.

The long layoff between seasons due to COVID-19 made Carney’s blood boil, and he blasted out of the gate like a cannonball. Willie Purvis’ kickoff return set Davie up at its 27. On first down, Carney found congestion up the middle and bounced left. He broke a tackle at the Davie 42, broke a tackle at the Ragsdale 35 and kept trucking. Kicker Willy Moure, who went 6 for 6 on point-after tries, made it 7-0.

“I was just excited to have the chance to be out there,” Carney said. “That was a long time coming. Man, you could tell that everybody was really fired up for it. It was an awesome moment to be out there.

“I was surprised when we elected to receive when we won the toss. I was like: ‘Well, we’ve got to do something big here.’ We had practiced having a cutback right there. Their ‘backer came down and closed the hole, so I bounced it out and the receivers (Jack Reynolds, Zymere Hudson and Za’Haree Maddox) made some great blocks on the end.”

Head coach Tim Devericks: “To score a touchdown on the first play was a credit to our guys for being focussed and ready to go on play No. 1. We executed a play that we’ve run probably 400 times during our practice sessions. Great job by the line. One person (on defense) stuck their head in the wrong place and gave Tate a chance to bounce it outside. The receivers did a good job downfield giving Tate a lane to exploit. Then Tate broke a tackle and finished it off.”

Davie nearly finished a 60-yard scoring drive on its second series, but Summers and Carney fumbled an exchange on fourth-and-goal from the 1 and Ragsdale recovered.

Kristian Lyons, a safety headed to Wingate, set up the second score, blocking a punt and giving Davie possession at the Ragsdale 7. On the next play, Carney went around left end untouched for six points.

Another big play from special teams all but gave Davie its third score. Ragsdale’s punter bobbled the snap and got off a short kick. The line drive found Beaven Arey, who returned it 25 yards to the Ragsdale 2. On the next play, right guard Ethan Doub and right tackle Spencer Williams created a gaping hole for Carney, who walked in for a 21-0 halftime bulge.

After the desperate Tigers gambled on fourth-and-1 from their 24 and lost 8 yards because of Taylor’s ferocious tackle, Davie took over at the 16. Carney covered that distance in three plays.

At that point, when it was 28-0 early in the third quarter, Carney stood at 190 rushing yards with all four TDs. Davie’s offense had netted 190 yards. Carney was responsible for seven of Davie’s eight first downs, the exception a roughing-the-passer penalty against Ragsdale.

Carney finished with 19 carries for 195 yards without playing in the fourth. It was the most rushing yards by a War Eagle since Carney’s 195 in last season’s 49-35 loss at East Forsyth. He matched a varsity career high in rushing yards and posted his 11th 100-yard game. In case you’re wondering, the four TDs were not a career high; he had five in a game in 2019. His 73-yarder was Davie’s longest run in 22 games (Josh Robinson had an 80-yard TD at Mooresville in 2018).

“Obviously it was a great individual effort by him,” Devericks said. “But he would tell you he couldn’t have done it without the guys up front doing their job and giving him a chance to show his God-given abilities. (The offensive line) did an excellent job handling a little different defense than what we thought we might see. They did a good job of communicating and listening to coach (Jimmie) Welch and coach (Spencer) Pasciolla on the sidelines.”

Davie knew it was formidable at the tackle spots with Camden Beck and S. Williams. The interior guys were news starters – Merritt Killian and Zymier Lewis at left guard, Ashton Williams at center and Doub at right guard. The unit played well enough that Davie rolled up 367 yards and averaged 7.1 yards per play.

“They were moving people around,” Carney said. “We knew our two tackles were going to be good and they’re going to be our guys. The guys in the middle really filled their spots and made an impact. I was really happy with how they played.”

Summers, who became the guy when record-setting QB Nate Hampton decided to graduate in December and early enroll at Liberty, struggled in the first half, missing 4 of 6 passes as the two completions only resulted in 3 yards.

The junior found his rhythm in the second half, going 5 of 7 for 112 yards and two TDs. He did not throw an interception. That’s a game from which he can grow.

On third-and-9 in the third quarter, Summers rifled a strike to the graceful Reynolds for a 19-yard score. Three minutes later, he threw a perfect deep ball to Reynolds, who got behind the cornerback at the Ragsdale 39 and cruised to the end zone for a 64-yard score.

“Alex is a competitor,” Devericks said. “He was down on himself (at halftime). He knew there were some throws he would love to have back. I think it was excitement. He knew it was open; he was trying to do it so quick. He relaxed and settled in in the second half.”

It was a night of absolute victory as the other side of the ball showed signs of a defensive revival after allowing 36 and 33 points on average the past two seasons.

Linebacker Gage Recktenwald and DB Arey had tackles for loss on Ragsdale’s first two snaps. Lyons, Arey and the Hunter Rose/Jadon Davis combination blew up three straight plays, the latter a sack for minus-8. After Taylor made a minus-3 tackle, he teamed up with Justin Hayes for a 10-yard sack on the next play.

The senior-laden secondary provides a solid framework for the defense. Bowling, who has signed with Drake, turned in a team-high 14 tackles. Lyons and Arey had eight and seven, respectively. Lyons, Arey, Purvis and Peyton Helton had pass breakups.

“We had a lot of experience coming back in the secondary (including Justus Tatum) and the two linebacker spots (Trevor Richardson and Recktenwald),” defensive coordinator Blaine Nicholson said. “Kristian and Caleb are two of the better safeties that we’ve had since I’ve been here. Justus is a long and savvy player. The only inexperience on the back end is (sophomore) Purvis, but he’s going to be a really good player. Arey bulked up last summer and has turned into a good down safety. He was tearing people up, so we’re super versatile back there.

“Caleb is on every single special teams. He is a dirty-work type of guy. He will go into a scrum and push the entire pile backward. They stayed away from him the majority of the game, but in the third quarter they ran a little slant. The guy he hit on the slant I know is hurting today. They ran a couple of sweeps, and you can’t do that with Caleb. He’s going to fill that alley as fast as anybody.”

Richardson and Recktenwald had nine and eight stops, respectively, including two for loss by Richardson, who is splitting time at nose guard.

“Trevor made plays at both spots,” Nicholson said. “That’s unselfish. Not many folks want to go from linebacker to nose guard. He doesn’t care; he just wants to be on the field.”

The DL was the defense’s uncertain area during preseason. Coaches don’t hesitate when asked who the leader is there – Taylor – but the rest of the crew arrived in Jamestown with virtually zero varsity experience.

“We did have a lot of people we were uncertain about, but they all played really well,” Nicholson said.

“We have one dude who is tough to block no matter who is on the other side of the ball,” Nicholson said. “Avery absolutely created havoc. He destroyed them when they ran to his side. He’s a manchild. He’s definitely the leader on the defensive line.”

Mason Shermer had five tackles. Rose had two sacks. Hayes and Davis had one sack as Davie limited the Tigers 60 rushing yards on 35 attempts, 3 for 13 on third-down conversions and 3.2 yards per play. Their punter was summoned nine times.

It was the finest regular-season effort by the defense in 21 games, dating to a 21-14 win over North Davidson in August 2018.

“It’s awesome to see that Hunter (who played tight end in 2019) had some success in his first game on defense,” Nicholson said. “(Silas Fuller, a first-year Davie player at nose guard) was taking on double-teams and keeping the linebackers clean. Mason is probably more of an edge guy, but we’re asking him to play inside because we’ve got Avery. Any time there’s a pursuit angle, he’s the first one there. We’ve got a bunch of effort guys.”

And how about the kicker’s tackling ability. When it was 21-0, Ragsdale’s Tyrell Carmichael dropped the kickoff at the Ragsdale 11 and gathered control in time to find daylight. He was gone if Moure doesn’t upend him at the Ragsdale 33.

“Willy comes to my defensive back meetings and tells me every day he could be a DB,” Nicholson said. “We’ve got to keep Willy right for the kicking game, but he’s not somebody who is going to kick it and run off to the sideline. He saved a touchdown. We were pumped up for Willy and Willy was pumped up, too. He forgot to go get his tee after he made the tackle. So he was fired up.”

Notes: Due to Governor Cooper’s statewide COVID restrictions, the game was played in front of 100 fans. The game was moved from Friday to Thursday because of the weather forecast. … Brodie Smith got his feet wet in the first half and took over for Carney in the fourth. The sophomore was productive (12 carries for 48 yards). … Ironically, Davie committed the game’s only two turnovers, both fumbles. … Davie’s discipline was in midseason form with only three penalties.

Williams’ 47 points not enough in losses