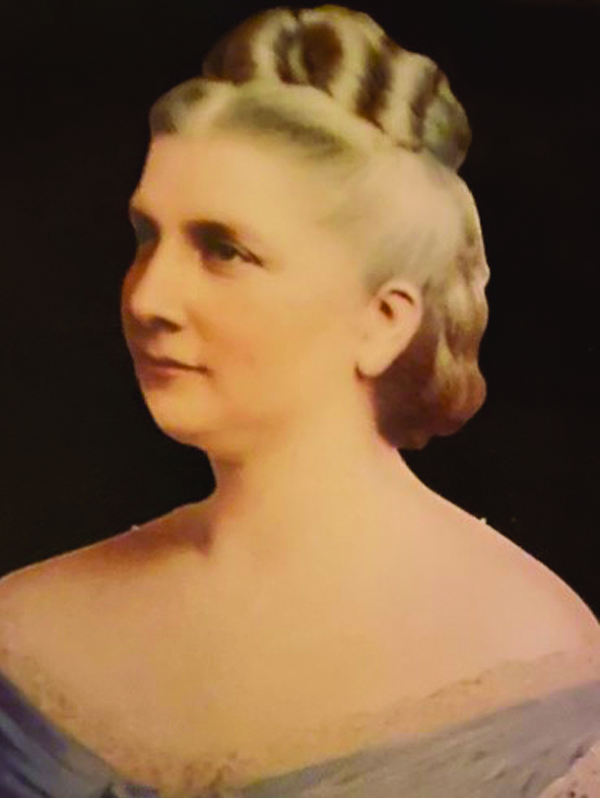 James Buchanan is the only United States President to date who was never married.  When his 11-year-old niece, Harriet Lane, became an orphan, she said that she wanted her Uncle James to be her guardian. He was pleased and quickly agreed to fulfill that role.

Harriet was a bit of a tomboy and was active. Mr. Buchanan handled all situations concerning Harriet without complaint. He sent his niece to private schools and then to Visitation Convent in Georgetown. Harriet grew up to be a poised, charming young lady, who was well-educated.

When Buchanan was appointed Minister to the Court of St. James, Harriett went with him to England.  She  was impressed by all the trapping of royalty.  Queen Victoria was equally impressed the young American, and gave her the rank of an ambassador’s wife.  That meant that Harriet had special privileges while living in England.

When James Buchanan was elected President in 1856, he took Harriet with him to the White House. He asked her to serve as hostess. She was delighted and embraced that role. Harriet added a bit of royal style to White House entertainment. It seemed good to have a happy young hostess who added a bit of gaiety to life in the White House after the somber years in which the sad Pierce family lived there.

At the time that James Buchanan served as President, the United States was in terrible turmoil concerning slavery and states’ rights. Mr. Buchanan seemed to make little effort to alleviate the problems—if he tried to keep the country united, he was certainly not successful. The tensions in the country even presented problems when Miss Lane planned dinner parties at the White House. She tried to seat dignitaries at the dinner table so that political foes would not be side by side and everyone would still be seated correctly by rank.  That took some juggling as tensions between the North and the South continued to rise.

James Buchanan did not seek a second term. He had not been able to solve the problems that faced the country. After one term, he was happy to leave the office. He left a note for the incoming President, Abraham Lincoln, which said, “If you are as happy, my dear sir, on entering this house as I am in leaving it and returning home, you are the happiest man in the country.”

Harriet was probably not as happy to leave the White House as her uncle because she had really enjoyed serving as hostess.  The people who judge such things give Harriet high marks as a hostess. She certainly changed the atmosphere of that place with her radiant personality and her love of entertaining, which included dancing.

Harriet and her Uncle James went back to his home in Lancaster, Pa. A visit to that house is most interesting. Harriet’s bedroom is decorated elaborately.  Her parlor is just across the hall from the dining room in the Federal-style house. There are portraits of Queen Victoria and Prince Albert on the wall of that room, which show Harriet’s continued interest in British royalty.  She lived at her uncle’s home, which was/is called “Wheatland” until she was about 36.  She then married a banker from Baltimore, Md., Henry Elliott Johnson. The Johnsons’ had two sons, neither of whom lived to adulthood. Wthin an 18-year period, Harriet lost her sons, her husband, and her uncle, James Buchanan.

Harriet then  moved back to Washington where she had made many friends.   While she lived in Washington, she enjoyed traveling and collecting art.

Harriet Lane Johnson died in 1903 at the age of 73. She left her valuable art collection to the Smithsonian Institute. The Smithsonian named Harriet, “the first lady of the National Collection of the Fine Arts.” She also left a generous sum of money to endow a home for invalid children at John Hopkins Hospital in Baltimore, Md.

The book, The First Ladies of the United States of America, by Margaret Brown Klapthor and Allida M. Black in describing that facility says, “It became an outstanding pediatric facility and its national reputation is a fitting memorial for the young lady who presided at the White House with such dignity and charm. The Harriet Lane Outpatient Clinics serve thousands of children today.”

The United States’ only bachelor President, James Buchanan, is rated at or near the bottom on surveys concerning the effectiveness of the presidents. His charming niece gets decidedly higher marks as a person and as a White House hostess.

Life’s First Ladies Portraits of Grace and Leadership says this concerning Harriet Lane, “Some scholars see her as one of the first genuinely influential women at the White House, in part because of her popularity and because of the evidence that suggests that Buchanan listened to her advice, particularly on personnel matters and issues related to the nation’s neglected Native American population.”

The book, First Ladies, by Carl Sferrazza Anthony says, “Harriet received pleas for influence from Indian tribes. A Chippewa leader begged her to stop the illegal liquor trade and the expulsion of missionaries from the reservation by dishonest federal agents.  She not only looked into the case, but started efforts of her own to meet the tribe’s educational and medical needs. Shortly thereafter, “Nunc” (her uncle) informed her that she was being hailed as their “great mother” and that “Harriet” was becoming a namesake for Indians’ babies.”

Harriet Lane was not only a successful White House hostess, but also a citizen who contributed much to the people of the United States.