Lawhon takes over in crunch time win for JVs 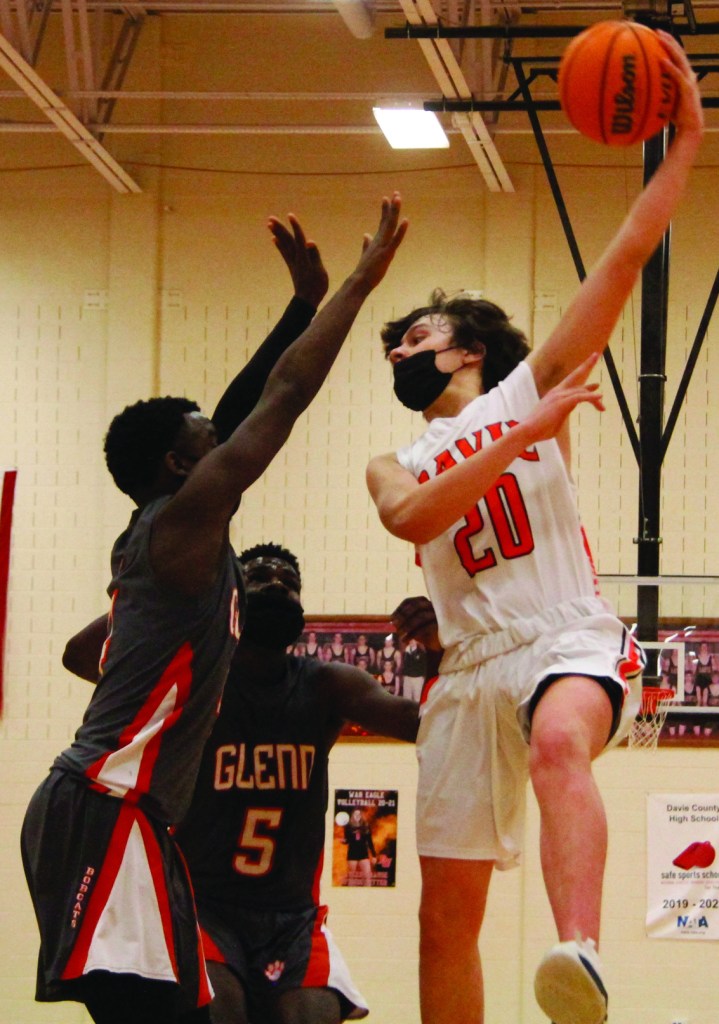 But four days before Lawhon’s electric fourth quarter against East, the War Eagles underwhelmed in a 35-27 loss at Glenn on Feb. 5.

They bore little resemblance to the team that sprinted to a 20-0 lead on Feb. 3 and coasted to a 43-31 victory over the Bobcats. This was the first game without No. 3 scorer Burke Rosenbaum (8.1 ppg), and Davie was dismal offensively, posting an output that was 21 points below its average.

After rallying to tie Glenn at 25 at the end of the third, Davie only managed two points in the fourth.

Davis and Lawhon had 11 points each, but got little help. Zeb Pilcher and Ethan Ratledge had two each and Luke Clark one.

There’s no such thing as a one-man team, but Lawhon was the rising ride that lifted Davie’s boat against visiting East Forsyth on Feb. 9. The freshman guard turned into Kobe Bryant in the fourth, scoring 13 of the War Eagles’ 17 points – Davis had the other four – and allowing them prevail after blowing an eight-point lead.

“We were hanging on by our fingernails, but we held on,” coach Tim Kenney said. “I’m really proud of the boys. We were a totally different team than the game before. We played with confidence and control.”

Most of what will be remembered from this revenge win – East beat Davie 58-52 on Jan. 22 despite Rosenbaum’s seven 3-pointers – is Lawhon’s heroics. But without five sophomores who got the nod and validated Kenney’s game-opening move, Davie might have sealed a losing season.

Although Davie trailed 19-17 at the end of the first, it was staying stride for stride because of five points from Pilcher, four from Aidan Froelich, three each from Bryce Bailey and Levi Miller and two from Davis. Davie did not feel bad being down by two after East rained in five 3-pointers.

“This was a total team win because I started five sophomores,” Kenney said. “Aidan hit two huge baskets in the first quarter. Bryce, who doesn’t play much, hit a huge 3. Look at any one of those plays in the context of the entire game, we don’t win without them. We got 10 points from guys who don’t get to play all that much.”

Davie continued to hold the upper hand through the third, 41-33. At that point, Lawhon wasn’t having a vintage performance. He was out of sync and 2 of 7 from the floor.

But Lawhon stole the show after East cut its deficit to 41-38. He drove, drew a foul and hit two free throws. He used a mean crossover dribble. With the helpless defender buckled over, Lawhon drove for two. He stole a pass and sailed in for a layup. After Davis snatched an offensive rebound and converted a jump hook, Lawhon went back on the attack, getting fouled and hitting both. After East scored five straight points, Davie broke the fullcourt press, Lawhon went to the basket and made one free throw to give Davie a 52-50 lead.

East clawed back to take a 54-53 lead with 1:08 remaining. But every time the visitors fought back, Lawhon had an answer. He dribbled the ball downcourt and swished a turnaround in the defender’s face for a 54-53 lead at :58.

Davie got a defensive stop and East had to foul. Lawhon hit both free throws for a 56-53 lead at :22. Davie got another stop and Davis extended the lead to 58-53 by making two foul shots at :12.

East never caved. It buried a 3 at :05 and fouled Davie at :03.2. The end was nerve-wracking. A War Eagle missed the front end of a one-and-one, and East had one last chance down two. An East player got behind the defense on an inbounds play and had an open lane to the basket, only to miss the hurried layup as the clock hit zeroes. Lawhon reached in from behind to disrupt the shooter’s concentration.

Lawhon hit 7 of 8 foul shots, made four steals and finished with 18 points as Davie evened its records at 5-5 overall and 4-4 in the Central Piedmont Conference.

“Losing the close games earlier in the year (41-37 to West Forsyth, 58-52 to East and 51-47 to Reagan) I think really benefitted us because we held our composure much better this time,” Kenney said.