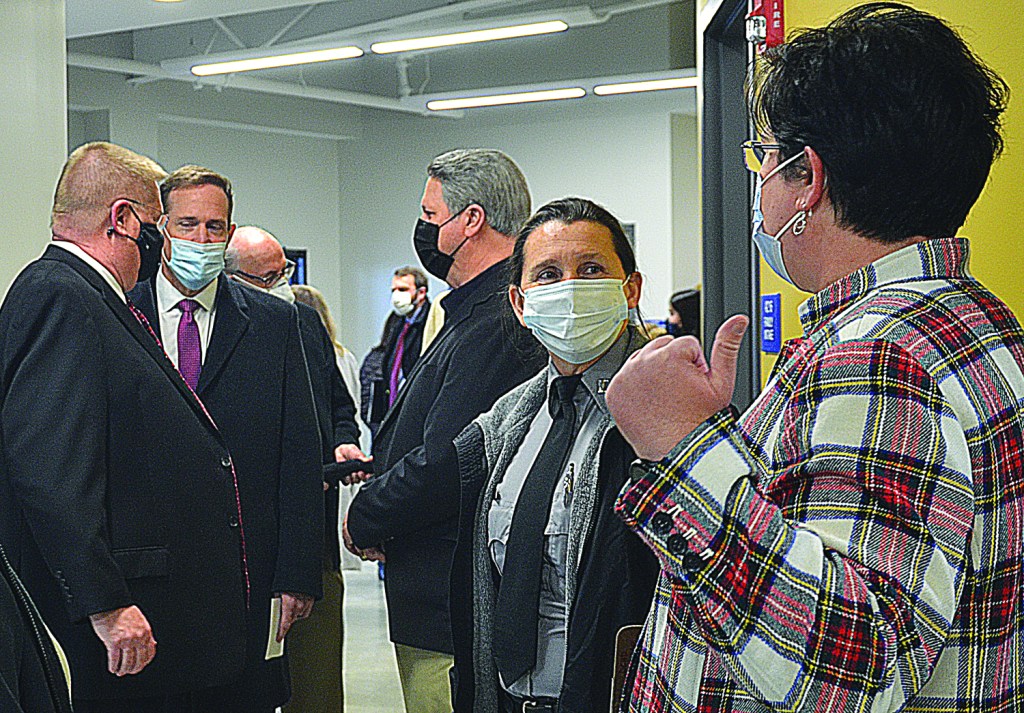 The new Davie County Government Center on Farmington Road was officially opened Monday, and the sheriff’s and health and human services departments will be moving in for the next few weeks.

The 68,000 square-foot facility was praised as a great public/private partnership that will save Davie taxpayers tens of thousands of dollars.

A capital improvement study revealed that both agencies needed new buildings, not only for more space but to handle modern technologies. The problem was a $30 million price tag.

“That’s a heavy lift for Davie County,” said Terry Renegar, chair of the board of commissioners. “We started to think, what else can we do? Good people came together and we came up with a solution.” 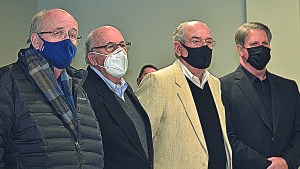 BRJ Properties (Bill Junker, Rocky Johnson and Joe Harris) had bought the building, and were looking for tenants. They came to the county with the idea of turning the old furniture store into the new homes for the sheriff’s and human services.

“They said we’ll give you a good deal on the land and the shell … and you do the upfit,” Renegar said.

The result is a 30-year lease in a building that should be able to house both agencies for at least that long. The county spent less than $8 million for the upfit, saving taxpayers tens of thousands of dollars, he said. “This was a huge collaborative effort.”

Congressman Ted Budd was the guest speaker, and praised the county for being fiscally responsible. “You all deserve this. I think there’s a lot Davie County can offer Washington, D.C.”

Bill Junker said the three were proud to be a part of the project, and he wished the building’s original owner, Clyde Hendricks, was around to see it’s most recent use. “It’s going to be a great facility for the community,” Junker said.

“The more I travel elsewhere, the more I love Davie County,” Harris said, adding that the three built a fleet maintenance building for the sheriff’s department to use for free for the first two years. After that, the county can walk away or agree to a  lease agreement. “We’re going to work that out, too,” Harris said.

Rocky Johnson said the three partners kept an eye on the upfit, and were amazed at the work of local architect, John Fuller, and Shelco Construction, the general contractors. “We’re proud to be a part of this.”

Sheriff J.D. Hartman now has an office in the basement of the courthouse. A former sheriff told him that office was opened some 35 years ago, with the county telling that sheriff the office would be only temporary. Now, the sheriff’s office has 140 employees scattered over 11 buildings. All but those associated with the detention center (which could be the next big capital outlay project) will move to the new location.

When Suzanne Wright interviewed for the health director job in 2008, she asked about facilities. She was told to expect new ones in two to three years.

In the meantime, services including the health department, senior services, veterans affairs, social services and domestic violence prevention were merged into health and human services. All but about 12 will be re-located to the new space. There are plans to open a pharmacy and an adult primary care services on site, she said.

The building is on Farmington Road adjacent to I-40.