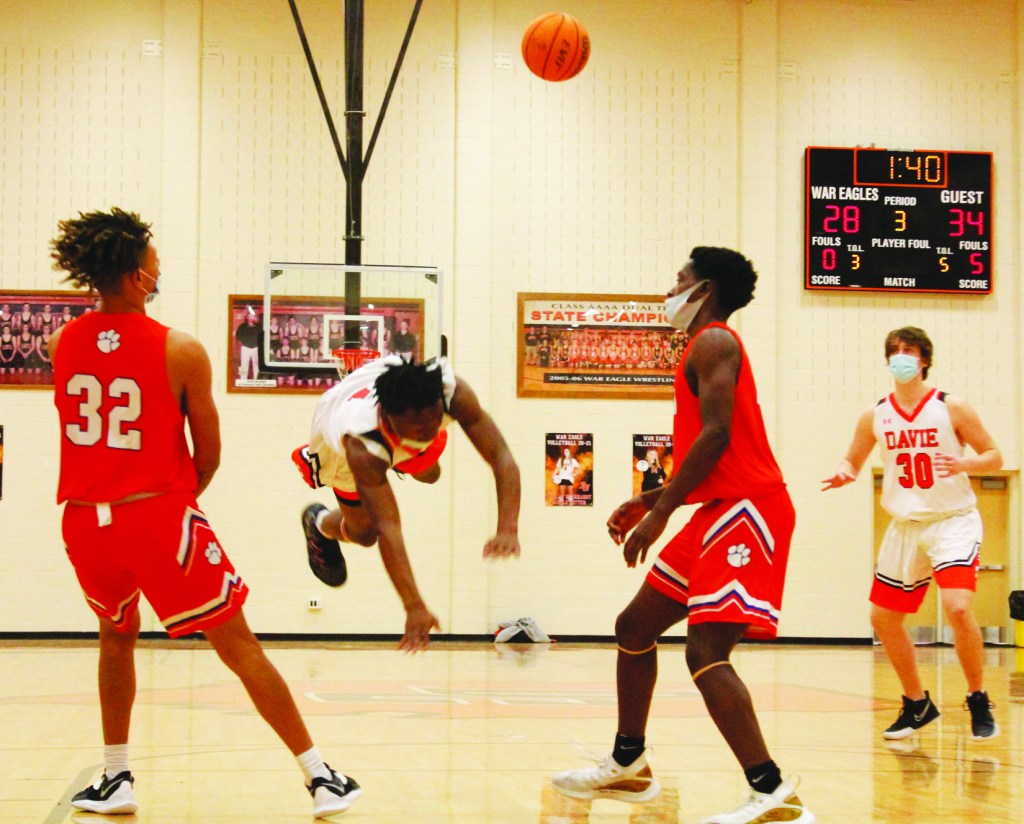 Davie and Glenn met twice in three days. In the first meeting in Kernersville, the War Eagles pulled off a classic 65-60 win. It will live long in Davie memory because the Bobcats were undefeated.

In the rematch at Davie, the War Eagles turned a 37-30 deficit into a 48-42 lead with only 59 seconds left. The ending was excruciating, Glenn rallying to force overtime and surviving 59-55.

At the end of last week, the top three in the Central Piedmont Conference standings were Glenn (6-1), Reynolds (5-1) and Davie (3-3). Glenn and Reynolds have another matchup. Two of Davie’s three losses have been in OT, the other being 66-62 to Reynolds. How close is Davie to being in first place in the final week of the season? Think: That space between your thumb and forefinger as you hold a Q-tip.

At Glenn on Feb. 3, the Bobcats came in 7-0 overall and 5-0 in the CPC after escaping a pair of squeakers (49-48 over East Forsyth and 57-56 over Reynolds). But they were rocked by Davie’s blistering start.

Avery Taylor, Za’Haree Maddox, Luke Williams and Zymere Hudson had baskets during a 14-0 blitz out of the gate. Included was a beautiful fast-break connection between Maddox and Hudson, who jumped to deflect an inbound pass from under Glenn’s basket. Hudson got the ball and dished to Maddox, who gave it right back to Hudson for a layup.

Glenn finally got on the board from the free-throw line with 2:44 left in the first quarter. It was 0 for 10 from the floor before getting a fast-break dunk at 2:10. But after the dunk, Alex Summers and Jack Powers came off the bench and confidently stroked 3-pointers as Davie buried 9 of 12 shots in the first.

“We were primed and ready,” coach Mike Absher said. “Playing on the road and being able to set the tone like that was huge. We have confidence that’s high because we played Reynolds tough the second time around and Glenn beat Reynolds by one. Our message was: We belong in this game. They’re undefeated for a reason, but let’s go and compete at a high level.”

The half ended with perfect end-of-clock execution. Maddox attacked the lane and kicked it out to Summers, who nailed a triple to give Davie a 33-19 halftime cushion.

“That’s what our offense should look like,” Absher said. “It ended with Za’Haree on a penetration and kick to a guy we know can make shots. I think that bucket carried over into the great start in the second half.”

Indeed, the second half started with Davie adding to its momentum. Justus Tatum hit a 3 and Williams hit Hudson on the break for a 38-19 lead. Taylor, the center, got the ball above the key. He drove like a guard and got an and-one. Then Hudson intercepted a pass and got a layup.

“That is something he’s added to his game,” Absher said of Taylor’s dribble drive.

Maddox gave Davie its biggest lead at 47-22 with a dazzling move. He dribbled around the back with his left hand. A spin move broke the defender’s ankles. Another defender stepped up as Maddox drove, but the junior point guard did an up-and-under to score.

“He has worked really hard on his skill development,” Absher said. “Coach (Bruce) Wallace has helped so many of those guys. It’s great to see when that work pays off for them.”

The Bobcats refused to roll over. They ripped off 21 unanswered points to cut Davie’s lead to 47-43. Maddox righted the Davie ship, hitting four straight free throws. Hudson cut through the lane, got a pass from Maddox and scored. Tatum buried a 15-footer. When Maddox took a charge – his second of the game – Davie’s lead was 55-44.

Back came the Bobcats, who used an 11-4 run to climb within 59-55 with 1:40 remaining. Here was perhaps the backbreaker: Maddox was trapped near midcourt. He found Hudson, who bounced it to a cutting Taylor. That basket provided a 61-55 lead at 1:21. For good measure, Maddox foiled Glenn’s fullcourt press by passing to Tatum, a layup that made it 63-57.

“As hairy as it got, we made some big buckets,” Absher said. “When they were pressing us, we were able to find the seams and get some layups.”

While Maddox is averaging 16.1 points, supporting cast members have flourished after spending last year in the shadows. A season ago, Hudson (1.2), Taylor (1.1) and Tatum (0) did not average three points a game combined. The trio has paid their dues and now look at them. Hudson is averaging 9.4, Taylor 7.4 and Tatum 6.8. (Williams is the No. 4 scorer at seven.)

“It’s beautiful to watch,” Absher said. “When we got started in the middle of the summer, those guys were committed. They really worked hard to make themselves better players.”

What seemed like a dream comeback win for Davie turned into a nightmare on Feb. 5. CJ Vaughn and visiting Glenn ripped Davie’s heart out in the final minute of regulation and OT.

Glenn was in control at 37-30 when the third quarter ended, but the War Eagles had an answer. Taylor hit a triple, Maddox made two at the line and Tate Carney finished a fast break as Davie charged ahead, 38-37, less than three minutes into the fourth.

Maddox converted a double-pump layup, then stole the ensuing inbound pass, was fouled and made one free throw, resulting in three quick points. Maddox scored on another drive, then hit a free throw on the next possession. Taylor scored as he was fouled. He missed the free throw, but Powers rebounded. Davie milked 50 seconds off the clock before Powers found a wide-open Taylor underneath. Taylor’s bucket provided a 48-42 lead at :59.

But just when Davie seemed poised to stay in the CPC title hunt, everything turned. Glenn banged a 3 at :42. Maddox missed two free throws, but he rebounded his second miss to give his team possession with a 48-45 lead. Maddox was fouled and missed both at :32. Ten seconds later, Vaughn was hitting a game-tying, fadeaway 3. Davie held for one shot, but Maddox missed a rushed, contested 3 at the buzzer.

Glenn dictated terms in OT and dealt Davie (5-3) a hairbreadth loss. It spoiled a sterling night for Maddox, who scored 27 points on 14-of-18 free-throw shooting. It was his third 20-point outing. Yes, all four misses at the line came in the final seconds of regulation, but Absher pointed out that a hundred moments can change the outcome of a game. If it weren’t for Maddox, Davie’s not close.

“He’s a huge part of where we are,” Absher said. “He’s made a lot of big baskets and big free throws in his two years on the varsity. He’s obviously a big reason for the success we’ve had the last year and a half. He’ll have another opportunity, and I dare say the results will be different.

“It wasn’t any one missed free throw or one missed shot. Basketball is a culmination of the minutes played. We played 36 minutes.”

Taylor (10), Tatum (five), Summers (four), Powers (four), Williams (three) and Carney (two) had the other 28 points for the War Eagles, who were missing their No. 2 scorer, Hudson, who had to go out of town.

The difference in Davie being 4-2 or 3-3 in the CPC was razor-thin.

“That one was gut-wrenching to be that close,” Absher said. “We made the comeback, had the lead and was in control – and then it slipped away from us.”