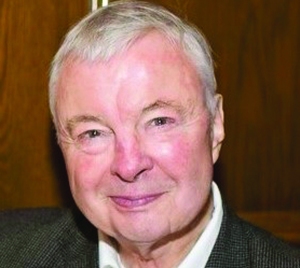 Judy’s best friend, he loved, honored and cherished her – cliché but true. He believed in never letting a day pass without making her laugh. They met in the ninth grade when he made her laugh asking for help to sneak into the circus. That moment turned into a 60-plus year adventure. Happy memories of his love for sunsets, comedy, pranks, and his Elvis performances transcend the generations of his family.

He was always at home in Massachusetts whether it was his beloved Holyoke, Williamsburg, or lastly South Hadley before relocating to spend his final years in North Carolina. He started his schooling and athletic years in Holyoke before his father’s business took the family to Mt. Olive, Ill. He graduated from Mt. Olive High School with the class of 1959 where he was an Illinois all state football player. After being widely recruited he accepted a football scholarship at the University of Missouri, Columbia where he lettered under legendary Coach Dan Devine. Aware of his bigger than life football career, his grandson, George, would frequently remind him to “Be athletic” as he battled in the biggest game of his life, cancer. Once again, he was a standout as he ran the field and overcame the obstacles. But cancer achieved the final tackle.

A man of many, some say magical, talents he successfully wore many hats. Starting as a delivery boy for Droste’s Market he spent more time with the customers than at the store. He enjoyed people and had the gift of gab that later translated into a successful insurance sales career. After winning a bet with a friend his entrepreneurial instincts and pioneering spirt lead him to create The Original Chimney Sweep Co. growing into the New England School of Chimney Sweep, the first such school legitimately accredited by Massachusetts. When the state initially rejected his accreditation application because, “An education B.A. was required,” he quickly eliminated the roadblock. After all, what does a college football player study? Yes, he completed his bachelor’s degree ibn physical education at the University of Missouri. Diploma produced; problem solved. After watching his first two daughters wed in the early 80s without a decent video, he said, “I can do this.” His enterprising instincts kicked in and “A Good Time Video Productions” was born. Of his numerous video production experiences, he was most honored to have produced the US Naval Academy, Annapolis, Commencement Ceremony video for five consecutive years.

He was born to Everett David Hinkley and Julina Margaret Nolan on Aug. 15, 1940 in North Adams, Mass.

A celebration of his life will be held at a later date.