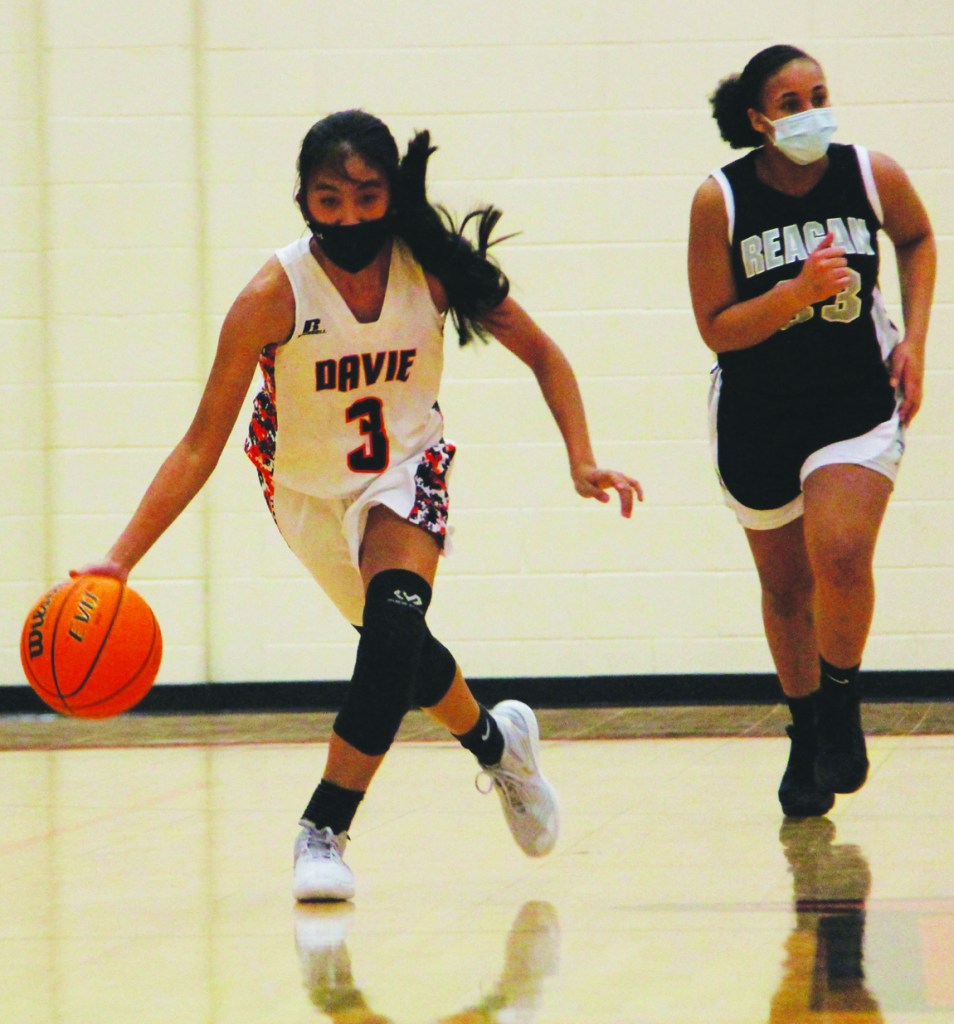 Freshman Gracie Spicer pushes the ball against the Raiders.

Kenadi Gentry, Sydney Phelps and Gracie Spicer delivered points at crunch time and the Davie JV girls basketball team got the monkey off its back in the form of a 37-34 home victory over Reagan on Jan. 26.

Goosebumps of happiness washed over Davie when the final horn sounded. The moment saw the end of an 18-game losing streak. The War Eagles dropped the final game of the 2016-17 season, went 0-15 in 2017-18, did not have enough players to field a team the past two seasons and started the 2021 season with losses to West Forsyth and East Forsyth.

After falling behind by four at the end of the first quarter, Peyton Spaugh and Hannah McMillian lifted Davie to a 19-16 halftime lead.

The Davie surge was extended to 22-9, which meant a 28-19 lead. Barbara White beat the third-quarter buzzer with a putback that sent Davie into the fourth with a 30-21 advantage.

But, alas, it was far from over. Davie missed its first nine shots in the fourth, during which time the Raiders scored nine unanswered points to knot things at 30.

Right when Davie was wobbling, Spaugh inbounded to Gentry, who drove for a basket and a 32-30 lead with 3:03 to go. After Phelps hit two free throws, Spicer drained a 19-footer to make it 36-30. Reagan made one last push, scoring twice to cut the margin to 36-34.

Gentry made a crucial free throw, Reagan missed a 3-point try at :07 and Davie celebrated the its first win since a 39-18 decision at Mt. Tabor in February 2017. Debbie Evans was the coach then. The star in that one was Kayana Caldwell with 19 points.

Spaugh was the biggest reason for this breakthrough, scoring 13. Gentry and Phelps had seven each and McMillian four. Gracie Wilson, White and Spicer had two apiece.