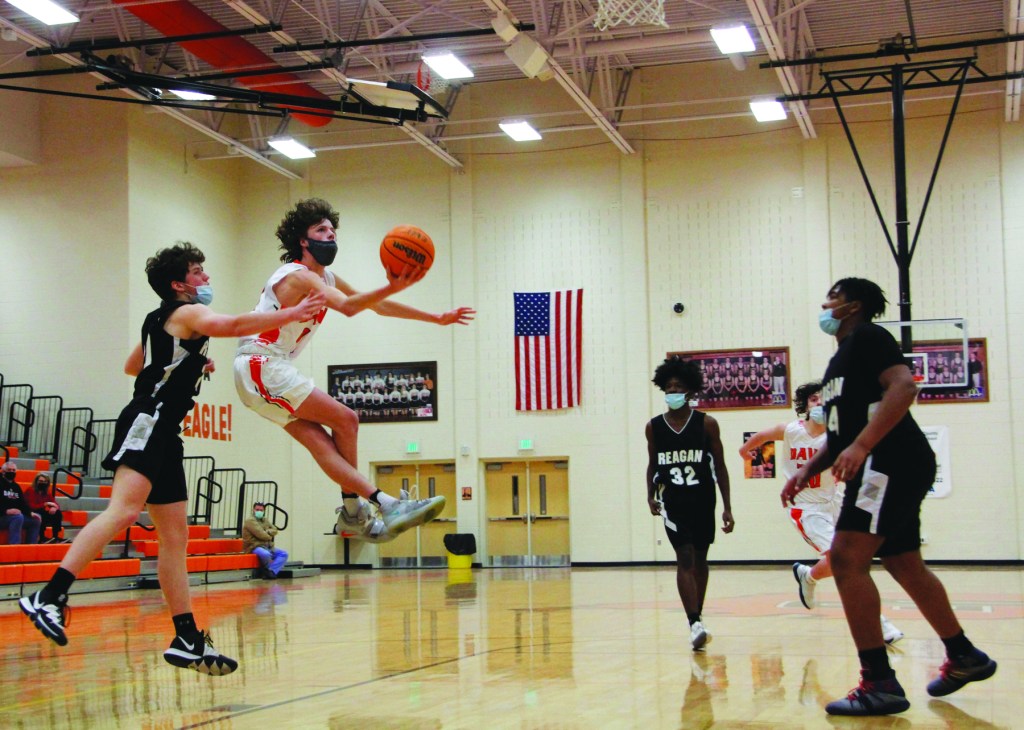 Freshman Colman Lawhon hangs in the air as he attempts a scoop shot against Reagan. - Photo by Mark Floyd

While Davie’s JV boys basketball team lost by six or less points for the third time when it hosted Reagan on Jan. 26, it was not entirely a loss.

The War Eagles were facing a formidable team that had beaten four opponents by 18, 29, eight and 11 points. They had every chance to give up when they faced a 41-31 deficit. But they fought valiantly before falling short 51-47.

“I’ve coached a long time and I’ve never been prouder of a team than I am with this one,” coach Tim Kenney said. “I feel bad for the kids. They played hard enough and good enough to win. Things just didn’t go our sway when we needed it to.”

Ethan Ratledge electrified the War Eagles. He scored on an offensive rebound. He grabbed another offensive rebound, scored, was fouled and made the accompanying free throw. He stole a pass, sped down the floor, drew a foul and hit both. When this Ratledge flurry was over, Davie was within 43-38. (Ratledge would factor into another run.)

Coleman Lawhon hit a 15-foot tear drop, but Reagan scored the next five to go ahead 48-40 with only 1:58 left. Yet Davie fought back again. Hunter Davis and Burke Rosenbaum executed a give-and-go, with Davis scoring at 1:38. Lawhon picked a ball handler’s pocket. Ratledge rebounded Lawhon’s miss and passed it back to Lawhon, who connected from the elbow at 1:23. After Reagan turned it over, Rosenbaum drove, switched to the left hand and nailed a floater at :57. Ratledge got a steal and pitched to Lawhon, who got fouled and hit 1 of 2 to bring Davie within 48-47. That was a 7-0 run in 53 seconds.

Reagan went 1 of 2 at the line, Ratledge rebounding the miss with Davie down 49-47. Unfortunately, Davie committed a turnover. It had to foul at :11 and Reagan hit both to finally put Davie away.

But Kenney could take solace in his team giving the 5-0 Raiders fits in their closest game of the season.

Ratledge, who was averaging three points a game, came through with nine to go with six rebounds, three assists, two blocks and two steals. The high-energy backcourt of Lawhon (15 team-high points, four steals) and Rosenbaum (11 points, three steals) left everything on the floor.

“They had to go against some really quick guards, and they did a really good job with it,” Kenney said. “They are a tough tandem to guard. Coleman is relentless (defensively). With his motor, he kind of reminds me of Corey Heiner in terms of his intensity. I mean, he is all business all the time, and he plays equally hard on offense and defense.”

Zeb Pilcher (five points, 11 rebounds, six assists) had an impressive line as Davie had to deal with Davis’ foul trouble. Davis was averaging 13.6 points before spending a good chunk of this one on the bench and getting limited to four points.

“Levi Miller (who had three points) is about 5-9,” Kenney said. “He was asked to go inside and guard some big kids, and he did a great job of doing it. He was undersized, but he fought and battled the whole way.”

The War Eagles gained separation in the third quarter and won for the first time in three games in Winston-Salem on Jan. 29.