Officials get close up view of Blue Heron Trail area 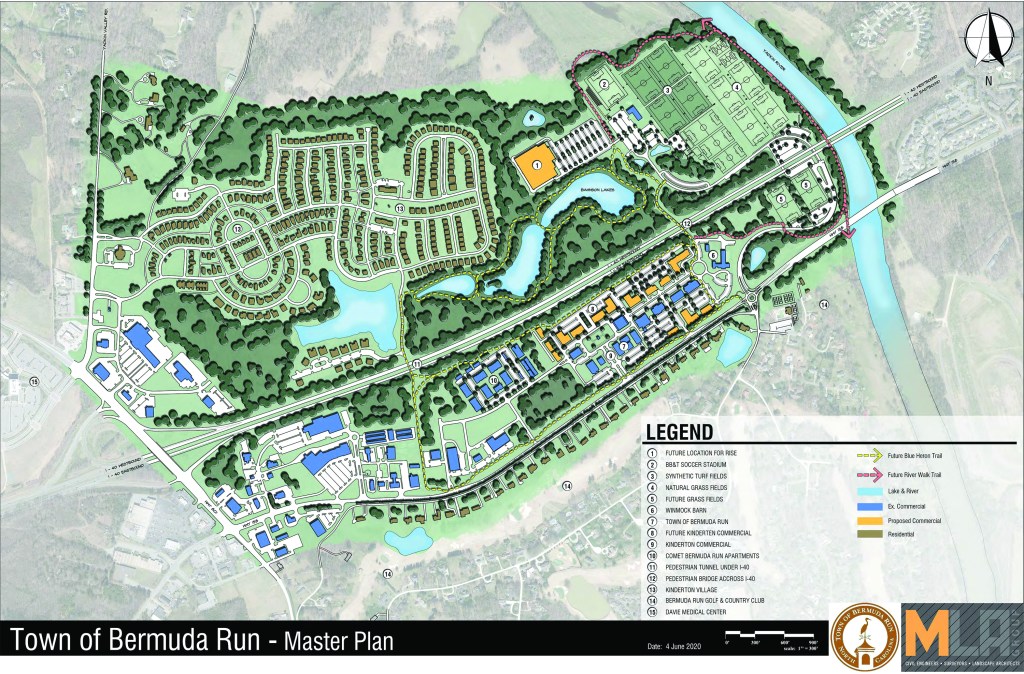 BERMUDA RUN – While getting positive news from the N.C. Department of Transportation about moving forward with the Blue Heron Trail project in 2021, the town council here heard about continuing efforts for what Mayor Rick Cross refers to as “this vision of a connected Bermuda Run.”

In the first meeting of the new year, Cross spoke about a recent tour of the property bordering I-40 East that stretches from the pedestrian tunnel to the new pedestrian bridge with representatives of several government offices.

The undeveloped tract, which is owned by the Hillsdale Group, features the Bahnson Lakes and rough pathways throughout the unique property, which includes an old boat house and a dam.

“We wanted to show them what this was, what this potential trail area is and also some of the historical significance,” Cross said, “and we wanted to pick their brain on if there might be a possibility for federal grant money or that type of thing.”

Cross said that it was a bit of a challenging hike through the lake trails. “Well, there really aren’t trails. It was a little rough out there. We were out there for two and a half or three hours.”

“We thought a couple of times we were going to have to leave Lee behind,” Cross said with a laugh. “We started at the tunnel and walked them through, and I intentionally wanted to walk them up to the pedestrian bridge so we could stand at the pedestrian bridge and look across the bridge at WinMock and tie that back over to that area.

“That’s what we get for some of the investment that’s made, and this is what we would like to do here. We don’t know at this point, but we’re going to pull every lever we can to continue to push this vision of a connected Bermuda Run.”

Kinderton Village is just to the north and west of the property while the new RISE Indoor, a massive indoor multi-sports facility that is under construction, is north of the eastern side of tract, and Truist Sports Park is to the east.

Of course, on the other side of I-40 is the Kinderton Commercial area, which includes WinMock, and the main section of the Blue Heron Trail project runs parallel with US 158.

That project, which has a $2 million price tag, had to be put on hold last year because of NCDOT budget challenges. Eighty percent of the projected construction cost is to be paid by federal highway funds. However, NCDOT has reached out to the town about proceeding to bid the project and worked out the details so that Phase I can be completed this year, according to Rollins.

In other highlights from last Tuesday night’s meeting, the council:

• Presented checks of $4,000 each to Lisa Foster of Family Promise of Davie County and Chad Brown of Wake Forest Baptist Davie Medical Center. The money was raised from more than 100 donations made for the Bermuda Run Community Christmas Tree project.

Cross said it was the idea of three community members – Roseanne Peacock, Sharon Reid and Christy Schafer – “and the number of people who jumped into this was amazing. It’s something that will be with us for quite some time.”

Foster thanked the council members and said that the donated funds “will help us keep families in their housing. The phone calls are really starting to pick up now with the new year and all sorts of changes happening.”

• Heard from Rollins that Brian Myers, tax administrator for Davie County, will appear before the council Feb. 9 to discuss the tax revaluation process.

• Also heard from Rollins, who said that Asplundh, which is contracted by Duke Energy to do tree trimming, will be soon be trimming Leyland Cypress trees along US 158.