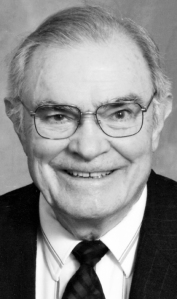 Educated in the public schools of South and North Carolina, he entered the US Army Air Force in 1943 and served as a flight engineer and gunman aboard the B-17 and B-29 during World War II.   Leaving the Air Force, he attended The University of North Carolina at Chapel Hill, graduating in 1952 with a bachelor’s degree in business.  Working first at CIT Credit and Sears Roebuck & Co., he then started his own real estate firm, Hyatt Realty Co., in 1957.  As one of the oldest members of the Winston-Salem Board of Realtors, now WSRAR, he served on several committees at the local and state level and was vice president of the local association. He operated his company until his retirement in 2006.

Being predeceased by his wife and siblings, he is survived by: a son, Wade Julian Hyatt; 2 grandchildren, Andrew Julian Hyatt (Viaynet) and Ashley Nicole Hyatt; daughter-in-law and caregiver, Leigh Walker Hyatt; and many nieces and nephews.

Mr. Hyatt was a member of the American Legion, past member of the Sertoma Club and a long-time ex-officio member of the Roddick Sunday School class of Knollwood Baptist Church, where he became a member in 1959.  From his early days there, he dearly loved and appreciated all its members and seldom missed a service, taking pride in his attendance record.  Mr. Hyatt was a lifetime member of the UNC Alumni Association and the Elks Lodge.  Being active in NC politics, he served as an officer in several capacities, including vice chair of NC Democratic Party and was active in several political campaigns.  He was an outdoor advocate who liked hunting and fishing. He enjoyed gardening and growing vegetables to give to neighbors and friends. He was fond of history and prided his knowledge of world, national and state history, attending several history studies.

A private graveside service will be held.