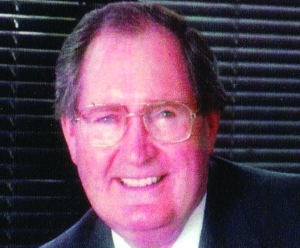 He was born in Cooleemee on Sept. 23, 1934 to Baxter and Anne Young. He enjoyed a life of dedication, leadership and service. He was a graduate of Oak Ridge Military Academy in 1952, followed by entering Wake Forrest University which was interrupted by induction into the U.S. Army in 1954. A proud moment of his youth was the accomplishment of earning the rank of Eagle in the Boy Scouts. His pride was magnified when his son and two grandsons became Eagle Scouts. In 1956 he married Eleanor Tatum in Davis Chapel at Wake Forest University.

He started his professional career in 1958 with the Southern Bakery Co. in Greensboro. Rising quickly through ranks, he was first transferred to the Washington D.C. plant, then to Atlanta in 1962, and subsequently transferred back to Washington, D.C., where he became the plant manager. His supervisor’s performance assessment stated that it was his “enthusiasm” that was his key to success.

In 1967 his management skills offered the opportunity to work for Truland Electrical Corp. in Arlington, Va. where he spent the majority of working years rising to the position of executive vice president. Retirement came in 2002, when he and his wife returned to their North Carolina roots in New Bern. The couple joined First Baptist Church where the music program and choir were sources of commitment. Craven County Electrical Board, and Greenbrier golf community were additional areas of service and pleasure. He lived the life of a good and faithful servant.

A private funeral service (family only) will be held at First Baptist Church in New Bern, with a private burial at the Jerusalem Baptist Church in Mocksville. A public celebration of his life will be announced at a later date which will be open to friends.