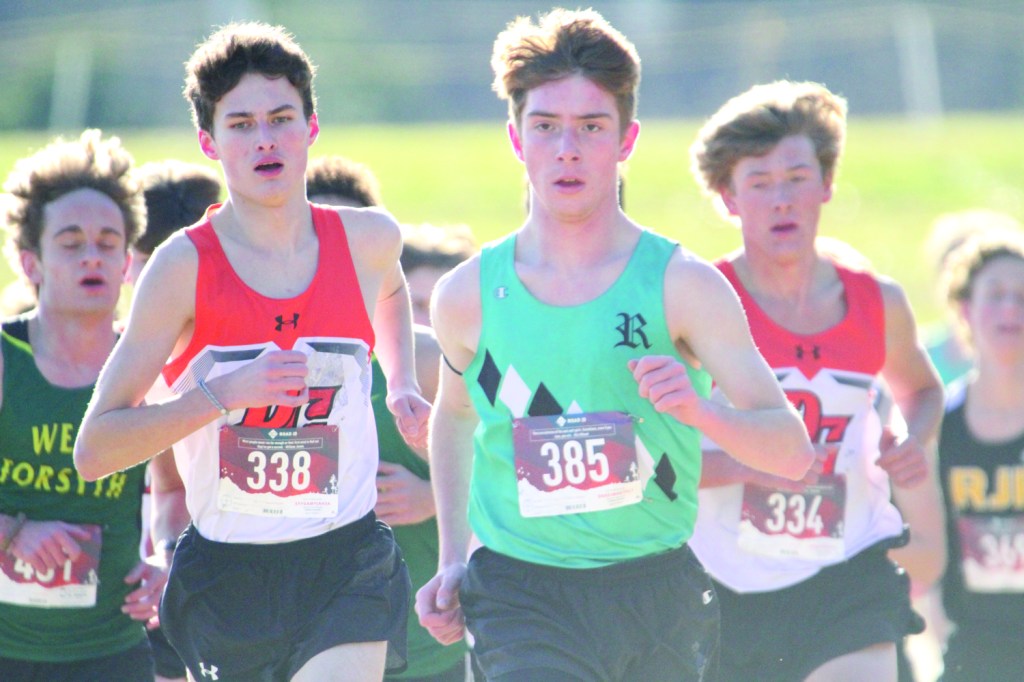 Caleb Young (338) and Andrew Brown (334) run for Davie in the CPC championship meet.

The Davie cross country team wrapped up its season Jan. 16 at the Midwest 4-A Regional at Kernersville’s Ivey Redmond Park.

In a normal year, this race would have taken place the last Saturday of October. But this season has been anything but normal. After enjoying near-perfect weather conditions during the winter season, a wintry mix greeted the athletes as they arrived at the park. Athletes representing the three conferences making up the region were vying for three coveted team and four individuals spots at next week’s state championships.

Davie was represented by junior Caleb Young, who needed to place among the top four individuals not on the three qualifying teams to advance. Young, a two-time all-conference runner who was sixth in the Central Piedmont Conference this season, turned in a strong effort but came up a little short of the needed placing. His time of 17:18 was good for 17th place among 59 finishers. That finish was also eighth among individuals after removing the top three qualifying teams.

The CPC again showed its dominance in the team standings. West Forsyth took home the title with 69 points to narrowly defeat Myers Park (71) and Reagan (76) among the eight competing teams. Reynolds placed fifth with 120 points.

Ethan Long of Page was the overall winner in 16:08 as he sprinted past  Maddon Muhammad of Myers Park to claim victory by a quarter of a second. Page’s Jean-Lou Pare was just a second behind in third place with a time of 16:09.  Muhammad, the son of former Carolina Panthers’ wide receiver Muhsin Muhammad, came in as the pre-race favorite but was unable to hold off the Page senior as the top three finishers ran stride for stride throughout the 5k race.

Team champion West Forsyth was led by a pair of sophomores, Brandt Doty and Wesley Haggstrom, who placed sixth and 10th, respectively. The West team depth was on full display as senior teammates Jeremy Eldredge and Jackson Nichols, who had claimed the top two spots at the CPC Championships, finished 11th and 14th.

Davie was not represented in the girls’ race due to the quirks of the qualifying process. The CPC was again dominant as Reagan (35), Myers Park (42) and West Forsyth (64) punched their tickets to the state meet, while Reynolds missed out after their fourth-place finish among the nine competing teams.

Reagan’s sister act of senior Gwen Parks (19:09) and freshman Bronwyn Parks (19:27) took individual honors. “It is unfortunate we did not get an opportunity to race in the team competition,” said Davie coach Rob Raisbeck. “Our boys and girls  would have probably  each finished in fifth or sixth place.”

Looking ahead, the Davie runners will take a short break before they resume training. “We have told our runners to take a couple of weeks off,” said Raisbeck. “The long season has been pretty exhausting both physically and mentally. We need to recharge our batteries. The spring track season has been delayed and will run from April until late June. The indoor track season was cancelled; the only sport the NCHSAA decided to cancel this year. We will  have our athletes resume running on their own after the two-week break and then start training as a team again on a limited basis in February. We still don’t know what the spring track season will look like from a competition standpoint, but we will worry about that in April.”

As for the fall, the War Eagles are already looking forward to next year’s cross country season. The CPC is likely to go to an eight-team conference with the addition of traditional state title contender Mt. Tabor as well as Parkland. The Midwest Region will likely increase from the current 19 teams to 27.

As for the teams’ prospects, the future is bright for both Davie squads.

“We only lose one varsity senior from each team,” he said. “Nate Brooks has been a four-year varsity runner for the boys and Presley Jones blossomed as a senior leader for the girls. We will really miss them. But everybody else will be back. We were missing a few potential varsity runners this season due to injury and opting out over COVID concerns. If everybody comes back healthy, we expect both teams to make a competitive jump next fall.”