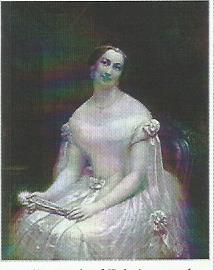 The First Lady story of the John Tyler administration is a bit complicated because there were not one but two First Ladies during the 47 months that Tyler served as President of the United States.

Letitia Christian was born on her family’s plantation in Virginia on Nov. 12, 1790. The education that she received as she grew up in the family of a planter was much like that received by Martha Washington. She was taught how to care for a family, how to manage a household, and how to entertain guests, but she received little education in academic subjects.

Letitia met a young law student, John Tyler, who was quite smitten with her.  According to the book, First Ladies by Beatrice Gormley, “Tyler wrote to beautiful, shy, and religious Letitia and said, ‘Whether I float or sink in the stream of fortune, I shall never cease to love you.’” Tyler and Letitia had a long engagement, and were married on March 25, 1818.

Tyler was a politician, who served as Governor of Virginia for two terms and as both a member of the U.S. House of Representative and of the U.S. Senate.  Mrs. Tyler basically stayed at Sherwood Forest, managed the plantation, and cared for her large family while her husband was involved in his political duties.

She sure had a big family to care for—John and Letitia Tyler had eight children. One child died as a baby and the other seven lived to adulthood. Mrs. Tyler only went to Washington once during the nine years that her husband served in the Senate.

In 1838, Letitia had a paralyzing stroke which left her tied to a invalid’s chair.  She remained in her bedroom reading her Bible and Prayer Book, but she still cared for her family and managed  the plantation.

When William Henry Harrison died unexpectedly after serving as President of the United States for only 31 days, John Tyler, his Vice President, was at his home in Virginia.  Vice President Tyler rushed to Washington either on horseback or in a carriage.  After John Tyler became President, his wife moved to the White House, but she remained in her room just as she had done since her stroke several years earlier. The only time that she was seen at a White House social function was at the wedding of her oldest son, Robert, to Priscilla Cooper.

Letitia had a second stroke and died in the White House in 1842, after holding the title, First Lady, for just 17 months. She was taken back to the plantation in Virginia where she was born for burial. Letitia was a shy, but lovely lady. Her daughter-in-law, Priscilla, is quoted in the book, The First Ladies of the United States of America, by Klapthor and Black, as saying,  “She was the most entirely unselfish person you can image,” and Priscilla also said, “She had everything about her to awaken love.”

Julia Gardiner was born in 1820.  Both of her parents were from wealthy and prominent families. Julia and other members of her family went to Washington for the 1842-1843 social season. Julia was a beautiful young lady with much poise. All of the unattached men in Washington admired the young lady from New York. President Tyler, who was just out of mourning for his first wife, also succumbed to the charm of Miss Gardiner. Letitia was not very interested in John Tyler, who was 30 years older than she was. The Gardiners, President Tyler and other were aboard the USS Princeton cruising on Potomac River when the ship’s captain fired a big gun. For some unknown reason, there was a big explosion. David Gardiner, Julia’s father, was killed. Julia fainted and was carried off of the boat by the President, who was unhurt in the explosion. After Julia’s father’s death, President Tyler comforted her in her grief and won her love. They agreed on a secret engagement. They were married in New York, in 1844—the wedding created quite a sensation, but evidently Julia and the President were happy. By the way, John Tyler was the first President to marry while he was president.

Julia loved being First Lady. The book, The First Ladies of the United States of America, says, “As young Mrs. Tyler said herself, she reigned as first lady for the last eight months of her husband’s term. Wearing white satin or black lace to obey the conventions of mourning, she presided with vivacity and animation at a series of parties. She enjoyed her position immensely, and filled it with grace. For receptions she revived the formality of the Van Buren administration, she welcomed the guests with plumes in her hair, attended by maids of honor dressed in white. She once declared, with truth: ‘nothing appears to delight the president more than…to hear people sing my praises.’”

After leaving the White House, the Tylers returned to their plantation, Sherwood Forest, and seemed to be very happy there. Julia and her husband loved to entertain. They had receptions, dinners, and dances. They had a huge ballroom, the length of a football field, where the dances were held. The Virginia reel was the dance of the day. Mr. Tyler was proud of his young of his young wife‘s social skills.

While living at Sherwood Forest, Julia and John Tyler became the parents of seven children. (That meant that John Tyler was the father of 15 children—the most of any President of the United States.)

Julia became a strong Southern sympathizer while living in Virginia and her husband became involved in the government of the Confederacy. He was a member of the Confederate Congress, which met  in Richmond. While serving there, John Tyler, former President of the United States, had a stroke and died—the date was Jan. 18, 1862—Julia and John had been married 18 years.

After her husband’s death, Julia Tyler moved back to New York, but she was not welcomed by her family because of her Southern sympathies.  She was impoverished because of the depression of 1870. She applied to Congress for a pension but was not granted one until 1880, when Congress voted to give her $1,200 per year.

After President Garfield’s assassination Congress voted to give Mrs. Garfield, Mrs. Lincoln, Mrs. Polk, and Mrs. Tyler each $5,000 per year. That pension allowed Julia Tyler to live fairly comfortably for the rest of her life.  She died in 1889 and was buried by her husband’s side at Hollywood Cemetery in Richmond, Va.

Sherwood Forest, the Tylers’ home at Charles City, Va., is a n interesting place to visit. It is still occupied by President Tyler’s grandson. The house is only open by appointment and an appointment is hard to get. The grounds are open every day and the visitor can at least see the house, which is said to be the longest wooden house in America.