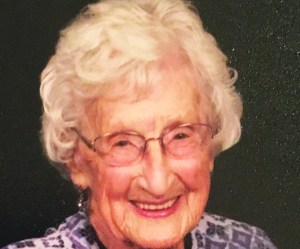 She was born on Oct. 2, 1929 in Putnam County, Indi. to the late Goldie Lawrence and Clovia Pearl Sutherlin Kennedy. She moved from Frankfort, Ind. to Lake Panasoffkee, Fla. in 1993, and then to Mocksville in 2007.  From there, she moved to West Jefferson.  While in Mocksville, she was a member of Blaise Baptist Church, and joined Bald Mountain Baptist in West Jefferson once she moved there. She was a past Matron of Order of the Eastern Star, past president of the Business and Professional Women’s Club, and past president of Zonta International. She attended Indiana Business College and worked as a legal secretary for many years.  She enjoyed puzzles, reading, working in flowers, and had a passion for traveling.

In addition to her parents and step-mother, Mary Kennedy, she was preceded in death by: her husband, Robert Baer in 2014; and siblings, Kenneth Kennedy and Ella Mae Hunter.

A private funeral service will be conducted at Goodwin Funeral Home in Frankfort, Ind.  Entombment will take place in Green Lawn Cemetery.