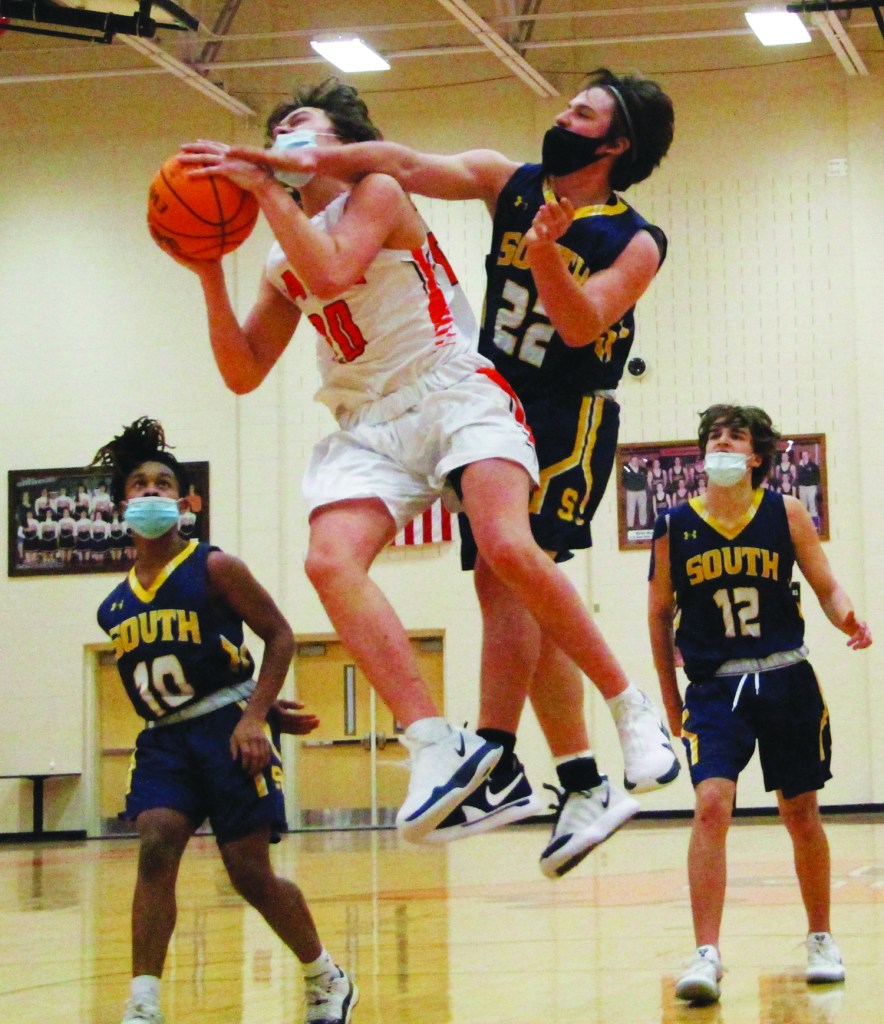 With two new coaches on the sideline, the Davie JV boys basketball team picked up South Iredell and Carson and threw them away like an empty McDonald’s bag.

In the season opener at home on Jan. 7, Davie led South by six at halftime before overwhelming the Vikings in the second half and winning 56-35. The War Eagles absolutely destroyed Carson, 44-23.

In the opener, Burke Rosenbaum’s six points lifted Davie to a 12-7 lead at the end of the first quarter. The margin barely grew in the second quarter, the half ending at 22-16.

“There was one point where they were outhustling us,” said new JV coach Tim Kenney, who is being assisted by Kevin Revels. “They were getting every loose ball and every close rebound. They were just going after it more than we were. Coach Revels challenged them to rebound better, and after that we dominated the glass.”

The War Eagles blew it open with a 17-5 run in the third. Hunter Davis was the main man with nine points in the third. At 39-21, South was cooked.

“We had a lot of energy,” Kenney said. “We moved the ball extremely well. We had one sequence where we had four passes and I bet not one of the passes was more than six feet. It was boom, boom, boom and a layup. They look for each other all the time, which is very nice.”

Davis was far and away the star with 18 points, 14 rebounds, three blocks and three steals. He converted five of six free throws.

“He definitely has potential,” Kenney said.

“You don’t know who’s going to shine at any given moment,” Kenney said. “We have a bunch of kids who are capable of playing the game, and you don’t know where that beam of light is going to come from next. Burke had a really good first quarter. Hunter had a great third quarter. Coleman had a really good fourth quarter. From a coaching standpoint, it’s comforting to know that you’ve got different guys who can step up.”

Davis scored six of 15 points as Davie pitched a shutout in the first quarter. Rosenbaum made a beautiful bounce pass on the break to Lawhon, who made it 17-0. Pilcher hit a reverse layup.  Lawhon got a steal and kicked it ahead to Rosenbaum for an easy two. Rosenbaum and Davis splashed back-to-back 3-pointers. Koontz scored from the low post. Rosenbaum found Pilcher in the corner for a 3. When Koontz scored inside, it was 34-9.

“Anybody who is out there is capable of putting up double figures,” Kenney said.

Davis led again with 11 points and added six rebounds and three steals. “He’s long and he changes a lot of shots,” Kenney said. “He does things that you don’t see in the scorebook.”

“One person who I think is going to help us down the road is Ian,” he said. “He’s very, very aggressive around the hoop. We need to temper that a little because he picked up three fouls today. But he’s strong inside and getting better at finishing. If I had to give a most improved since tryouts started, it would be him.”