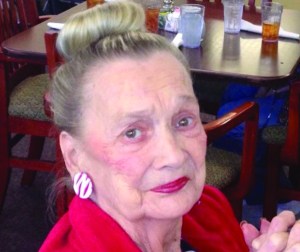 She was born in the Fulton Township of Davie County on April 7, 1930 to the late James Franklin and Annie Elizabeth Brewbaker Burton. She lived in Advance in her early years, where she attended school and played girls basketball. She married Charlie Franklin Cozart on Aug. 2, 1946, after he returned from World War II. While only a teen when she married, their marriage lasted for 57 years until his untimely death.  They lived most of their lives on Mumford Drive in Mocksville.

She was a beacon of light for this community and was known for giving her time and energy to those less fortunate. She was a member of First Baptist Church in Mocksville, where she served for years on committees, visiting the sick, homebound, and those in the hospital. She showed her love by welcoming numerous family members a place to stay at her home. A homemaker for many years, she also worked at Hanes Hosiery in Winston-Salem, Belts Inc., and the seafood restaurant at Lake Hideaway in Mocksville.

After suffering a stroke, she became a resident at Somerset in Mocksville and later a resident of Bermuda Commons in Advance.

She was preceded in death by: her husband, Charlie Franklin Cozart in May 2003; and her daughter, Annie Gelee Cozart, in October 1970.

She came from a large family with six brothers, two half-sisters, four step-sisters, and one step-brother.

A graveside service was to be conducted at noon Wednesday, Jan. 13 in Rose Cemetery with Johnny Marklin officiating. Friends may pay their respects to Mrs. Cozart from noon-5 p.m. Tuesday and 8:30-11 a.m. Wednesday at Eaton Funeral Home. Due to COVID-19 restrictions, the family requests that attendees wear masks and practice social distancing.