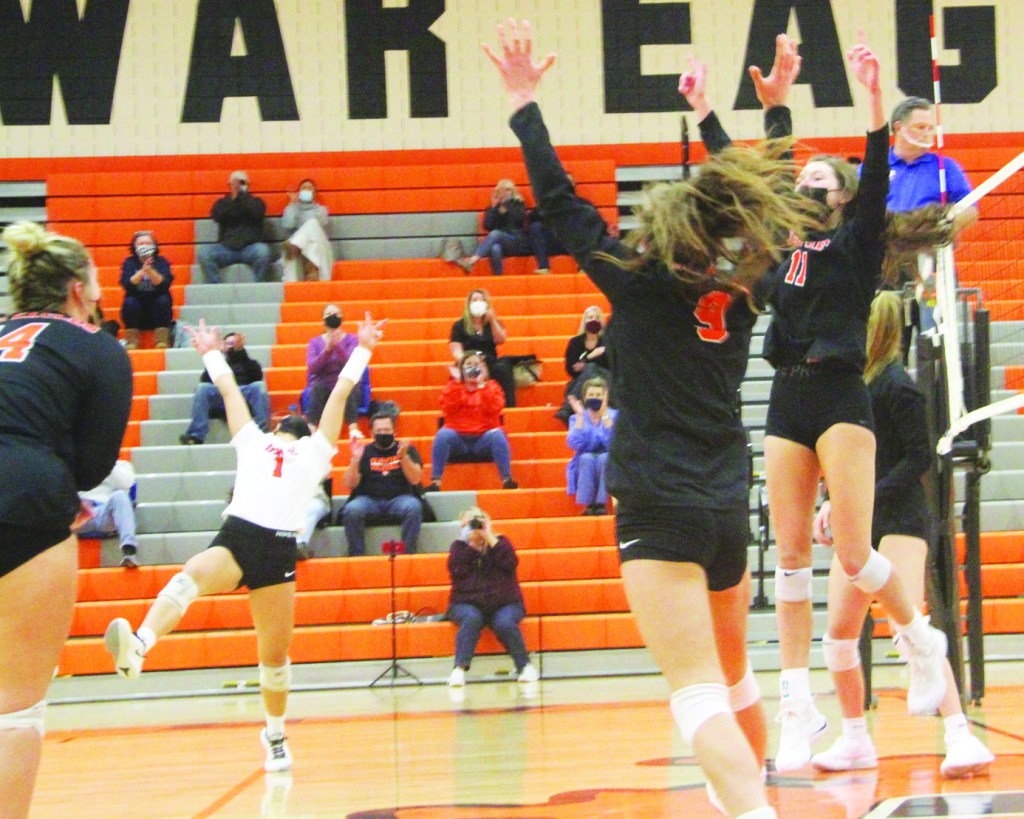 After being idle for 12 days, Davie’s varsity volleyball team returned to action with two nonconference matches in two days.

The War Eagles gathered momentum for the conference tournament and state playoffs by winning both.

They were dealing with a disrupted lineup at Mt. Airy on Dec. 29. Aimee Loj was nursing an injury and Abigail Reynolds was out of town.

“Aimee didn’t practice over Christmas break,” coach Amber Brandon said. “She played the first two sets and we looked like a well-oiled machine. In the third set, she decided she probably needed to come out as she’s trying to ease back slowly. We didn’t want to overdo it before the conference tournament. In the third set, we were playing without two major players. It took us a while to figure out a new normal. But it was good to see the kids play in a completely different lineup and see them figure it out and push through.”

Davie took the fourth set and dropped the Granite Bears’ overall record to 7-4. Senior libero McKenzie Stakely has continuously starred, making outrageous digs and saves, and this day was no different.

“McKenzie has blown me away all year,” she said. “There were two plays where she chased down balls – like a shanked pass – that were not supposed to be gotten. She’s so quick and that’s just something you cannot teach. She can run down balls that nobody else in our conference can run down.”

Junior Molly Bures and sophomore Kiah Mathis did their part.

“Molly’s playing time has gone up, a bigger role,” she said. “She’s a smart player. She did really well. Kiah had a great game, probably the best I’ve seen her play. She was a difference-maker.”

“I didn’t think they had any major hitters, so we focussed on not making hitting errors and giving away points,” Brandon said. “It was another good match for other people to have to step up and score with Abby being out of town.”

“Ali had a really good match,” she said. “She’s playing really well right now. She has stepped into a different role this year, having to serve and help us defensively. That’s something that she’s never had to do. She’s also having to swing on the outside, and that’s challenging for a left-handed kid.

“Emma had a couple good serving runs. Something she brought to the table last year as a freshman was being a great server. She hit a slump at the beginning of this year, but she’s come back the last couple of matches and that’s exciting. She’s our first server and goes behind the line with a lot of confidence. Not only does she hit the ball hard, but it has a lot of movement.”

Recovering from injury, Loj looked like she’s well on her way back to full strength. “Aimee had a really good match,” she said. “She had a couple real good blocks.”

Notes: Davie, which is 9-2 overall, finished second in the Central Piedmont Conference. The standings: Reagan 10-0, Davie 7-2, East Forsyth 4-4, West Forsyth 5-5, Glenn 2-8 and Reynolds 0-9. … The CPC Tournament (Jan. 4-5) was originally going to include the top four teams, but West Forsyth was placed in quarantine, changing the format to three teams. Davie, the tournament host, faced East Forsyth on Monday. The winner took on No. 1 Reagan on Tuesday. … The state playoffs begin next week.