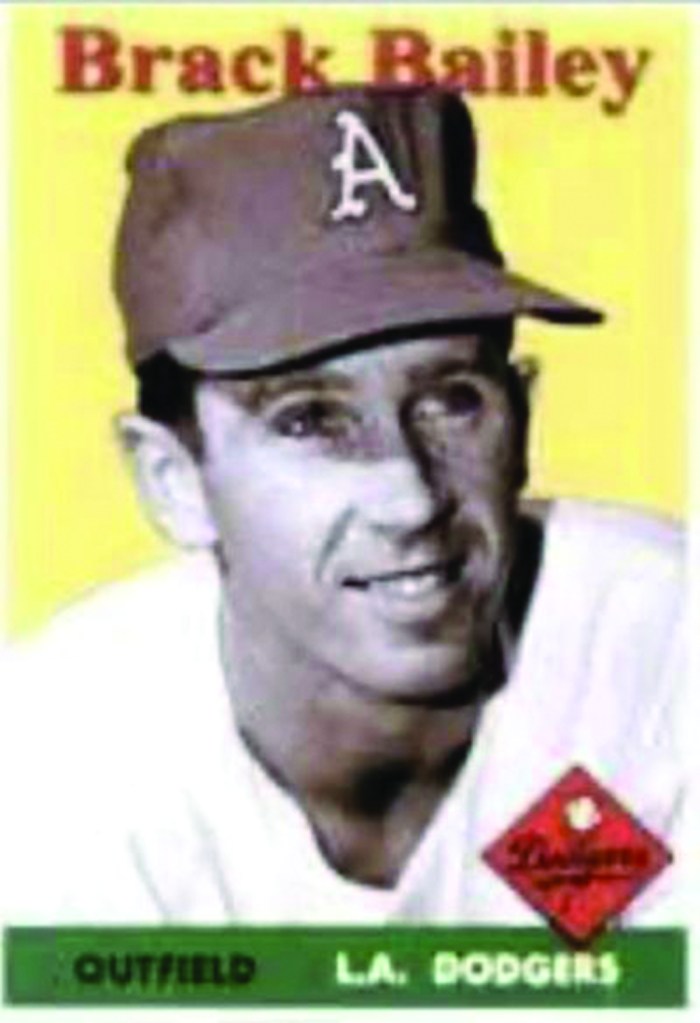 A legendary talent – Braxton Richmond Bailey III of Bermuda Run, known by everyone as “Brack” – passed away on Jan. 2. He was 83.

Growing up in Advance, Brack Bailey was a dominating athlete for the Shady Grove Panthers in basketball as well as baseball, graduating with the last class in 1956, a few months before Davie County Consolidated High School opened. He had a sensational baseball career, evidenced by his induction into three halls of fame. After starring at Pfeiffer College, he played seven years of professional baseball, including three years at the Triple-A level.

He is one of the county’s most compelling athletic stories because he knocked on the Major League Baseball door during a time when the Los Angeles Dodgers had a gold mine of talent and when there were only 20 teams in the big leagues.

“He was a helluva baseball player, and he was a good basketball player,” the late Gray Barnhardt, who graduated from Shady Grove in 1955, said in 2006. “I couldn’t shine because of Brack. But after he got out of baseball, he called me and wanted to play golf. He got ready to hit and I thought he had some type of Polio. I’d never seen such a mess. I said: ‘Brack, I finally found something I can beat you at. You beat me all the way through school, but I can beat you playing golf. Any time you want to play golf, let me know.’”

During the summer of 1956, Bailey accepted a baseball offer from North Carolina. He had every intention of wearing Tar Heel blue. But the late Joe Ferebee – a Mocksville native who built an empire at Pfeiffer, finished with 600-plus college wins and is immortalized in eight halls of fame – stepped in and convinced Bailey to reverse his decision.

Bailey was The Man at Pfeiffer, hitting .469 as a junior and .424 as a senior. The outfielder was named to the NAIA All-District and All-State teams in 1959 and 1960. Both years he paced the Carolinas Conference in home runs and RBIs. He was also president of the student body.

Los Angeles signed Bailey after his senior year, and he spent six of seven pro years in the Dodgers organization. The exception was 1963 with the Reds. Though he fell inches short of reaching the promised land, he enjoyed all kinds of special moments and crossed paths with countless guys who made it to The Show.

Bailey’s basement is a baseball shrine – pictures everywhere of baseball celebrities, boxes of memorabilia and lots of scrapbooks.

“From the time I was knee-high, I dreamed of being a major league ballplayer,” he said. “As I got higher and higher and to Triple A, I still had that dream. If you had superior abilities, you’d get there. But I had mediocre abilities, and a lot of other things fall into it. The breaks, who’s ahead of you, the organization, who signed you, all the politics. Retrospectively, the closer I got the less compelling that dream was. In Triple A, it became more of a job. I had a family. I’d have to relocate basically to the West Coast in Spokane, Wa., or Albuquerque, (N.M.). I probably didn’t have the physical ability. I didn’t have the size (at 5-11, 170).”

His second pro season (1961), in particular, was staggering. After getting beaned in the head and spending 18 days in the hospital, he bounced back in breathtaking fashion, earning the Topps Minor League Player of the Month award in consecutive months (July/August). Playing for Panama City, he finished atop the Alabama-Florida League in hitting and took home Topps Minor League Player of the Year. He owned the No. 2 average (.369) in all of the minors. To put that into perspective, look who the first and third bats were: Tony Oliva, an eight-time all-star in the majors, and Lou Brock, who stole 938 bases in a hall-of-fame career. In 101 games, Bailey had 34 doubles, 11 triples and 14 homers.

Bailey flirted with the majors in 1963, making the Cincinnati Reds’ spring training roster. He appeared in a major league game that spring, getting thrown out at home, before dropping to Triple-A San Diego.

Bailey got injured running into the wall and the Reds traded him back to the Dodgers. He had an incredible season in 1964, hitting .321 with 28 doubles, 17 triples, 19 homers, 100 RBIs and a league-leading 174 hits for Double-A Albuquerque. Future hall of famer Joe Morgan’s average (.323) was a tad higher, but Bailey won Topps Player of the Year for the second time.

Although he never caught a break with the Dodgers, his accomplishments were formidable right down to the end in 1966.

“He was the best hitter that’s ever come up,” said Barnhardt, who was a Shady Grove pitcher and an American Legion teammate for three years. “He wasn’t only a good baseball player, he was a good guy, too. He wasn’t a hothead. He was the same when you saw him playing baseball as he was when you were with him in high school. Everybody looked up to Brack. He had it all. He was not only a good hitter, he was a good infielder and outfielder. Wherever he was at, he was the best.”

Bailey played on the same field with lots of big names. He played on the Dodgers’ winter team with Ed Roebuck (major league pitcher from 1955-66), Larry Burright (pitcher from 1962-64) and Jim Brewer (pitcher from 1960-76). Two teammates on the 1965 Spokane team that captured the Texas League title by 17 games were Don Sutton, a hall of famer who pitched from 1966-88, and Jack Billingham, a pitcher from 1968-80 who was the ace for Cincinnati’s Big Red Machine. Five more 1965 teammates went on to play for the Dodgers’ parent club: Jim Barbieri, Lou Johnson, John Werhas, Bart Shirley and Thad Tillotson.

“Pete was with the Macon Peaches and I was with the Greenville (S.C.) Spinners,” he said. “Tommy Helms (a major leaguer from 1964-77) and Oliva were on that all-star team.”

There was the time he inadvertently sold a cap that belonged to a man named Duke Snider, Bailey’s manager in Spokane.

“I think I was the only one on that team that didn’t make it (to the majors),” he said.

Here’s even more Bailey feats that jump off the page. He played in three all-star games (1961, 1962 and 1964), he batted .302 for his career and he hit a spring-training homer off Don Drysdale, a hall of famer who won 209 games for the Los Angeles Dodgers. Bailey recalled that moment.

Of all Bailey’s performances, nothing compares to the 1964 game for Albuquerque when he launched three homers – on three pitches – off Pat Jarvis. Think about that. Three homers on three pitches against a guy who pitched for the Atlanta Braves from 1966-72.

“That was something big then,” Barnhardt said of Bailey’s career. “It’s big now, but that was one of the biggest things around (Davie County) at the time. Golf hadn’t taken hold yet, and we didn’t even have a football team. Baseball was about it. We all kept up with him.”

The scrappy Bailey chased his dream by playing the only way he knew, and that was all-out on every play. He came through time and again for the Dodgers’ farm clubs. He had all the skills needed to go all the way.

“I started playing third base in Double A and Triple A because of what the Dodgers had ahead of me in the outfield – Tommy Davis, Willie Davis, Ron Fairly and Lou Johnson,” he said.

“I’ve been following the Dodgers since 1950, and they had about a half-dozen hall of famers on that team,” H.T. Meroney, a 1958 Davie grad, said in 2006. “Brack should have been with somebody like Pittsburgh. They weren’t worth a damn back then.”

Despite Los Angeles’ vast array of talent, Bailey had everything going for him early in the 1965 season. Former Brooklyn Dodgers great Pete Reiser was his Triple A manager at Spokane, Reiser saw the spark in Bailey’s game and Bailey bolted out of the blocks, leading the Pacific Coast League in hitting after the first two weeks.

“I was his type of ballplayer – which is not great ability, but I would crash into a wall and do whatever was necessary,” Bailey said. “Pete said: ‘Have a year for me like you had last year and you’ll be in the big leagues with some organization, probably the Cubs.”

Ferebee said: “Pete couldn’t believe the Dodgers didn’t have him on the bench with their parent club. If the ball stayed in the park, Reiser would catch it. They had to scrape him off the fence five or six times, and that’s before padded walls. Brack was that same type outfielder and Pete Reiser saw it. He never questioned anything. You’d like to have all nine like him.”

But just when everything was pointing in the right direction, Reiser suffered a heart attack and had to give up managing.

“Snider was named the manager,” Bailey said. “The Dodgers were my favorite team, Duke Snider was my idol and I really choked playing for that type of guy. And he was not a good manager. I saw him the next year when I was in Triple A and he was in B-ball and he said: ‘Now I know how bad I was last year.’”

Ferebee: “They changed managers and Brack didn’t have the ties he had with Reiser.”

The 1966 season was Bailey’s last. As fate would have it, the Dodgers’ powerhouse collapsed the year after Bailey’s retirement, going 73-89 in 1967. Two years after that, the majors expanded to 22 teams, adding the Montreal Expos and San Diego Padres.

“My last year me and Billingham drove from Spokane to my house in Winston-Salem,” Bailey said. “I said: ‘Jack, if I can get a job with some promise, I’m not going back to baseball.’ I had my college degree; he did not. He said: ‘Well, I’m going to give it one more try.’ They expanded, he got picked by Montreal, he was traded to Houston and he and Joe Morgan went to Cincinnati in another trade. They expanded right when I got out of baseball.”

Ferebee said there’s no telling what Bailey might have achieved had he played for another franchise.

“The Red Sox and Twins tried to buy him from the Dodgers because they had a place for him to play,” Ferebee said. “The Dodgers wanted to keep him because they figured on using him the next year. Brack was a better hitter than anybody they had on the bench. The Dodgers’ pinch-hitter was not a position player; it was Don Drysdale, the great pitcher, and he couldn’t hit like Brack Bailey. He could play anywhere. He would have been ideal for the Dodgers to have on that team – if nothing else, as a pinch-hitter. Lou Johnson wasn’t the ballplayer Brack Bailey was, but he played for the Dodgers. No doubt he should have played some big league ball, and he would have if the Dodgers would have turned him loose.”

Barnhardt wondered what would have happened if Bailey’s patience hadn’t worn out.

Henry Shutt and Bailey played ball together all the time until Shutt moved from Advance to Mocksville in the fourth grade.

“He basically led everywhere he played,” Shutt said. “He was everything that anybody would have wanted.”