Williams one of best at shot put, discus throw 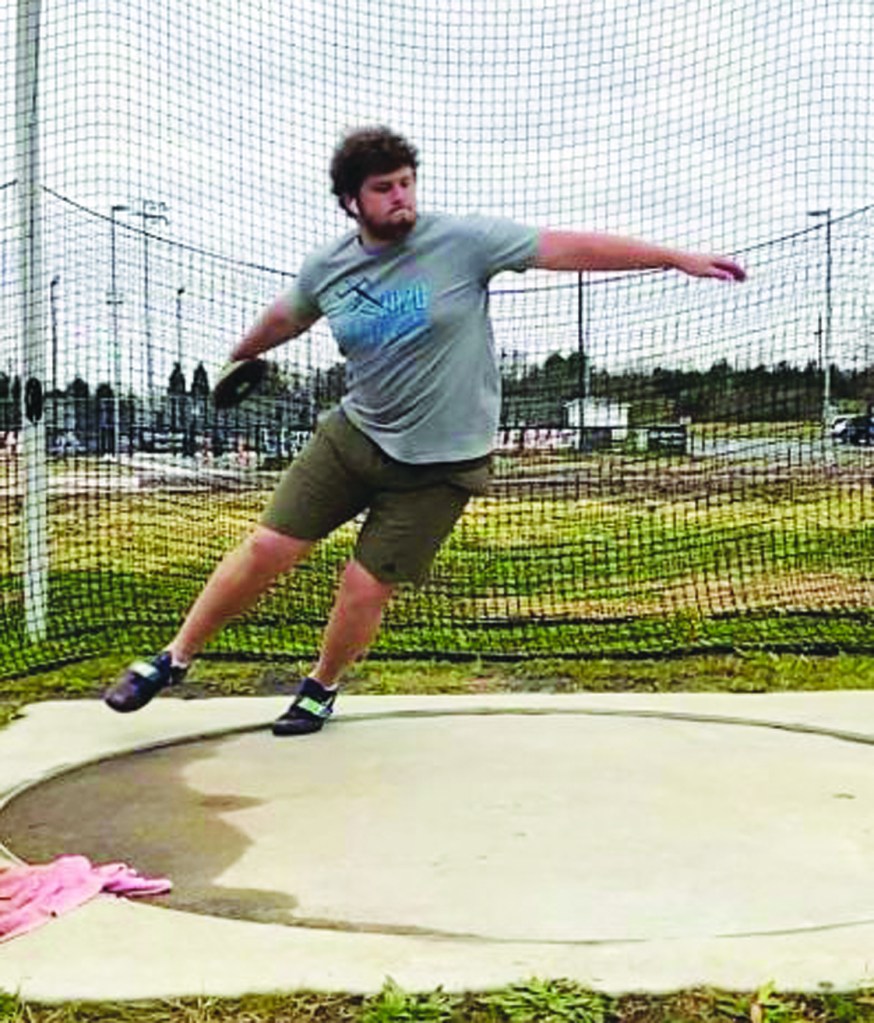 Junior Spencer Williams looks destined to be one of the finest discus/shot put athletes in Davie annals.

Let’s look back at this freshman track & field season. In the Central Piedmont Conference, he finished fourth in the discus at 136-4, a personal record at the time. In the regional, he was seventh in the discus (133-11) and 14th in the shot put (37 feet).

His sophomore season last spring, of course, was wiped out by COVID-19.

“My freshman year I started out really strong (in the shot put) with a 42-footer, and then from there I declined,” Williams said modestly. “I think I started to focus too much on discus and it threw my form out of whack and my throws went way down. But I’ve figured out both of the events better. Obviously, there’s still a lot I need to work on, but I’ve started focussing a lot more on shot put and that’s really bumped up my distance.”

Williams is a 6-5, 293-pound hoss who will help anchor the Davie offensive line at right tackle come February. But as good as he is in football, track & field is his No. 1 passion.

Meets have been few and far between during the pandemic, but Williams found one on Dec. 12 in the AAU Fall Series. It was held at Mountain Island Charter in Mt. Holly.

Williams, though, did not think the showing was anything special. He said this is only the beginning.

“Usually my first meet I’m not going to perform as well as I do normally because you get up there and get the jitters and get nervous because it’s your first meet,” he said. “But in practice I’ve been throwing about 185 in discus and about 59 in shot put. Those are my practice PRs. For the first meet, I was satisfied with it – but just for the first meet. I’ve got two more meets coming up in January that I’m looking for bigger throws at.”

Less than two years ago, Williams was throwing the discus in the 130s and the shot in the 30s/40s. Now he’s in the 180s and flirting with 60, respecitvely. That’s astonishing growth.

“Spencer fell in love with the sport as a freshman working with coach (Leonard) May and decided he was going to do whatever it takes to become a champion thrower,” Davie coach Rob Raisbeck said. “He has worked year-round on his technique and worked in the weight room to get stronger. Now he is at the point where he will be competing for the state championship in both events. Through hard work and determination, he has become one of the top throwers for his age in the U.S.”

Williams said: “It’s pretty crazy to think about it. That 175 is just the start for my season. My goal for the outdoor season is to break the (discus) state record, which is 213-9.” With a laugh, he added: “That’s ambition.”

Come April, when the reconfigured track season will begin, Williams wants to officially take down the school records in both events. He said the shot put record is around 53 feet and the discus record is 165. He should have little trouble with both.

“Technically, at this meet (in Mt. Holly), I was competing as an unattached athlete, so I don’t know if it’ll count for an official record for Davie until we actually start our track season,” he said. “But when we get to that point, I should break the records.”

College coaches have taken note. He has received interest from 17 Division-I schools. Stanford, N.C. State, Virginia and North Carolina are among the schools recruiting him.

“It’s been really cool,” he said. “When I first started throwing, I didn’t expect any of this. So it’s all been a huge blessing for me. In track, a lot of schools are operating on limited funds right now. It’ll probably be later this spring into summer when I start getting offers.