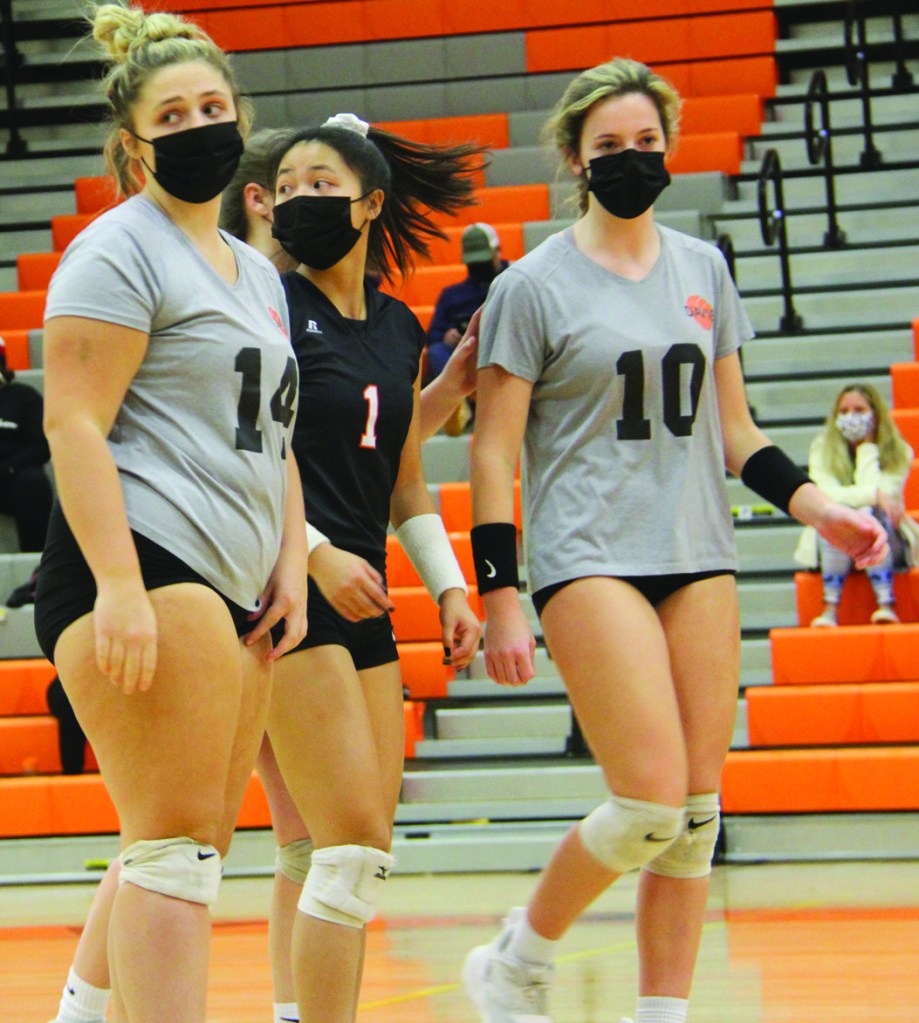 After dropping the first two sets by a combined six points, the Davie varsity volleyball team dug in its heels and said: “If we’re going down, we’re going down swinging.”

The third set against visiting Reagan on Dec. 17 was like a football or basketball game that goes four overtimes, like a baseball game that goes 14 innings. It was a marathon. Davie fell just short, 34-32. The scores of the first two sets were 25-21, 25-23.

“I’ve never been involved in a high school game that went that high,” coach Amber Brandon said of the third set.

Davie played its heart out. Reagan was just a little better. The Raiders are 10-0 overall for a reason. They’re 9-0 in the Central Piedmont Conference, clinching their 12th conference championship in 14 years. (The exceptions came in 2009 and 2019.) They’ve captured 30 of 34 sets for a reason.

The CPC runner-up War Eagles, who have sailed past everyone else, fell to 7-2. They can take solace in finishing in the top two for the fourth straight year.

A win would have potentially resulted in a share of the title for the War Eagles. But instead of dwelling on the 3-0 loss, Brandon counted the number of things her team did right while only getting outscored 84-76 over three sets.

“We have made some defensive adjustments that I thought worked really well,” Brandon said. “This team is really solid in first contact and defense. We’ve struggled to find the floor some, and when you’re playing a team like Reagan that has their own really good defense, that makes it more difficult if your team struggles offensively.

The third set was an absolute slugfest.

“We made some really good decisions,” she said. “Extra points doesn’t allow for extra subs. We ran out of subs, so we played the last 15 points in a crazy rotation. We had kids playing out of position on the front row, and we had kids that had to play on the back row that normally don’t. We did miss a couple defensive assignments there. Some balls hit the floor on our side that hadn’t hit the floor all night.”

The biggest difference between the teams: Reagan’s size.

“They had about 10 more blocks than we did, and that right there is the difference in the score,” she said. “Other than that, it’s probably two of the closer matched teams I’ve ever seen in the CPC.”

“Aimee has never played six rotations,” Brandon said. “She’s never had to serve-receive. She’s never swung on a pin. She’s having to do all those things this year. Aimee is six or eight weeks into this new role, and in a normal year we would be starting tryouts. Things are finally starting to click. This was the best match she’s had by far. She had a couple swings that I’m still not sure how they came up with them. She had a couple big blocks.

“Kiah had a huge night. She’s had a breakout year in the middle.

“We made a lineup change in the second set, just to see if we could get something going. Molly has been playing really well in practice for the last week and a half. I told her I’m going to try you in the lineup; I want you to be confident. I know she hit about .500. She had a great night. She made some smart decisions.”

Williams one of best at shot put, discus throw