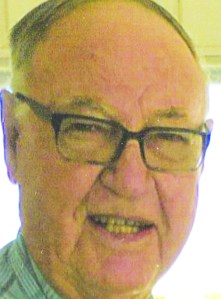 He was a loving husband, father, grandfather, great-grandfather, “Uncle Butch” and friend to many. He was born on Aug. 11, 1933 in Davie County to the late Wiley and Jewel Beeding. He was a lifelong resident of the Smith Grove community and member of Smith Grove United Methodist Church.

He served in the U.S. Army from 1953-1955. In 1953, he married Bonnie Rose Nance and they soon built a home. In 1980, the couple built a mountain cabin in Alleghany County, where they enjoyed many weekends, hosted mfall chicken stews and made lasting friendships. For many years they gardened, listened to bluegrass music and spent Sunday afternoons visiting with friends. For about 40 years, he worked in the lumber yard at Mocksville Builders Supply. After retirement, he and a business partner purchased, remodeled and sold homes in and around Mocksville for another 20 years. He was a house “flipper” before it became popular. A craftsman, he spent lots of time in his shop tinkering and building small furniture for family.

He had a big heart and never met a stranger. He treasured sitting on the porch reminiscing with family, friends and neighbors. He looked forward to going out to breakfast with family and friends. He was always there to lend a hand; delivering food to families in need, helping build wheelchair ramps, gathering building supplies for storm victims and so much more.

He was also preceded in death by his brothers, Jim and Richard.

A graveside service with military honors will be conducted at 1 p.m., Tuesday, Dec. 22 at Smith Grove United Methodist Church Cemetery conducted by the Rev. Al Thomas of Wake Forest, a longtime, special friend of the Beeding family. Attendees are asked to wear masks and practice social distancing. Friends may pay their respects to Mr. Beeding at Eaton Funeral Home on Monday, Dec. 21 from noon-6 p.m.