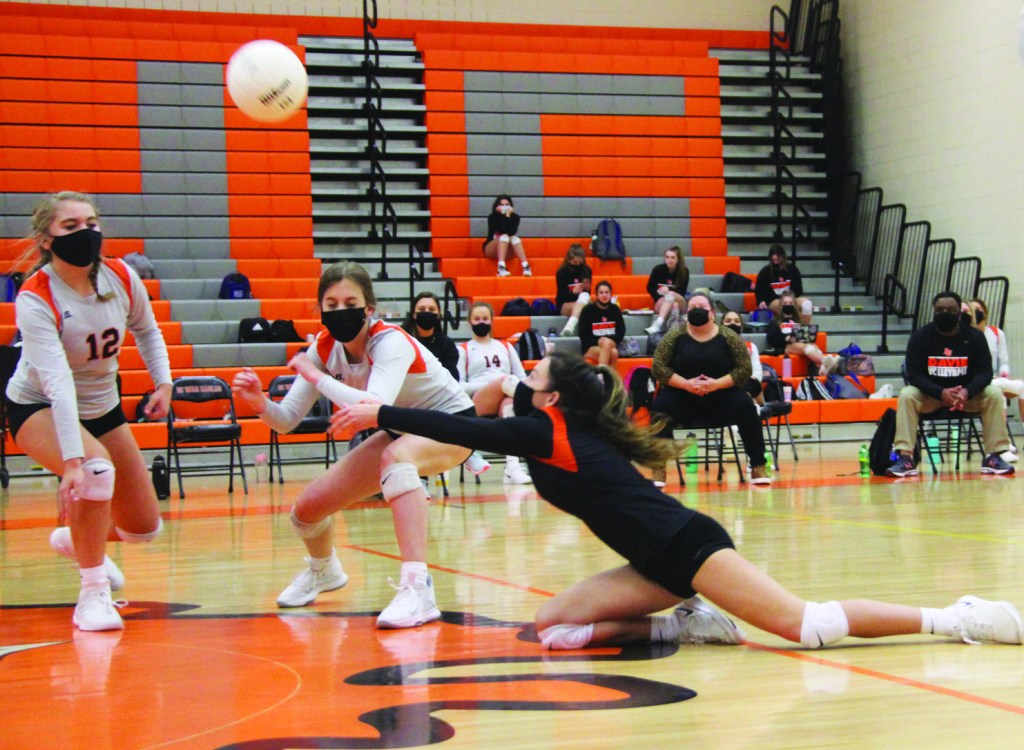 Libero Taylor Smith reaches with Caroline Lakey (12) and Lauren O’Connor there for help.

In what has become a blissful broken record, the Davie JV volleyball team continued to show a very bright future last week.

“The JV kids are getting better every single day,” varsity coach Amber Brandon said after Davie dispatched West Forsyth and Glenn. “With the summer and fall being very different from what summer and fall normally look like, the freshmen are more freshmen than they ever have been. So to have a JV team that’s 10 freshmen in a year where summer workouts were virtually nonexistent and they’re still undefeated, that shows how much potential they have. Their potential is absolutely insane.”

The match at West Forsyth on Dec. 8 came with some anxiety. Hailey Johnson has been a rock at libero all season, but she was sick and unable to make the trip. Freshman Taylor Smith’s emergence in the libero role underscored Davie’s depth in 25-22, 25-16 victory in the first and only meeting against the Titans.

“I was a little nervous when I got the text message that Hailey was going home,” Brandon said. “Taylor stepped in, played libero and did a great job.”

Gracie Wilson did her usual bit.

“She is starting to turn the corner in the leadership role,” Brandon said. “She was one of the strongest leaders on the JV last year, and we knew pulling her up to varsity would leave a leadership hole on JV. Every day Gracie steps in and fills that role a little bit more.”

The size that Camden Hurst, Mikaylah Hutton, Sophia Brady and Wilson offer is what especially excites Brandon when she looks at the varsity future.