Cana/Pino: Nora Latham’s smiles and hugs will be missed 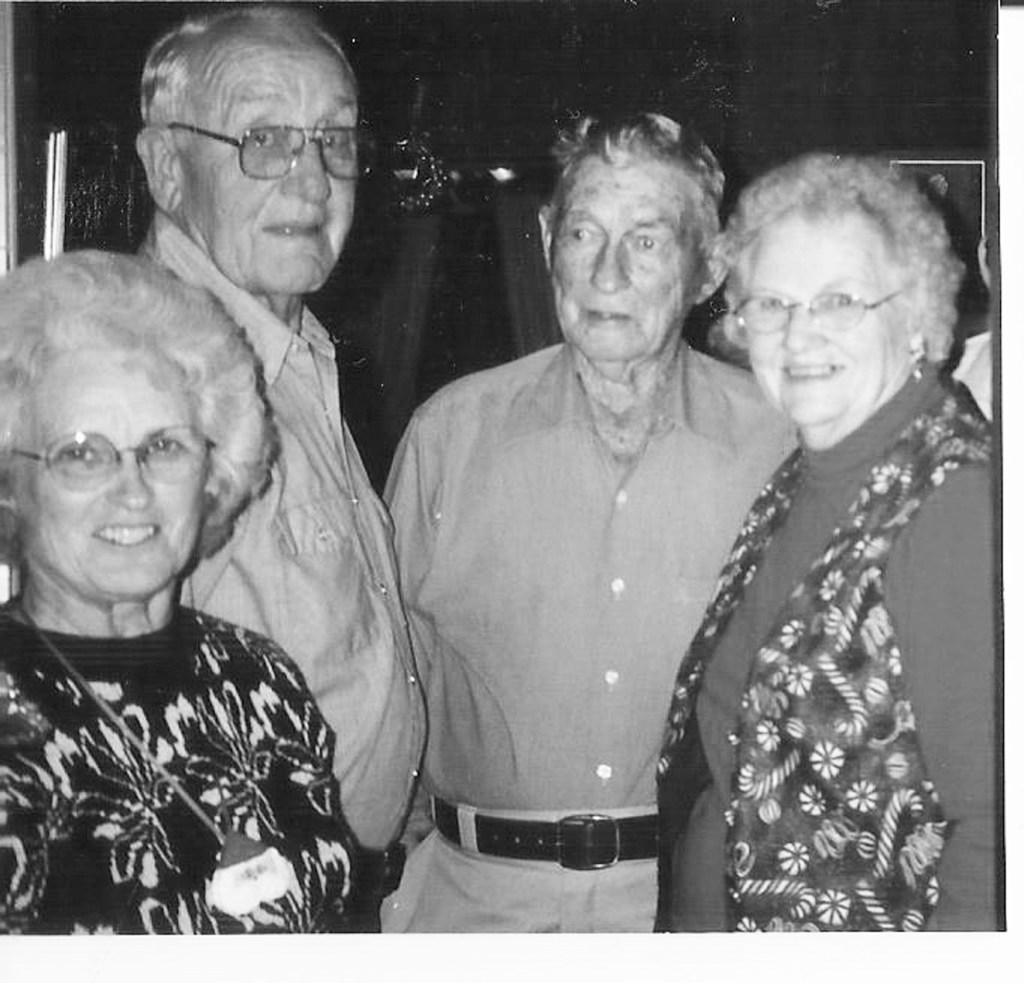 Sara and Mac Eure and Harmon and Nora Latham at a Christmas party for the Wesley Chapel Fellowship Class at Frostland several years ago.

I am interrupting the series of articles concerning the First Ladies of the United States to pay tribute to a special lady of the Pino/Wesley Chapel United Methodist Church/Cana Road community.

That 96-year-old lady is Nora Mae Cline Latham who passed away on Dec. 9 at Davie Rehab and Nursing Center. Nora was committed to helping her church and community as long as her health permitted—that being into her 90s. She attended Wesley Chapel services with her daughter long after she turned 90.

Nora was a sweet lady who always had a smile and a hug for those she met. I sat on the back  pew of the church, and I always knew when Nora had arrived because suddenly someone would come from behind and give me a hug. It was a joy to be around Nora.

Nora Cline Latham was a hard worker, and I do mean hard. Our church is a small church with only 25 or so active members. Those members decided to build a fellowship hall which was going to cost more than $3,000.  That meant a lot of money had to be raised. Nora Latham played a pivotal part in raising that money.

The Wesley Chapel Women made and sold chicken pies – hundreds, maybe thousands – of chicken pies. Nora Latham, Kathy Latham Ellis, and Janice James made the crusts for all of those pies. Nora, with the help of her husband, Harmon, cooked big pots of chicken, removed the meat from the bones at home, as did other Wesley women, and brought the chicken and the broth to the church kitchen all before the pie-making process at the church kitchen even began. Nora not only helped make the crust, but she made sure all ingredients put in that crust were just right. (The ladies would not let me in the kitchen).  They brought the pies to another room, and I crimped the top crust and the bottom crust together; thus I got the name the “Crimper.” It is easy to see who did the hard work in the pie-making process and who was just an afterthought.

Our Nora probably made enough pies to reach half way around the globe. If she did not make enough chicken pies, then she made enough chocolate pies to complete the half circle.  She made those pies for all of the church dinners. At those dinners, people would go to the dessert table first so they would be sure to get a piece of Nora’s chocolate pie. This same lady made the biscuits for the country ham breakfasts that were served at Wesley Chapel for many years.

Nora not only cooked but helped with a quilt the Methodist Women made and sold. That lady could do most anything and would do most anything to help a good cause. Among other organizations that she helped in addition to her church were: the Cub Scouts, the United Way, the Relay of Life, and the Storehouse for Jesus. I don’t need to plead this case anymore for you to understand that Nora Latham was a hard worker who did her part and more on many worthwhile projects.

Nora lived on Cana Road for many years and was a good neighbor. She always had time to help anyone who needed help. The people in this area and others will always miss and remember Nora Mae Cline Latham.

In addition to her parents, Marvin and Dottie Rupard Cline, Nora was preceded in death by her husband, Harmon, to whom she was, married for more than 60 years; her son, Steve, who died when he was a young man; her sister, Patsy Cline; and her brother, Sandy Cline, who died recently.

Nora is survived by three children and their spouses: Kathy and Bob Ellis, James and Chinera Latham, and Dale and Joyce Latham; five grandchildren; and nine great-grandchildren.  She is also survived by two siblings, Peggy Cline Angell and Flake Cline.

Nora was buried on Saturday, Dec. 12 at the Wesley Chapel Cemetery.  People don’t have to have a brick and mortar building to remember Nora Cline Latham’s love for her church and its people as well as for the hundreds of people she met and knew when she worked at Central Carolina Bank or when she was involved in bluegrass get-togethers, etc.

After the Covid-19 crises is over, you too can honor Nora’s memory by remembering to smile and by giving a hug to a person who needs it – just as Nora always did.

Our area has lost a valuable member, but our love and appreciation for the Nora Cline Latham, who sat in a pew on the second or third row at Wesley Chapel, will live on.

If you want to remember Nora in a more tangible way, her family requested that in lieu of flowers that gifts be made to The Wesley Chapel Memorial Fund, C/O Kathy Ellis, Treasurer, 2108 Cana Road, Mocksville.

When Nora died, I began to do what old people tend to do.  I began to reminisce about the Fellowship Sunday School Class in which Nora and Harmon were members as were my husband, Roland, and I.  Those memories were sad because Vernon and Margaret Dull, Gene and Marie Miller, Bob and Louise Dill, Vestal and Coleen Dull, Gene and DeWilla Smith, Clyde and Virginia Murray, John Gaither Ward, Roscoe Leftwich, Inez McClannon, Johnsie Shelton,  Sara and Mac Eure and now Nora and Harmon Latham  are all dead. Three other couples, Nita and Norm Bullard, Von and Madelyn Shelton, and Frank and Toby Hawkins moved away.  Norm, Von and Frank, who actually died before his wife moved, are all dead. After being depressed by all those losses, I began to remember all the good times that group had worshiping and socializing together—those memories made me feel better.

I urge you to search you memory, record pleasant memories, and see if that doesn’t help you survive difficult times.

The members of Wesley Chapel United Methodist Church invite you to join them for worship each Sunday at 10 a.m.  Services are held in the sanctuary with worshipers wearing masks and practicing social distancing.  The service is broadcast on the radio.  There are people who worship inside the church and some who continue to feel more comfortable worshipping in their car. They invite you to join them in whatever venue that you feel most comfortable.

Harpist to be at Center Methodist on Sunday