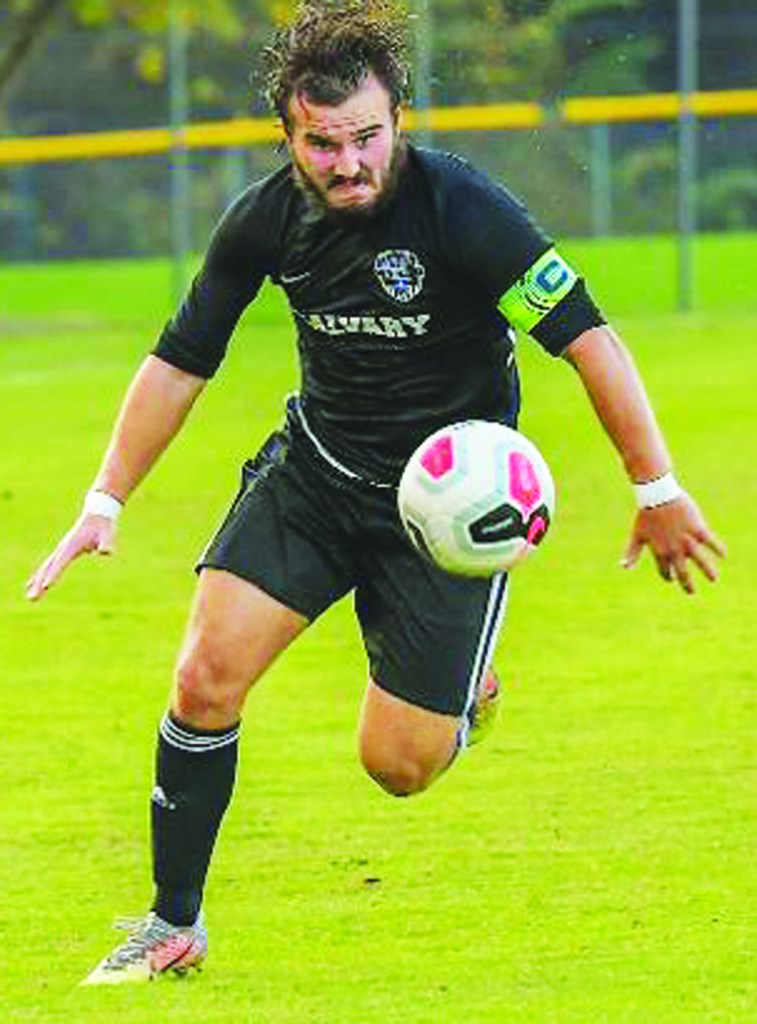 To say senior Josiah Winters had a big soccer career at Calvary Day is to understate by a bunch. He wasn’t just a good player, wasn’t just a great player, he is an all-timer for Calvary.

And the Cougars? They had the kind of season teams dream about. They captured the NCISAA 3A state championship to complete a perfect season (14-0).

They obliterated the competition by an aggregate score of 75-8, and the architect on the field was Davie County’s Winters, the team captain. He scored at least one goal in 13 of 14 games and finished with the program record for career goals.

“He’s a very, very good player and most likely will go Division-I – easily Division II or Division III,” eighth-year Calvary coach Ben Kerth said. “COVID has slowed down the process, but I’ve had multiple coaches calling about him.”

For the season, Winters was far and away the top scorer with 27 goals. He was the team’s No. 2 man in assists with 15.

In fact, his career was extraordinary. As a freshman, he was the team’s most valuable player. He was a four-time all-conference player and four-time all-state selection. He made all-region as a junior/senior. He was the conference player of the year as a senior. He has been nominated for all-American honors and will find out soon if he made that list. He was a starter for Kerth way back in 2016 as an eighth grader.

“He has a nose for the goal,” Kerth said. “From eighth grade through his junior year, he was specifically a goal-scorer. Teams started to double-team him and teams started to man mark him, so this year he brought getting the ball off his foot quicker into his repertoire because we had so much talent on the team.”

The Cougars have been powerful for a while. They reached the state quarterfinals in 2017 and 2018. Last year they climbed to the semifinals. This year they claimed the conference championship for the fourth year running.

In his senior year, Winters played with the determination of a man paying off a debt.

“All the coaches recognized that his attitude this year was: I’m going to do anything to win – instead of, hey, I need to do everything for my team to be successful,” Kerth said. “This year he took on the role of I’m going to do anything it takes. He’s always been coachable with me, I’ve just had to ask him to do so much during his freshman, sophomore and junior years.”

Winters’ assists climbed in 2020 because of the titanic lineup that Kerth was able to put around his star.

“This year we had so much talent on our team that everything came together and Josiah was willing to share that,” he said. “In doing so, he still got his goals, but his assists jumped up tremendously, too.”

In the first round of the playoffs, the Cougars whipped Asheville School 5-1. They knocked off Coastal Christian, 2-1, in the semifinals.

The final matched Calvary against another vaunted contender, Concord Academy.  The Eagles were riding a six-game winning streak in which they hammered opponents 33-2.

“They basically brought a whole club team, so they were very talented,” Kerth said.

The Cougars struck in the first half. Winters set it up with a free kick. The result was a goal and Winters’ 15th assist. That was the only goal of the game. Calvary held on 1-0 and celebrated the program’s first ever state title.

What a night. What a moment for Winters and Co. They averaged over five goals per game; opponents averaged less than one.

“We hit the post twice, so it easily could have been a 3-0 game,” Kerth said of the championship game. “Josiah hit the post once on a one-on-one. That was the only game he didn’t score in this season.”

Winters walked off with 117 career goals.