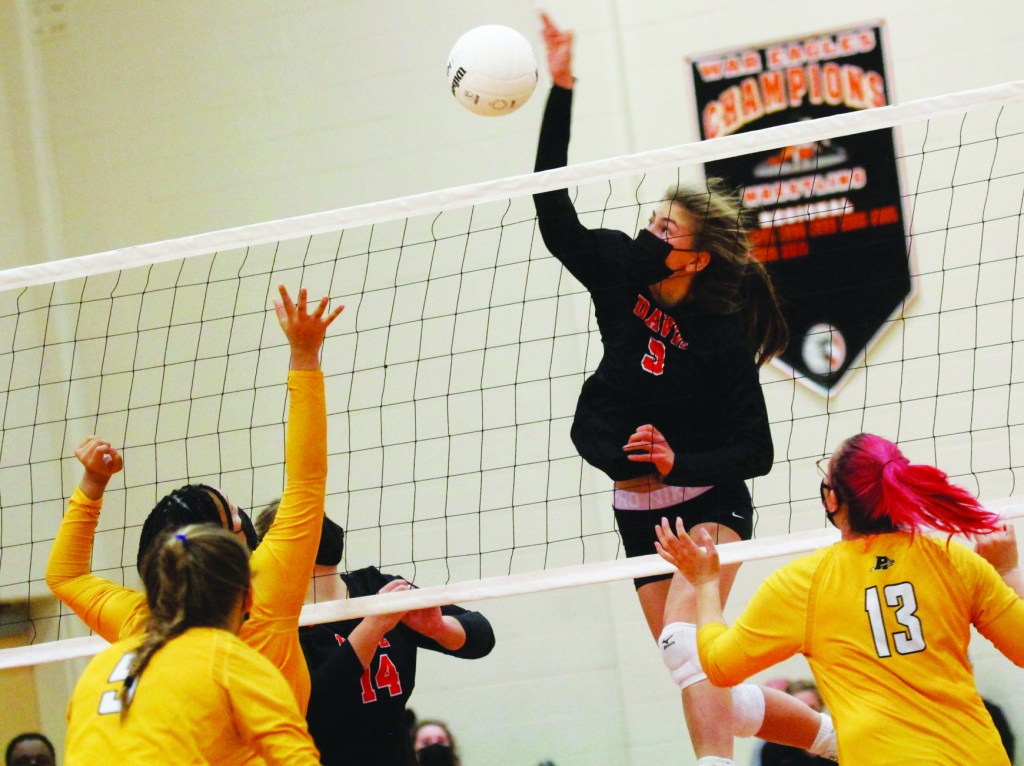 Sidnee Everhardt goes for the slam.

There was a great moment waiting to be written about after the first three sets at Reagan on Dec. 1. It was going to be a doozy.

After three sets were in the books, the War Eagles were ahead 2-1. They were overcoming the injury loss of senior setter Elizabeth Tilley and were heading toward sole possession of first place in the Central Piedmont Conference.

But the match ended with a Davie whimper, not a bang. Reagan stormed back to win 3-2.

“Reagan is definitely scrappy and the best defensive team we’ve played,” coach Amber Brandon said. “Balls that we’ve seen go to the floor all year did not go to the floor.”

“We came out on fire (in the second set),” Brandon said. “Reagan has a young team. They play two freshmen and two sophomores in the starting lineup, and they were making young mistakes. And our kids did a great job of taking advantage of it.”

There was an unbelievable comeback in the third set. After digging an 18-9 hole and watching Tilley have to leave the court for good, Davie somehow found the resourcefulness to score 18 of the next 25 points to win 27-25.

“(Tilley’s injury) definitely hurt us,” Brandon said. “We run a 6-2 offense, so she’s the senior leader of the two-setter system. It took us a while to come back from that and get ourselves readjusted. Peyton Justice had a good run at the service line. I ran out of subs (the limit is 18 per set) and had kids playing out of position. It was wild.”

“We just could never get going offensively,” she said. “We weren’t making great decisions. Reagan has a really good middle blocker that did a great job. We played really well defensively. We served well. We were scrappy. We just couldn’t put the ball away.”

The loss overshadowed a spectacular night by senior McKenzie Stakely, a libero machine. The other defensive specialists, players like Justice and Kimball Little, were stellar.

“McKenzie played out of her mind,” Brandon said. “It was probably the best match I’ve ever seen her play. Her strength has always been defense. She was really good in serve-receive. She picked up some balls that nobody in the gym thought she was going to pick up. Reagan has a really good outside hitter that can rip the ball across the court, and McKenzie stood right in there and sent perfect balls to the target.

“From a defensive standpoint, we played great. Peyton and Kimball had great matches. That’s what’s frustrating. We didn’t necessarily play bad. We just couldn’t put the ball away.”

Davie buried visiting Reynolds in three sets on Dec. 3. That’s exactly what you expected between the 5-1 War Eagles and 0-6 Demons, who have lost each match in three sets. Brandon held Senior Night for Stakely, Dyllan Everhardt, Kaylee Krause and Tilley.

“We played really, really well in the first and second sets,” she said.

The War Eagles entered the week alone in second place. Although only the regular-season champion gets an automatic playoff berth, there are wild-card opportunities.

If Davie takes the rematch with Reagan, runs the table from here and shares the CPC title, the team that advances the deepest in the CPC Tournament will earn the automatic berth.

“After automatic qualifiers, the next bid goes to winning percentage,” Brandon said.