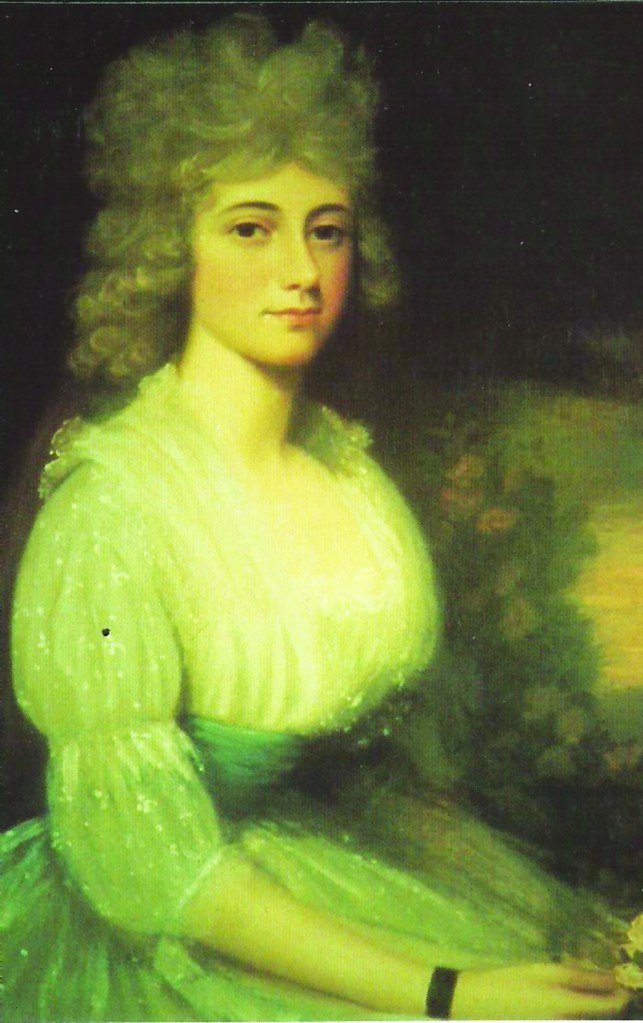 Louisa Johnson was born in England. Her mother was English and her father was an American businessman who was living in England at the time of Louisa’s birth.  Louisa was born in 1775. She was educated in England and in France where she attended a convent school and learned to speak French. Louisa was a talented young lady, who loved to sing and who played the piano and the harp.

Louisa met a young diplomat, John Quincy Adams, while he was serving in England. They met in 1795 and were married about two years later. At the time of their marriage, Louisa was 22 years old and John Quincy was 30.  Literature seems to indicate that theirs was not a happy marriage.  Mr. Adams’ temperament was much like that of his father, John Adams, the second President of the United States. John Adams is described by one writer as being brusque and abrasive, words that also seem to describe his son.  The word dour, which is defined in the dictionary as stern, obstinate, gloomy, and sullen, has also been used to describe both the Adams father and son.

In other words, John Quincy Adams was not the understanding, supportive husband that Louisa Johnson Adams needed as she and her husband moved from country to country as his assignments changed. John Quincy Adams’ father, John Adams, and his wife, Abagail, seemed to have a loving relationship which was kept alive through correspondence when they were separated. Louisa Adams did not seem to have that kind of support from her husband, which made life hard for her.

The descriptions of Louisa Johnson Adams seem to paint her as a refined, talented lady who was a gracious hostess when the situation demanded it. She also seemed to be able to smooth some of the rough situations which were created by her husband‘s gruff personality. Louisa also had grit, which is described in the dictionary as firmness of mind and spirit, unyielding courage when such is needed.  Those character traits were revealed by her action in the following incident.  John Quincy Adams was a minister to Russia, an assignment which Louisa hated but which she handled with as much grace as she could manage. Mr. Adams left his wife and small child in Russia and went on a mission to France. He sent his wife a message that she should join him in Paris. Louisa and her young son traveled 1,000 miles across Europe in the dead of winter, often in deep snow and in areas where highwaymen often harmed travelers with only a servant or two to help  and protect them. When Louisa finally reached France, she was almost pulled from her carriage by Napoleons’ troops until she was able to convince them that she was an American.

After John Quincy Adams and his wife returned to the United States, he ran for President. The election was a close one and was finally decided in the U.S. House of Representatives in John Quincy Adams’ favor.  John Quincy Adams’ term as President was tough partially because of the sectionalism and factionalism that prevailed in the country at that time. The Adams’ term as President was also tough for Louisa who found the White House a lonely place, but she did perform the duties of First Lady in an admirable manner. Her pleasant personality made her guests feel welcome and comfortable. There again she sometimes had to smooth the rough spots created by her less hospitable husband.

John Quincy Adams was a one-term President just as his father had been. John Adams was bitter when he was not elected for second term, and John Quincy was also probably also disappointed by his defeat.  John Quincy and Louisa Adams moved to Quincy, Mass., the place of his birth. The culture of Quincy was so different from that in England that Louisa was not really happy there.

During his last years, John Quincy and his wife got interested in the movement to abolish slavery and also in promoting women’s rights. They felt that they made some progress concerning those issues. Those years when they were working together with common goals may have been the happiest years of the Adams’ marriage. After her husband’s death, Louisa Johnson Adams remained in Washington. She died four years after the death of her husband and was buried beside him the First Parish Church Cemetery in Quincy. Louisa Johnson Adams was a lovely, talented lady who suffered many hardships in her life but who carried out the duties of First Lady in an admirable manner.

Visitors to Quincy, Mass., which was once called Braintree, can visit the birthplaces of both John Adams and his son, John Quincy.  The Adams Home, which is sometimes called Peacefield and at others The Old Place, is also open to the public. That house, where the former President John Adams died, was owned by the Adams Family for many years. It is now administrated by the National Park Service.