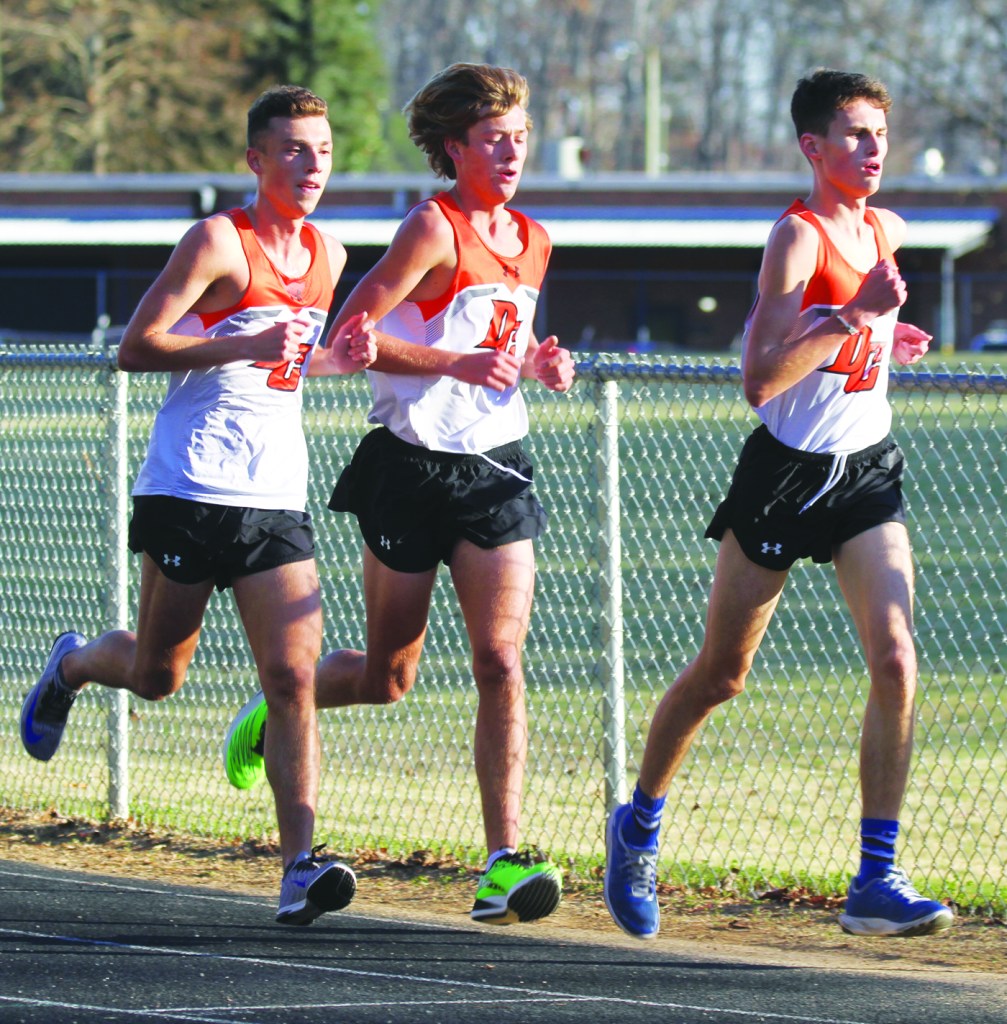 The Davie cross country teams made their long-awaited debut two weeks ago with a pair of meets against area teams. Due to safety guidelines imposed by the NCHSAA, this season is like none other in the history of the sport. At least for this season there will not be any huge invitationals with dozens of teams and hundreds of runners. And the usual season beginning in August and concluding the first Saturday of November is a distant memory.

Under the new guidelines, races are limited to a maximum of four teams and 28 athletes per race until the conference championship in January, and competition was not allowed to begin until Nov. 16. Fortunately, the weather cooperated and perfect conditions greeted the War Eagle runners as they kicked off their season.

The varsity boys and girls travelled to East Bend for a tri-meet against Forbush and South Stokes on Nov. 19. A slow course with a mix of pavement, gravel and soft ground, as well as numerous hairpin turns, greeted the Davie harriers. Despite those factors, Davie runners still managed to turn in several personal record (PR) times. Davie swept the top four spots and seven of the top eight in route to a near-perfect score of 16 points and the team victory. Forbush edged South Stokes 60-62 to grab second place.

Junior Andrew Brown led the way with a winning time and new PR of 17:26. Senior Nate Brooks followed in 17:34, while junior Caleb Young took third in 18:07. Sophomore Owen Sulecki crossed the line fourth with a new PR of 18:36. Forbush senior and 2019 state qualifier Nate Warden interrupted the Davie sweep with a fifth-place finish. Junior Cole Swade rounded out the scoring with a sixth-place finish in 19:03 as he finished one spot ahead of sophomore teammate Sebastien McEwen, who turned in a PR of 19:06. Sam Warner placed eighth in 19:14, while Ethan Page grabbed the 16th spot in a field of 19 finishers.

The Davie girls also turned in a dominating performance as they claimed five of the top seven spots. The effort was all the more impressive considering the War Eagle lineup featured two sophomores and three freshmen.

Sophomore Riley Almond dipped under 21 minutes for the first time with a new PR of 20:52  to outpace runner-up and 2019 state qualifier Bianca Gonzalez, who ran 21:06 on her home course. A wave of Davie athletes followed as sophomore Lexi Kulis placed third in 22:07. She was followed by a trio of freshmen making their debut in the orange and black. Makenna Groff was fourth in 23:39, Gracie Spicer claimed  fifth in 23:47 and Lilli Seats was seventh in 25:22.

In the team competition, Davie raced to a perfect score of 15 points to outpace South Stokes (40). Forbush did not register a team score.

“Coach (Jeff) Jones and I were really pleased with everybody’s performance today,” said head coach Rob Raisbeck. “Our top three guys ran together the first two miles and showed a good level of fitness. Owen and Sebastien ran very well. Cole was steady as usual and Sam is coming on after missing quite a bit of time with an injury. We have a lot of work to do before the CPC meet Jan. 6 but this was a good first step. Everybody was really excited to get back to racing after having not competed since February.

“The girls all competed hard as well. We had three girls who had never run a 5k high school cross country race before so we didn’t know what to expect. Now that they have a feel for what it’s like I think they will show dramatic improvement over the next six weeks. The main thing for our young girls is for them to be consistent in their training and commit to getting better everyday by doing the little things that will enhance their fitness.”

The day before the varsity race, the JV opened the season against East Forsyth at Ivey Redmon Park in Kernersville. Reagan was scheduled to participate but did not appear for the meet. The War Eagle boys and girls easily won both races – with the girls sweeping the top five places. And get this: East Forsyth ran its varsity.

The girls were led by individual winner Presley Jones. According to Raisbeck, Jones is actually the No. 3 varsity runner but the coaches elected to have her run the Ivey Redmon course because the softer surface would cause less of a strain on her legs as she deals with shin splints.

The 2-5 spots all went to Davie runners. Freshman Logan White placed second and was followed by sophomore Jordyn Cassada, sophomore Cyndle Nix and junior Ava Rajacich. Unfortunately, accurate times were not recorded as all of the runners made an errant turn which shortened the course by about 300-400 meters.

“Just like with the Forbush meet, we were pleased with the results of this race,” said Raisbeck. “Presley ran her best race ever and Will showed a lot of promise for the boys. Our girls are tightly bunched for the six and seven spots so we are looking forward to seeing who steps up and grabs the last two varsity slots by the time we get to the conference meet.”

Next up for the Davie runners will be two more CPC tri-meets at Ivey Redmon. The varsity will race Dec. 2 and the JV will run Dec. 10.