Varsity volleyball roars out of gate 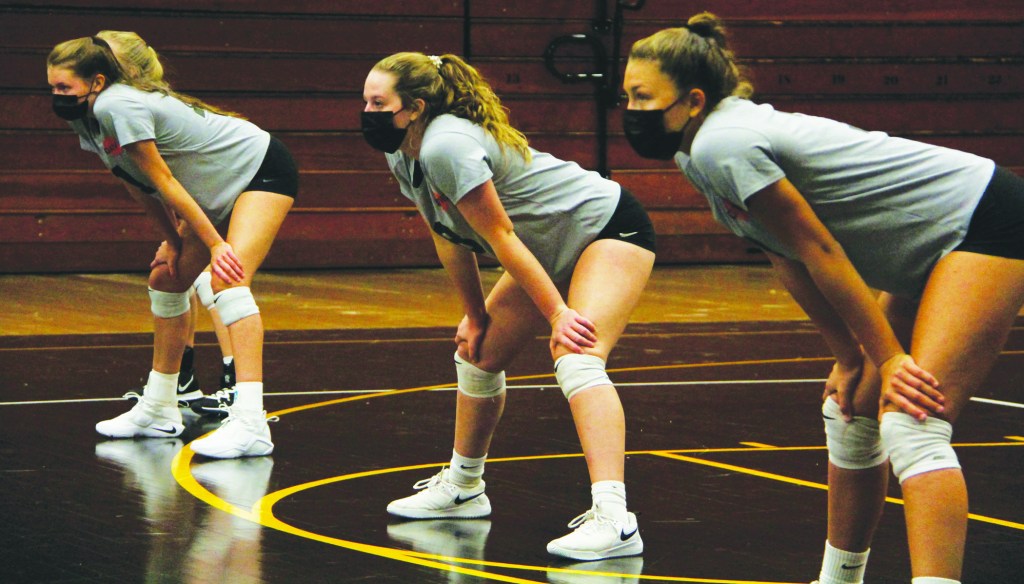 It’s too early to make wild predictions – we’re two matches in and West Forsyth was missing a major talent – but Davie’s varsity volleyball team appears to have the talent and skill to make a run at the Central Piedmont Conference championship.

After nearly eight months of seeing no high school sports because of COVID-19, the War Eagles kicked off the 2020-21 season with two shutout wins – and both were against CPC competition. Talk about roaring out of the gate.

“We’re seven practices in and we’ve focussed on winning the serving and pass game,” coach Amber Brandon said. “We want to be the most aggressive team in the conference behind the service line, and we want to be the most solid in serve-receive. We feel like if we can do those two things that we have enough good hitters to be a really good team.”

Ali Angell and Abigail Reynolds got Davie off and running.

“In the first set we were firing on all cylinders,” Brandon said. “Ali was 7 for 8 in kills. Abby went on a 13 serving streak. Abby had some really good swings. She’s really been working on her line shot.”

“We have a solid team,” Brandon said after the home opener on Nov. 19. “We’re not a team that has a superstar, but we have a lot of great high school volleyball players. It’s a fun group to coach because the ball gets spread out.”

The Titans suffered one CPC loss in 2019, and they swept all three meetings from Davie, including the championship match in the CPC Tournament. But everything clicked again as the War Eagles picked up a joyous victory.

“(West’s coach) called her first timeout at 6-0 in the first set,” Brandon said. “What we’ve been working on in practice is starting really, really strong.”

Senior setter Elizabeth Tilley and Reynolds, a junior, were both superb.

“Elizabeth had a great match,” she said. “She was on varsity as a sophomore. I made the decision to bring her up during Lauren Grooms’ senior year just for her to work with Lauren in practice and learn from Lauren. Last year with Jessica Crosby coming back and playing her senior year definitely cut into some of Elizabeth’s time. But she had a great night tonight. She went on a couple big serving runs. She had a good game defensively. She had strong leadership presence on the court and on the bench.

“Abby had a huge game. Going into the season, I knew that was a kid that had to grow up real quick, and she made smart decisions. She got blocked early in one set and let it roll off her back and went right back to being aggressive. I’m excited to see her do that.”

“West has a phenomenal outside hitter,” she said. “(LaRue) took some really big rips in the first set. We had a game plan for how we wanted to block her and defend her, and the kids executed it beautifully. In the first couple points of the game, McKenzie laid the ball right in the setter’s hands. We did a good job of getting their big hitters frustrated. McKenzie (also) had two big aces in a row.”

“Kiah had a couple big kills at crucial moments,” she said. “The third set was by far the tightest set, and Dyllan came alive. She had two big blocks in a row.”

Notes: Brandon acknowledged the Titans were not at full strength. Senior setter Leila Landrum injured a knee during a 3-2 loss to East Forsyth in West’s opener. “West had a major injury,” she said. “I don’t want to take anything away from our kids, because they played phenomenal, especially in the first and second sets. But West had to change their offense. They were definitely a little off-balanced the first two sets. I was proud of our kids for taking advantage of it.” … Davie has a 35-win streak against Reynolds, 24 of which have ended in three sets. … Brandon is 10-3 against West in her six years at Davie.