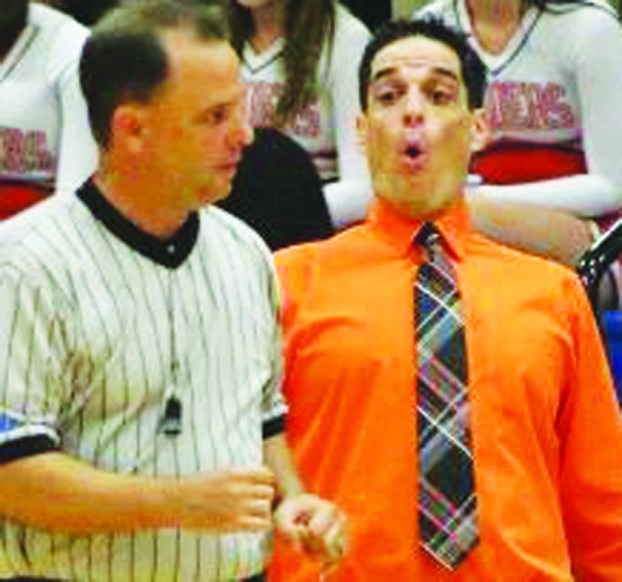 His three years at Davie – two as coach of the freshman boys basketball team and one as the JV coach – were absolutely amazing. He got his first varsity head job at East Rowan. It did not go well in Granite Quarry, but since then he’s produced a 269-185 record across 16 years at two stops in Florida.

Kurnitsky grew up in West Palm Beach, Fl., playing football and basketball at Wellington High. He attended Florida State and was a student-manager for the men’s basketball team. Another student-manager was Mitch Young, whose father Jim was the Davie varsity boys coach from 1997-98 through 2001-02.

For two years (1995-96 through 1996-97), Kurnitsky coached JV at perennial power Clearwater High in Florida. He was a substitute teacher there.

After Jim Young’s first year at Davie, a spot for a history teacher was available. Kurnitsky joined Young’s staff in the summer of 1998 at the age of 25.

“I’ve always wanted to coach in a one-school county,” Kurnitsky said in 1998. “I figured that’s kind of like a dream situation. Coach Young was a big reason. I had a great mentor at Clearwater. I learned from a great guy and I want to learn from coach Young, too, another mentor.”

Young said in 1998: “He’s a very good teacher. He’s young, he’s eager and he’s had some good experience at one of the top teams in the state every year. And he’s a gym rat, and that’s what we like.”

Sean Stevens was a big star, averaging 20.5 points, including 37 in a 68-40 rout of North Davidson and 36 in a 78-71 shootout win over Reynolds. The long-range bomber was complemented by Andrew Daywalt (11.5 ppg, double figures in 14 of 19 games), Jason Hogue (10.8) and David Wooldridge (7.5). The roster included Neil Rice, Kenny Orsillo, Josh Pfaff, Justin Dotson, Brandon Gentry, Donnie Vestal and Doug Smith.

Kurnitsky moved up to JV for the 2000-01 season. The War Eagles’ average margin of victory was 29 during a 5-0 start. Although they opened the season with a 94-81 home win over Alexander Central, Kurnitsky’s 31-game winning streak was stopped in the sixth game at Central, 59-43, because Davie was outscored 13-1 in the fourth quarter.

It won the next eight, including 104-41 over Salisbury; 66-59 over Reynolds, when Garner was doubtful with an ankle injury but played through it and turned in 14 points and seven assists; and an incredible 74-70 overtime decision at home against Chris Paul and West Forsyth.

Against Paul and the 13-0 Titans, the War Eagles trailed by 10 with two minutes left in regulation. Willoughby, who had not scored all game, capped a huge rally with a game-tying shot at :07. Seconds later on the defensive end, Willoughby took a charge from Paul. Garner nailed a big 3-pointer in OT. Luke Phelps finished with 28 points and 15 rebounds. Moser had 20 points and five steals, and Garner had seven of his nine points down the stretch.

“Chris Paul was on JV as a sophomore; that’s how good West Forsyth was,” Kurnitsky said last week. “He had kind of an attitude, so the coach was teaching him a lesson. Chris Paul was in tears shaking hands.”

Suffering a major letdown after the emotional win, the War Eagles dropped the next game at Tabor, 74-58. They carried a three-game winning streak into the rematch at West Forsyth. Paul was anxiously waiting, and he put up 37 points against a box-and-one. West outscored Davie 27-8 in the third and breezed 92-62.

The War Eagles dusted themselves off and won the final three to finish 20-3 and 6-2 in the CPC. Moser averaged 18.5 points, Phelps 9.8, McNabb 9.7 and Garner 9. The roster also consisted of Vestal, Orsillo, Law, James, Zach Hanrahan, Carter and MacBryde.

After carving out a 56-4 record at Davie, Kurnitsky was eager to start his own program and he accepted the job at East Rowan. He had two rough seasons there (11-37 record) and decided to return to Florida in 2003, becoming an assistant at Godby High in Tallahassee, Fl.

He was at Godby for one year before getting another shot as a head coach. He took over at Port St. Joe in 2004 and spent 10 years there. He built a 2-A monster, winning seven straight district championships, advancing to four final fours and reaching the state championship game in 2007.

The Tiger Sharks settled for state runner-up against Arlington, a five-time 2-A champion. “We were up one in the third and lost by 29,” Kurnitsky said. “I went Dean Smith four corners to start the game. We were slowing it and slowing it. Eventually, we couldn’t keep up.”

Now Kurnitsky was ready to see what he could do at a larger school. He arrived at Orange Park High in Orange Park, Fl., in 2014 and he’s been there ever since.

“I love Port St. Joe; I’m still a St. Joe guy,” he said. “But it was time. I talked to my wife about moving to a bigger city like Jacksonville. St. Joe is small. I always wanted to take over a bad program and make it good. My family thought I was crazy. I said: ‘We’re going to go to Orange Park.’ They looked it up on maxpreps and my son was like: ‘What are we doing? They won eight games last year.’ I said: ‘Those are the best jobs to take. There’s only one way to go.’ I wanted to move up to a big school. Triple-A coaches want a shot in the big leagues. You want to see what it’s all about. We’re a 5-A school. We’ve got 1,600 kids in our school.”

Right away, Kurnitsky remade the Raiders from an also-ran to a contender, winning 14 games in Year One in 2014-15. They’ve enjoyed six winning seasons in six years under Kurnitsky, including four straight playoff appearances.

The only downer: The Raiders have caught the wrath of the basketball gods the past four years in the first round. There have been devastating defeats.

“We keep getting bounced in the first round,” he said. “We can’t catch a break in the playoffs. Three years ago, we got beat on an 80-footer. We tied it with three seconds left. They inbounded and threw it in like a SportsCenter highlight. Last year we lost in overtime. Four years in a row we’re in the playoffs and we have these heartbreakers.

“But from where we started to now, it’s amazing. I tell the kids we’re knocking on the door. When we bust that door down, we’re going to win a bunch of playoff games.”

“I could have been like (Syracuse’s) Jim Boeheim and had 400 wins by now,” he said with a laugh. “But I think losses early in the season can be really good for you. It gets you remotivated. I’ll play anybody. I don’t want to be undefeated.

Derek and Kim have been married 15 years. They have three children and one grandchild. His seventh season at Orange Park is about to begin and Kurnitsky cannot wait.

But no matter how much success Kurnitsky has the rest of the way, he’ll never forget his Davie days.

“I liked St. Joe and I like Orange Park,” he said. “But Davie County was a fun place to coach and teach. I really enjoyed that place. I coached two hall of famers – Sean Stevens and Duane Phillips. Some of those times at Davie County were the most fun I’ve ever had coaching. I had a freaking blast.”

Brittani Steger’s coaching career began with a glittering record of 16-1 overall and 9-0 in the Central Piedmont Conference in... read more