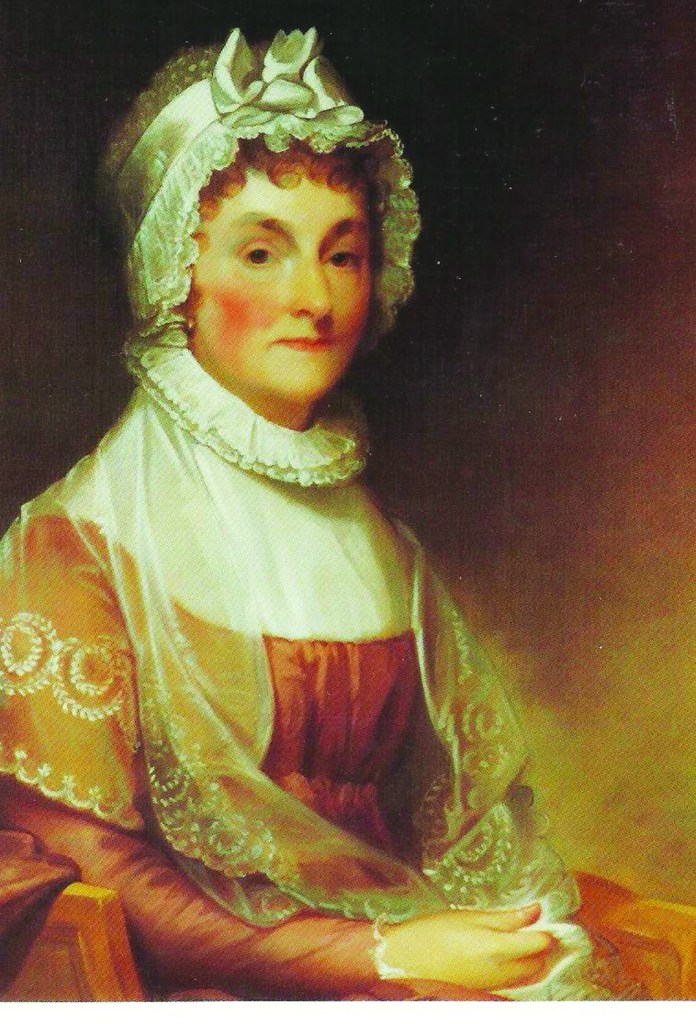 Abigail Adams was born in Weymouth, Mass. in 1744. Among her ancestors were members on the Quincy family, a prominent New England family. Abigail’s father was a member of the clergy, a highly respected part of the fabric of New England at the time of her birth. Abigail did not receive much formal education, but she was bright and had a great desire to learn. After she learned to read, she read any printed material she could find.

This attractive, largely self-educated young lady, who loved books, attracted the attention of a young, Harvard-educated lawyer, John Adams. The attraction turned into love and the young couple was married in 1764, when Abigail was 19. John and Abigail were always devoted to each other. Their marriage lasted more than a half-century.

John and Abigail had five children; one of whom died as an infant. During many of years of the Adams’ marriage, John was away from the Adam’s home in Braintree, Mass. much of the time serving his country. While John was away, Abigail stayed at their home, cared for their four children, and managed their small farm. Throughout those and later years, she was interested in and out-spoken on matters concerning politics. While John was serving in positions involved in passing laws, etc., Abigail readily shared her thoughts and feelings with her husband through letters if she was not able to speak with him in person.  For example, when a special piece of legislation was being considered, she wrote to her husband and said, “Don’t forget the ladies.”

Mr. Adams may not have followed her advice, but she continued to freely give it. She and her husband wrote letters and more letters, many of which have been preserved and which provide much information about the history of the period in which they lived.

John Adams served in diplomatic roles in France and Holland and later as a minister to the Court of St. James. Abigail was able to join him some of the time during those assignments. She observed the manners of the French and that exposure helped her when she was in positions which required her to entertain.

While on a foreign assignment, John and Abigail decided, or maybe it was just Abigail who decided, that they should have a larger house. Their house in Braintree was a typical salt-box style house that was rather small. Abigail remembered a house in Braintree which she had admired since she was young so they decided to buy that house sight-unseen. That may not have been a good way to purchase real-estate because when they came back to Braintree, they discovered that the house was not quite as great as she remembered it.

In typical Abigail fashion, she set out to make the house fit the family’s  needs.  She felt that  the living/ reception area was too small to meet the needs of the family. Abigail was told that she could not change the roof line of the house so she simply had the workmen dig down and make the floor lower in the addition so she got what she wanted without changing the roof line.

John Adams served as George Washington’s vice president, a position which he found constricting.  In fact, he is quoted in a book titled, “The Presidents of the United States of America” by Freidel and Sidey, as saying, “My country has in its wisdom contrived for me the most insignificant office that ever the invention of man contrived or in his imagination conceived.” More recent vice presidents have agreed with that assessment of the office. During the years that John served as vice president, Abigail was with him at least part of the time. She was often by the side of First lady Martha Washington as she entertained. Mrs. Washington seemed to think highly of Abigail and enjoy her company.

After serving as vice president for eight years, John Adams was elected as the second President of the United States. Abigail made her way to Washington, a journey which was quite difficult because there were not any roads in some areas so her carriage driver had to find his way through the forest.

The President’s House was only partially finished when the John and Abigail Adams moved into it. The plaster on the wall was still wet, and it was cold and drafty. Abigail had to hang her laundry to dry in what is now the elegant East Room. The living conditions for the Adams family were not good, but as usual, Abigail seemed to make the best of the situation without a lot of complaining. She entertained in a way that was appropriate for the First Lady of the land.  In fact her pleasant personality helped ease the rough spots that her husband sometimes created – he could be rather abrasive at times.

After serving for four years, Adams sought another term as president, but was defeated by Thomas Jefferson. Adams was disappointed and disgruntled by his defeat. He no doubt felt that he had spent years serving his country only to have his country turn its back on him. John and Abigail returned to their home in Braintree, which by that time may have been called Quincy, as it is today.  They lived at their home, “The Old House at Peacefield.”

Thomas Jefferson and Adams were friends for many years, but at some point they became completely alienated – a fact which made Adam’s wife unhappy. Abigail, however, remained Jefferson’s friend and continued to correspond with him. Through that correspondence, she was able to bring about a reconciliation between the two men, and they once again enjoyed corresponding with each other. That correspondence and his correspondence with others seemed to be about the only pleasure that Adams had during his last years.

As Adams lay dying in his bed at “The Old House at Peacefield,” his last words were: “Jefferson still lives.” In truth, Jefferson had already died earlier that day, July 4, 1826.  John Adams was buried at the United First Parish Church beside his wife who died in 1818.

President John and Abigail Adams’ son, John Quincy Adams, served as the sixth President of the United States and his personality was some-what irascible much like that of his father. Also like his father, he was not reelected to a second term. He did later serve as a member of the U.S. House of Representatives. He actually was stricken while at the United States Capitol in Washington, DC and actually died there in 1848.

“The Old House at Peacefield” and the John Adams’ and John Quincy Adams’ birthplaces are part of the National Historic Park System and are well worth a visit for those who are interested in presidential history. They may be closed now in November 2020 because of the pandemic, but are normally open to the public.