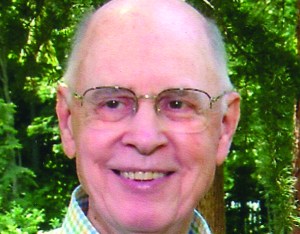 He was born Feb. 9, 1926 in High Point, the son of the late David Allison Long Jr. and Jennie Mae Fife Long of Thomasville. He grew up in Thomasville where he was a member of First Presbyterian Church and served as its organist while in high school. A World War II veteran, he served in the 78th Infantry Division 1st Battalion of the 310th Regiment, and participated in the battles of Remagen Bridgehead and Ruhr Pocket. Following VE-Day he was a chaplain’s assistant in Berlin before being discharged in 1946. He was awarded the Bronze Star.

He graduated from Davidson College in 1949 and UNC Law School in 1952, and later earned a D.Min. degree from Union Presbyterian Seminary in Richmond. He met his wife, Ann Phifer Hammond, in Charlotte while practicing law, and they married in 1955.

Ordained on Jan. 26, 1958 as a Presbyterian minister, he served as pastor of First Presbyterian Church of Mocksville, Armstrong Memorial Presbyterian Church in Gastonia, and First Presbyterian Church of Hamlet. Dr. Long and his wife moved back to Mocksville in 1980 where they restored and lived in the historic Jesse Clement House before moving to Salemtowne Retirement Community in 2006. He was honorably retired by Salem Presbytery in 1984 but continued working as interim supply or temporary supply in Salem Presbytery. He also was a part-time chaplain at the VA Hospital in Salisbury. Dr. Long was active in YMCA work in Davie County and in the American Cancer Society in Gastonia, and also in the ministerial associations of communities he served. He was a commissioner to the General Assembly of the Presbyterian Church in 1975, and was a trustee of Davidson College from 1972 to 1980.

Surviving: his wife of 65 years, Ann; his daughter Nancy Metzler and her husband Charles,of Charlotte; his son, William F. Long Jr. and husband Dr. Raymond Hahn of San Francisco; 3 grandchildren, Elizabeth Metzler, Andrew Metzler and wife Jessica, and John Metzler; a sister, Mary Jarrell of High Point; a brother, the Rev. Dr. David Long of Jamestown and wife Mellie; and an extended and well-loved family of cousins, nieces and nephews and great nieces and nephews.

A graveside service will be held on Monday, Nov. 9, at 11 a.m. at the Long family plot at Calvary United Church of Christ cemetery, 1410 Lexington Ave., in Thomasville, 27360.