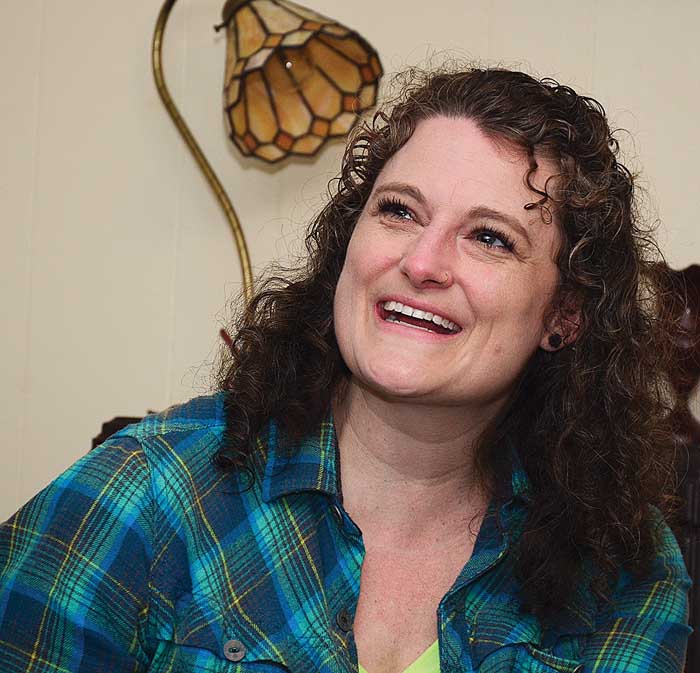 But looks can be deceiving.

The Advance resident – after years of treatment for a variety of conditions – has been diagnosed with chronic lyme disease. And while it was gratifying to finally have confidence in a doctor’s diagnosis – the treatment isn’t easy. And it’s expensive and not covered by insurance, either.

On Saturday, members of Bethlehem United Methodist Church are hosting a barbecue to benefit Ervin, who is trying to raise $80,000 up-front money for the treatment she hopes will some day allow her to have a family. That’s on top of the thousands of dollars of medications she already takes.

Lyme disease is caused by a tick bite, and doctors think she may have been around age 10 when she was bitten. The problem – she didn’t know it at the time.

She remembers getting really sick some eight years ago while visiting her brother, a Navy officer stationed in San Diego, Calif. She wasn’t eating, but was gaining weight – a lot of weight.

“The doctors said, ‘We don’t know what’s wrong with you, but you need to go home to your family’,” she said.

It began a long list of doctors who diagnosed and treated the symptoms. Lyme disease mimmicks many other ailments, especially when infected for the long term such as Ervin. At one point, a doctor told her she had two weeks to live.

“Nothing was getting better,” she said.

Then a friend asked if she had ever been tested for Lyme Disease. She hadn’t. No doctor had mentioned it. And when she would bring up the question, the doctors – one after another – would tell her she didn’t have Lyme Disease. “You’re fighting a system that isn’t made for you.”

Her mother helped find an integrative doctor, who started the first appointment with 19 pages of questions. She learned that her symptoms all could be traced back to Lyme.

“The results indicated a long-term infection,” she said. “Your system is so impacted. Nothing works. You’re so sick and you can’t heal.”

The Lyme infection led to others. The bacteria were so strong that traditional antibiotics couldn’t penetrate them. “I would feel like bugs were crawling all over me.”

The bacteria typically hit the brain, joints and the gut. She suffers from all three.

“It’s crazy when you think about it,” she said. “Two doctors said I was bitten when I was about 10 years old.”

Psyciatric problems are common, and Ervin hasn’t been immune to that, either. She has one friend who committed suicide, a more common trait among men. She remembers crying out of control while watching a cottage cheese commercial on television. Schizophrenia is often a result of the infection.

“I was normally a person with a ton of energy,” she said. Now, she looks forward to having enough energy and a low enough pain level just to be able to walk to the mailbox.

She had to quit her job. She no longer drives a vehicle. She’s sick more often than not. There’s times she can’t walk.

“There were improvements at times, but there was no longevity to it.”

She loves photography, but can no longer hold a camera steady.

She thinks the problem got worse in 2016 because of stress. She lost several close family members.

She’s overcoming that mental battle. She has a “feelinglymie” website with testamonials. “I feel like I have a mandate on my life to spread hope,” she said. “I feel that Christ’s death was not a lie. There is hope.”

She worked with troubled kids at a church in Wilkesboro, and had them write promises from God on their arms. “And I told them to write, April loves me.”

“It’s a mandate on my life to carry hope, to impart enough gratitude and to plant in people that there is hope.”

Her issues worsened in the spring of 2020, when she went 17 days without eating. Nothing would stay down. Not even ice. It left her not wanting to eat, not wanting to even look at food. Her father, Gary, had a health issue. Her dog had died.

She had hit rock bottom. “This is not worth it,” she thought. “How can I keep going?”

A trip to see a worldwide specialist in Lyme Disease in Washington, D.C. offered hope – and the $80,000 nine-month treatment – much at the facility in Washington, and much more at home, where her mother – Jane Ann – will be her caretaker.

Ervin has talked to others who went through the treatment. “It’s incredibly expensive but it will change your life,” they told her. She remembers that first six-hour appointment. A doctor gently touched her wrist in several places “My arm turned red in front of her. Then the rest of my system turned red. I was itchy all over. All because she touched me.”

Now, there are only 14 foods – including spices – that Ervin can eat. For a while, she could only stomach warm, blended foods. “Food has been a big problem for me.”

“I’m looking for the best quality of life I can have and a future to look forward to. I could start to get my life back.”

She knows two of her goals, hiking the Appalachian Trail and running a marathon, likely won’t happen.

But she could still have that family.

And hope goes with her whereever she goes.