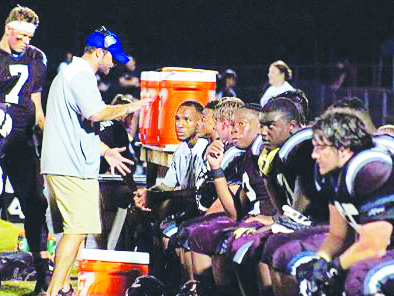 Adam Smith was a defensive starter on the 2010 Davie football team that marched all the way to the state 4A championship game after a 5-6 regular season. No team ever could top that for a Cinderella story.

He turned in one of Davie’s greatest quarterbacking seasons in 2011.

He broke game, season and career records as a receiver at Guilford College.

He has not only played in a state championship game, he has coached in one (2019 Leesville Road).

He’s a player in arena football, with two seasons under his belt and a third hopefully coming in spring 2021.

Whew. He’s done a lot in football over the past decade.

As a Davie junior, Smith played cornerback for coach Doug Illing’s War Eagles. After limping to 5-6 and 3-2 for third place in the Central Piedmont Conference – the two league losses were both at home and both were ugly, as in 34-0 to Mt. Tabor and 51-28 to North Davidson – Davie went nuts in the second half and buried North Davidson 35-10 in the first round in Welcome. The War Eagles rallied for 30-29 overtime win at Tabor, perhaps the most memorable upset of all time. Smith came up with a gigantic, game-turning interception in that one. Davie got a home game in the next round and staved off High Point Central 18-15. Then Davie traveled to Porter Ridge, came out like gangbusters and held on 21-14. The state championship game was a 40-0 loss to an unbelievable Hillside team.

After serving as Carson Herndon’s backup at quarterback in 2010, Smith was handed the offensive keys as a senior. Fans witnessed a meteoric ascension. A very persuasive case can be made that his 2011 quarterbacking run is one of the top three or four of all time, and Davie’s been in existence since 1956.

He could make defenders grasp for air as well as he could zip precision passes all over the field. He threw for 1,917 yards and 18 touchdowns in 12 games, while only throwing three interceptions. What’s more, he was the No. 2 rusher with 771 yards on the ground. He averaged 6.5 yards per carry and ran for 11 TDs. Oh, and he also played occasional defense when it was do-or-die time and had two INTs. That team went 8-3, 4-1 in the regular season and tied Tabor for first. The season ended in excruciating fashion. After opening up a nice lead, visiting Dudley stormed back to steal a 29-25 first-round decision, the winning points coming in the final 10 seconds on a throw-it-up-and-pray heave by a Panther QB who wasn’t known for his arm.

Smith didn’t receive any scholarship offers because of his lack of size. He went to Guilford with intentions of playing quarterback; he was quickly moved to receiver. As a freshman in 2012, Smith scraped and clawed his way into the starting lineup.

His next chapter was coaching. He was an assistant for two years at Hampden-Sydney. Then he landed a job at Wakefield High in Raleigh.

“They were able to find me a spot as a teacher assistant in special education,” he said. “They were going to allow me to be offensive coordinator, which was my ultimate goal.”

Smith walked into a program full of gloom and doom. The Wolverines, a 4-A school, went 0-11 and averaged a meager 9.8 points the year before Smith’s arrival in 2017.

Smith was the offensive coordinator in 2018, a season that began with a 37-12 loss to Leesville Road. That pushed Wakefield’s losing streak to 15. The streak ended the next week as Wakefield broke loose for a 31-9 decision at Millbrook. It was the Wolverines’ first win in 672 days.

“They went nuts,” Smith said. “I believe I have a video on Twitter.”

The Wolverines were playoff-bound and they met Fuquay-Varina in the first round. They put up a strong fight in 21-19 defeat, a game-tying two-point pass barely failing in the waning moments. While Fuquay improved to 8-4, Wakefield exited at 5-7.

“That was a great game,” Smith said. “We had a late comeback. That was a good Fuquay-Varina team, too.”

The Wolverines went 3-2 to finish second in the conference and averaged 20.5 points. Think about that: With Smith pulling the offensive strings, they went from 0-11 to five wins and doubled their scoring output from the previous year.

“It really went well,” he said. “We were No. 2 in the conference behind Wake Forest, who was the three-time running state champion. We had multiple all-conference guys on offense, which was a complete 180 from the year before.

“I took how I was treated in high school by coach Bum (Todd Bumgarner) and all of those guys – the way they treated me and how they cared about me as a person – I took that and treated my guys the exact same way. I took everything I learned about offense from my offensive coordinators in college and tried to implement them here. I tried to make everything very simple in our eyes, but make it look very complex and very different from the defensive side. So I took my human resources skills from people at Davie and took all of the football stuff from college and experiences past that.”

While keeping his teaching position at Wakefield, Smith moved 14 miles down the road to coach receivers at Leesville Road in 2019.

“Some things happened in the offseason, which resulted in me moving on,” he said. “But my season at Wakefield was really awesome. I had a great time. When Wakefield hired a new head coach, it was really late in the game. I started searching for another position. When Leesville Road offered me a job, they had already had their full staff hired, so they gave me an opportunity to coach receivers, which I was OK with.”

At Leesville Road, Smith found an established winner, the Pride going 8-5 in 2017 and 10-3 in 2018. Both years they were knocked out in the second round of the 4AA playoffs. But Leesville Road had a formidable squad in 2019.

It finished 13-1 as the state runner-up. The season kicked off with a 37-6 win over Smith’s former team, Wakefield.

“That was pretty interesting,” he said. “The former head coach from Wakefield and me coached against Wakefield. So there was a lot of positive and negative anxiety going into that game from both sides.”

The semifinal matchup against Wake Forest was an iconic moment for the Pride. Wake went 14-0, 15-0 and 16-0 from 2016-18, the 45 consecutive wins resulting in three state championships. Before the game against visiting Leesville Road, Wake was 12-1 with 57 wins in 58 games. Leesville triumphed 21-10.

“It felt like Leesville had finally gotten over the hump,” Smith said. “The year before, Wake Forest ended their season (41-10 in the second round) and we knew it was our turn. Although Wake Forest was home, the aura the whole night was that power was about to shift out of Wake Forest’s hands. The relief after the game felt eerily similar to post-Porter Ridge (in 2010).”

Leesville lost 24-3 to Vance in the state final. It was a closer game than the score suggests. With eight minutes remaining, it was 10-3.

“Our starting quarterback went out in the second quarter,” Smith said. “Some things went sideways (in the final eight minutes) and Vance tacked on two touchdowns. We really battled and Vance was really, really good.”

“The second place team in our conference was Cardinal Gibbons, who lost to East Forsyth in the 4A final,” he said. “It was really fun to coach such a talented team. From top to bottom, it was the best position group I’ve ever coached, even going back to when I was coaching in college (at Hampden-Sydney). One of my receivers (Noah Burnette) is a kicker at North Carolina. He was one of the top kickers in the nation. He just happened to be a freak athlete and could really play receiver.”

Smith loved Leesville, but he wanted to get back in position to call plays. So he’s made another coaching change, this time to Enloe, which is 14 miles from Leesville Road. He’s still a teacher at Wakefield.

Smith is the running backs coach, but “the plan is to transition into calling plays pretty quickly and be offensive coordinator,” he said. “Getting the opportunity to call plays again was the goal. I was interested in going somewhere that needed coaching and needed support. Enloe is a program that’s had success, but it’s just not a stable program. They’re a magnet school, so they don’t have access to a lot of students like a normal school does. We’ve got some talent, we just need to build a full team. It should be fun, should be a good challenge.”

Smith got married in June of 2019. He and his wife live in Morrisville, which is near Durham. No one can love football more than Smith. Not only is he going full speed in coaching, he’s still playing. His arena career began in 2018 with the Triangle Torch in Raleigh. It only took him two weeks into the season to break into the starting lineup at receiver. In 2019, he starred for the Cape Fear Heroes in Fayetteville.

“That was my best season since I was in college,” he said of the 65 catches for 850 yards and 17 TDs. “The only guy I was behind statistically (Larry Beavers) had played for the Patriots and Panthers.”

The 2020 season last spring/summer was wiped out by COVID-19. Smith is hoping to latch onto the Carolina Cobras in Greensboro next spring.

“I was ready to go with the Cobras (last season), but, of course, COVID killed that,” he said. “I’ve been talking to the staff and I’m planning to resign with the Cobras and play in 2021.”

’95 War Eagle girls work their way into the…