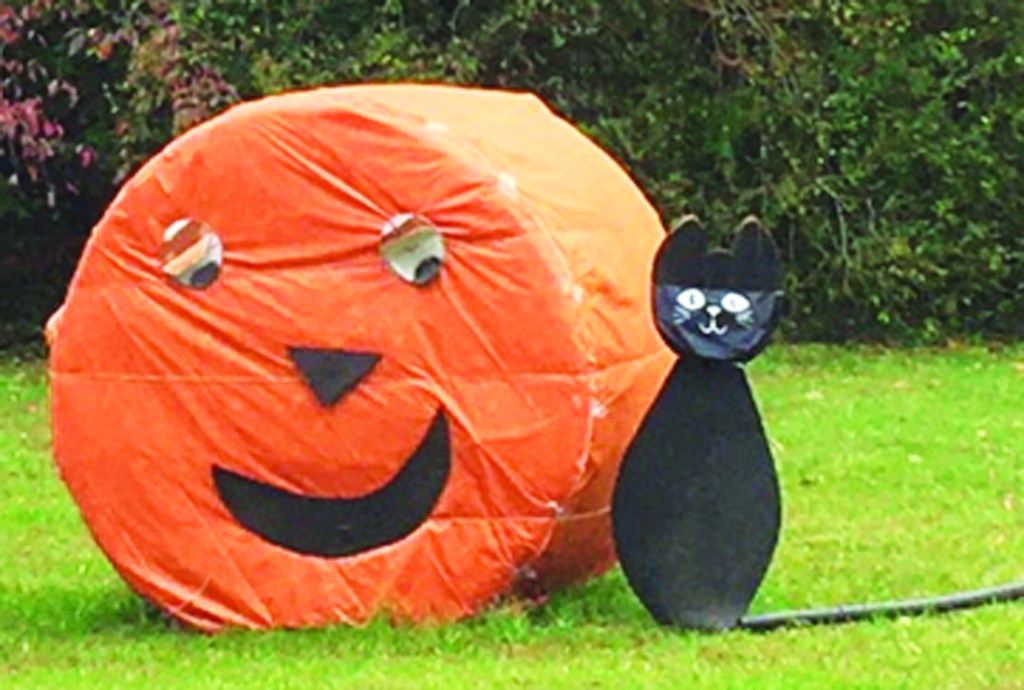 This will not be a good year for trick or treat because of Covid-19.

It will be a great year to drive the length of Cana Road and see the great decorations.

Sean McCashin and Dale Latham delivered big round bales of hay to many of the homes on Cana Road and the people who lived there have decorated the bales in the most creative and decorative ways. If they had delivered a bale of hay to my house, it would have just remained a plain old bale of hay—not so with those talented people on Cana Road.

I have driven the length of curvy, bumpy Cana Road thousands of times.  In fact, I have traveled that road so many times that I sometimes seek another route to Mocksville because I am so tired of the curves and bumps.

I traveled that road long before it was even paved—it was bumpy then and is still bumpy now, but the great Halloween decorations make it more fun.

There are bales decorated as Jack-O-Lanterns, and bales that have become witches, goblins, scarecrows, and dragons, as well as black cats.

The decorated bales begin in the village of Cana and extend all the way to NC 801 North.  A huge dragon reigns at the north end of the village and another one a mile or two north.  A most elaborate witch waits for you near NC 801.

Thanks to Sean, Dale, to Ina Kamenz for coming up with the idea, and all the Cana people who decorated bales and made this season, which has been somewhat dull, much brighter.

Nancy Collette, who moved to the Pino community a few years ago, still drives to Mocksville each day to work at Collette Art and Framing.  Nancy, who will be 90 years old in a few weeks, absolutely loves to drive down Cana Road.  She just raves about the beauty of the area.  It is a nice drive if you aren’t tried of the curve and bumps, and it is even more interesting with the added decorations.

Joseph Burchette, the son of Joe and Izzy Tutterow Burchette, celebrated his 9th birthday on Saturday at the Tutterow Barn in Cana with a party for his friends and relatives. Joseph is much more excited about his 9th birthday than his great-grandmother, Betty West, is about her next birthday, which will be number 89 – eighty years older than her great-grandson, who is indeed great. The Tutterow Barn, which is on land that has been owned by Joseph’s ancestors since 1850, was a great place for the 9 year old to enjoy a birthday party.

Kathy and Bob Ellis have just returned after spending a week at Avon on the North Carolina Outer Banks.  They vacationed with their friends, Judy and Rick Wilson. Kathy reported that there were many people in that rather remote area much to her surprise and to the surprise of the local people. People were evidently seeking a way to get out after observing the stay-at-home order.

Oliver Cujas, son of Al and Susan West Cujas, celebrated his 14th birthday on Saturday. His sister, Amy, and friend Ryan Applegate of Charlotte, and his sister, Missy Cujas and her friend David Michalski of Lewisville came to celebrate with Oliver. That was just the kind of birthday celebration that he likes most because he loves to be with his sisters and their friends. The family, mother, father, sisters and their friends went on a hike together—a perfect way to celebrate a birthday according to Oliver.

Wesley Chapel United Methodist Church began having worship services in the sanctuary Sunday.  The services were still broadcast on the radio so some people who did not feel comfortable going into the church still worshipped in their cars. Everyone is invited to join in worship at Wesley Chapel either in the church or in your car. A church council meeting was held after the worship service to consider the budget and to elect officers for the coming year.

The Wesley Chapel United Methodist Women are deep in the midst of their annual nut sale. Contact any of the Methodist Women for nuts for your holiday baking needs. The ladies have pecan halves, pecan pieces, and cashews for sale.  Get your order in early because the supply is a bit more limited this year. The Methodist Women want to thank Brenda Bailey and Phoebe Smith for their help with the nut sale – both of those ladies have been so helpful.  The ladies are also grateful to everyone who purchased nuts through the years. As the result of the last year’s sale, the Wesley Chapel United Methodist Women were able to give a $500 gift to Crossnore School/Children Home in Winston-Salem along with other gifts to missions and organizations which help children.