Mocksville Sr. Officer Charles Davidson earned the Medal of Valor for stopping an armed man from firing random shots at homes and vehicles.

In the late afternoon of Feb. 29, a vehicle approached the Town of Mocksville.

Inside the vehicle was a 30-year-old man armed with a handgun. Earlier, the same vehicle was observed in Davie County and the male inside the car was reportedly shooting the handgun from inside the moving car.

Law enforcement officers were advised to attempt to locate the vehicle and identify the people inside.

Mocksville Police Officer Charles Davidson observed a vehicle matching the description given by communications near the town limits and initiated a traffic stop.

A passenger exited the vehicle and began shooting at Officer Davidson as he was still driving and continued to fire as he was exiting his vehicle.  Davidson quickly exchanged gunfire with the individual near Southwood Drive and US 601 South.

The shooter fired multiple shots at the officer before being struck by return fire, said Mocksville Chief Pat Reagan.  The man – Ian Austin Wilson of Salisbury – was transported to Baptist Medical Center where he was pronounced dead.

Following the shooting, the police department followed the protocol for investigation following a  shooting and contacted the NC SBI. Agents with NCSBI completed their investigation and forwarded it to District Attorney Garry Frank for review.

No charges were filed against the officer and the case is considered closed.

“This incident highlights the dangers officers face, even in the local community,” Reagan said. “The quick thinking, appropriate training, and honed skills of this officer prevented any additional damage or casualties that day.

“All law enforcement personnel understand the dangers they may face when they accept the job and begin their shift,.     Regardless of the location, time of day, month, or any other condition, officers put the needs of the community above all else to ensure the public is safe and protected,” he said.

For the demonstration of exceptional courage in the effort to save and protect human life, Sr. Officer Davidson was awarded the Medal of Valor at a recent service.  This award is the highest decoration for bravery exhibited by public safety officers in the US.

“Although this incident remains tragic, the actions by Sr. Officer Davidson prevented additional loss in the town,” Reagan said.

Austin, according to his sister, Melody Council, had endured a tough life growing up “in the system.” He suffered from mental illness and had recently lost custody of his daughter, she said.

“He was not in his right mind at the time,” she said. “I know that doesn’t excuse his behavior, but he was someone’s father, brother and son and he had a good heart.” 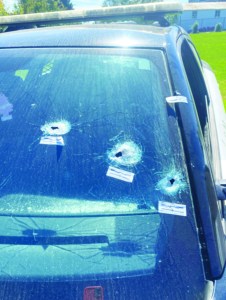 The gunshots fired at the officer’s windshield show just how serious the situation became.