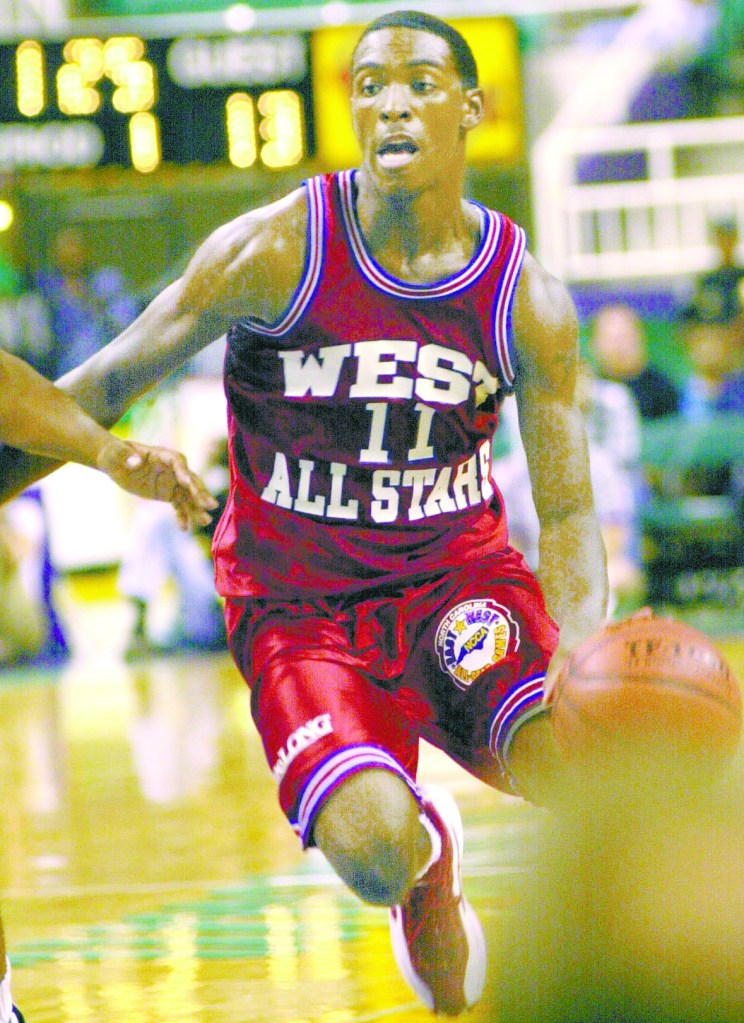 Third in a three-part series on new Davie hall of famer Duane Phillips.

Expectations were sky-high as Jim Young entered his 27th year of coaching at 410-189, with assistants Pat Cook, Leo Brunelli and Derek Kurnitsky on the bench. There were eight returners from the previous year, headlined by Phillips, who averaged 26.5 points as a junior. The other key returners were 6-7 John Orsillo, Marcus Lassiter and 6-6, 220-pound Larry Umberger. They would all be essential to Davie’s success in 1999-00. What’s more, Dominic Graham would have a huge breakout as a senior. There was also the bonus of newcomer Djordje Lukic, a 6-7 foreign exchange student from Yugoslavia. He would prove to be a stat-stuffer in the paint.

The season tipped off in the Hot Hoops Classic at Joel Coliseum in Winston-Salem. After bouncing Forsyth Country Day (97-51) and North Iredell (59-50), Davie met Bishop McGuinness in the championship game. Phillips’ performance was so mind-blowing, it’s hard to even put it into words. He scored 26 points in the fourth quarter as Davie overrode a 19-point deficit and won 77-70. Phillips ended the third with 11 points, at which point Bishop led 50-39. When the night ended, he had 37 on 13-of-24 shooting.

“If we could just wind him up for fourth quarters, it’d be fun to watch, wouldn’t it?” Young said.

Phillips becoming Davie’s first 1,000-point scorer in 20-plus years would have been dramatic enough in a game at Salisbury. But he had much more in store, scoring 13 in the final two minutes to lift Davie to a 90-87 win. He reached the milestone with a four-point play that put Davie, which had trailed by 11 in the fourth, ahead to stay. He finished with 28 and joined Randall Ward, Jingles Ijames and Dwayne Grant in the 1,000 club.

“I’m happy because I’ll be on the little plaque, but I’m more happy that we got the win,” Phillips said then.

After the War Eagles roughed up visiting North Davidson (83-47), they faced an opponent that was a step up in class. Didn’t matter. Davie raced past Garinger 103-84 as Phillips scored 34, Graham 24, Lassiter 18 and Lukic 11.

“I think we put on a pretty good show, what do you think?” Lassiter said.

At North Iredell, Davie trailed 25-16 before kicking into high gear and winning 81-51.

After Davie blistered Alexander Central 94-59 in Taylorsville, Central coach Ron Hargrave marveled at Phillips, who had 31 points and six assists, and Davie.

Davie clocked Rockingham County at home, 108-50. Then it dug a 42-25 halftime hole against visiting Northwest Cabarrus. The War Eagles cut the deficit to three by the end of the third and won 79-74, with Phillips’ corner 3 providing a 70-68 lead.

Now it was time for the Sam Moir Christmas Classic at Catawba. In the semifinals, Davie beat Salisbury for the third time, 94-76. That marked the varsity debut for Sean Stevens, the 5-7 sophomore who averaged a whopping 26 points across 10 JV games. He scored seven against the Hornets; he went on to have a hall-of-fame career with 1,232 points.

In the championship game before 3,500 fans, the top-seeded War Eagles showed a capacity crowd their inside/out expertise in an 84-65 romp over No. 3 North Rowan – the first time Davie had won the tournament since 1982. When Phillips (33 points against North, tournament MVP) wasn’t doing his thing, the Umberger/Lukic/Orsillo frontline was overwhelming the Cavaliers in the lane.

Phillips shot the Goodman Gym lights out (15 of 21) and dished out seven assists. Lukic had 17 points and 20 rebounds. Umberger had 10 rebounds and 10 assists. Graham and Lukic made the all-tournament team.

“You just don’t know how happy I am because all my family was in the stands,” Phillips said. “I wanted that championship bad.”

“You put two or three inches on him and every school in the country would knock down the door for him,” Young said of the 6-1, 160-pound Phillips.

The War Eagles brushed aside Alexander Central, 77-50, at home. They faced a 37-29 halftime deficit at North Davidson as the Black Knights rained 3s in the first half.

“When you’re undefeated, everybody’s coming at you,” Young said.

Davie regrouped, outscored North 42-22 in the second half and won 71-59 behind the backcourt duo of Phillips (34 points, seven rebounds, four assists) and Graham (19 points, six assists).

“I knew we were better than them, but we were looking forward to Reynolds,” forward Rod Tenor said.

In the build-up to the Central Piedmont Conference race, four of the top six spots in the Northwest Coaches Poll were occupied by CPC teams: No. 1 Reynolds, No. 2 Davie, No. 5 Mt. Tabor and No. 6 West Forsyth.

Davie’s CPC opener was at Reynolds. It was a Tuesday night with 2,200 fans in the house. Davie was 15-0, Reynolds 14-0. Davie didn’t pull the upset in one of the loudest spectacles in program history, losing 83-72, but it announced its arrival as a contender in the fiercest league around.

Davie got 26 points from Phillips and 22 from Graham, who scored seven in 90 seconds to pull Davie within 55-52 in the fourth.

“Hey, Davie County’s for real,” Reynolds coach Howard West said. “There ain’t no doubt about that.”

“They’re thoroughbreds,” Young said of the Demons. “They could beat some college teams around here.”

After a 10-day layoff because of snow, Davie conquered a nemesis in a 62-56 win at Tabor, which had won eight of the previous nine matchups. Davie’s 54-41 lead with 6:15 to go evaporated, and it was 56-56 at 1:12. Phillips came to the rescue, draining his fifth triple from the corner at :55 to finish with 29 points. Then Umberger stole a pass on the ensuing possession. Graham added 21 points.

“I was bricking key shots, but at that time I wanted the ball and I had a feeling I was going to make it,” Phillips said. “It was one of my biggest shots ever.”

Umberger took a crucial charge and controlled 12 rebounds. “The hero of this game is Larry,” Phillips said. “He hustled his (butt) off.”

“It was a nightmare,” a distressed Young said.

With Reynolds next, nobody thought Davie had a snowball’s chance in Hades. Why would they? Davie had already lost to Reynolds and it had just lost to bottom-feeder South.

But in a dreamlike performance one night after the dud at South, the War Eagles beat Reynolds 84-73 at home. They ended a 15-game losing streak to the Demons, beating Reynolds for the first time in seven years. A frenzied overflow crowd stormed the court. Players dumped the water cooler on Young.

“I thought I was a football coach,” Young said.

In the fourth, Graham, Reynolds’ Michael Russell and Phillips hit three 3s in a span of 18 seconds. Davie hit virtually every free throw down the stretch and won going away. Phillips had 27. Graham stroked a magical 6 of 7 3s to score 25. (“I’m on top of the world,” Graham said.) After a six-game slump, Orsillo picked Reynolds for a spectacular revival with 12 points, six rebounds, three blocks and two crowd-rocking dunks. (“This is one of the happiest basketball moments of my life,” Orsillo said.) Tenor had a career-high 11 points and six rebounds. (“He did a tremendous job off the bench,” Young said.)

Phillips: “It was unbelievable. It’s going to hit me tomorrow once I wake up: We beat Reynolds, one of the best teams in the state.”

In the next game, the first-place Titans handled Davie 65-49 in Clemmons to move to 7-0 in the CPC. Suffering from flu-like symptoms, Phillips was held to his lowest output (10) in 46 games.

“I don’t want that to be an excuse for how I played because I don’t like that,” Phillips said.

The War Eagles were missing Umberger (sprained ankle) against visiting Tabor, but Orsillo rose to the occasion with 21 points, 11 rebounds and eight assists as Davie pounded the Spartans 86-61. Lukic broke out of a slump with 13 points and 11 boards. Tenor (eight points, three rebounds, two assists) and Travis Peacock (six points, four rebounds) also stepped up in Umberger’s absence.

“(Orsillo) was everywhere,” Phillips said. “It was his game. John can do about anything.”

Graham, who had 26 points and seven assists, said: “We knew they couldn’t stay on the court with us.”

Phillips, who had 18 points and six assists, said: “We couldn’t wait to play them.”

In the CPC Tournament semifinals against Reynolds, Davie was without Phillips (strep throat) and Umberger (ankle). On top of that, Reynolds was out for blood after falling in Mocksville. Although the aggregate score of the first two meetings was 156-156, shorthanded Davie was helpless in 100-57 defeat.

Phillips and Davie came back with a vengeance, winning 84-79 over visiting Page in the first round of the 4-A playoffs. All Phillips did was stack up a triple-double (28 points, 12 rebounds, 10 assists).

“I swear I’ve been dreaming about getting a triple-double,” he said.

“It’s proven that we’re the best team in the history of Davie,” Phillips said.

Four teams gathered for the sectional finals at Joel Coliseum. All four were from the CPC: Davie, Tabor, Reynolds and West Forsyth. “You’ve got eight teams left in this side of the state, and half of them are out of our conference,” Young said.

Davie and Reynolds met for the fourth time. The War Eagles were in contention at halftime, 41-34. With Phillips scoring Davie’s first 12 points in the third and Graham burying five triples, Davie was still within striking distance, 59-52, with :31 left in the third.

But Davie was just outclassed, losing 82-69 despite Phillips’ 30. Reynolds went on to capture the state title. “We hit the hottest team in the state,” Young said. “Our game plan worked until we just wore down.”

Phillips was named an East-West All-Star, becoming the first War Eagle to receive the honor since Grant in 1977. With nearly 5,000 fans in the Greensboro Coliseum, he scored nine points as the West shocked the heavily-favored East 86-82. His layup that made it 56-54 gave the West the lead for keeps. His 15-footer pushed the lead to 59-56.

“It showed that he’s definitely Division-I caliber,” Young said. “He represented Davie County, our conference and everything very well.”

But in the summer of 2000, coach Buzz Peterson left ASU and took the Tulsa job.

“It changed my mind when Buzz left, because I really didn’t know how it would be with him gone,” Phillips said. “I talked to him like three days before he announced it. It would have been nice.”

Phillips turned to a junior college powerhouse – Spartanburg Methodist. He started at point guard both years, averaging 12 points and seven assists and helping his team to top-25 rankings in 2000-01 and 2001-02.

“After those two years, I took a year off and planned on going back to college at Mountain State University (West Virginia) with a teammate from Spartanburg,” Phillips said last week. “But I decided to let basketball go. I kinda wish I did play there because they won the DIII national championship that year.”

For Davie, Phillips was a scoring extraordinaire. Only four players have turned in multiple 40-point games: Grant with five and Phillips, Stevens and Nemanja Kreckovic with two each. Grant owns the most 30-point games with 21; Phillips and Stevens are next with 14 each. Grant is No. 1 in career points with 2,007; Phillips is No. 2 with 1,544.

“What can you say?” Young said in 2000. “What superlatives can you say about that kid? Duane is a gamer, Duane is a hustler and Duane doesn’t quit.”