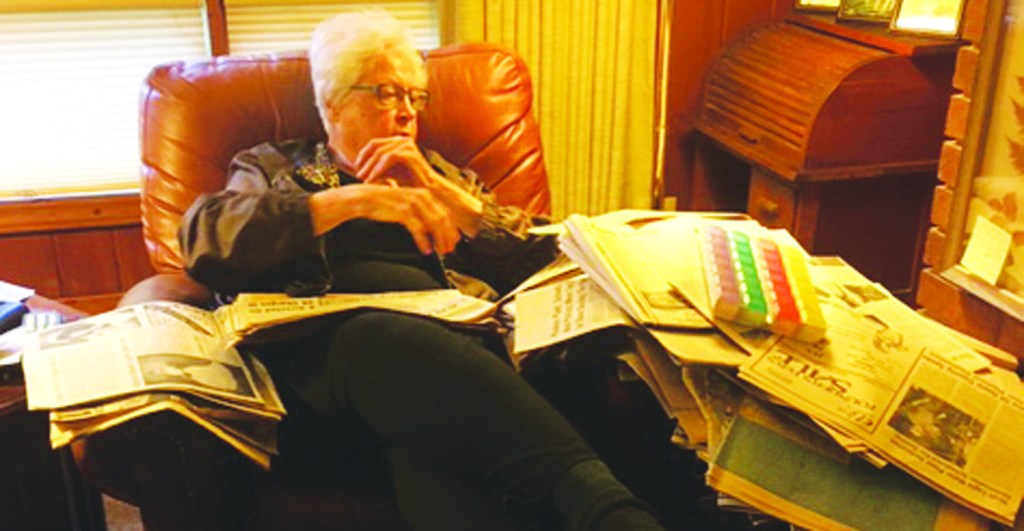 Betty West goes through a stack of old newspapers found in a drawer.

Last week I wrote about cleaning a storage space. I continued that stay-at-home-activity this week when I attacked drawers in a built-in desk in the den.  That is a fine desk, but we don’t use the desk top for writing, etc. because it is covered with stuff—a fax machine, the converter box for the cable TV, the land-line telephone with all the attached wires, and a note pad, which we can never find when we need to record a note.

That desk has four drawers, all which seemed to be full of who knows what. I now know what was/is in two of the drawers. The big middle drawer has evidently been a repository for a variety to stuff. There does not seem to be a more appropriate word to use to describe the contents of that drawer than stuff. Out came everything. In the very bottom of the drawer was a poster-size certificate from the N.C. Board of Refrigeration Examiners which awarded our son, Roland Henry West  Jr., Refrigeration Contractors License no.1486 in October 1977. That certificate should have been framed and hung on the wall of his office. That wasn’t done and it ended up in the desk drawer.

The next item was a little briefcase that contained the material I got when attending the annual meeting of the National Extension Homemakers Council in August 1965 at Perdue University in West Lafayette, Ind. I was the president of the Eighth District Extension Homemakers in North Carolina and was a delegate to that meeting. To the people who know me, the fact that I served as president of the Eight District Homemakers was the biggest farce ever.How did I, who has none of the skills required of a good homemaker,  get to be the district president of the Extension Homemakers? I don’t know the answer to that puzzle. I admit that I don’t know how to cook, can, sew, garden or do other things that most homemakers do so well. My friends always laugh at or about me holding an office in that organization, but I did enjoy the trip to the national meeting.

Then I discovered my husband’s textbooks from Coyne Electrical School in Chicago which he attended in 1947 and 1948.  I couldn’t get rid of those so back into the drawer they went as did the four air mail envelopes which we don’t even use anymore.  Then I found a copy of the 1976 Bicentennial Davie County Enterprise Record, which is a real treasure. It contains  history about most everybody and everything in Davie County. I just had to stop the cleaning and read. I had seen a copy, but I did not know I had one. There it was hiding in that drawer—a treasure. If you haven’t seen that newspaper, go to the library and look it up—it’s interesting. Also there in that drawer was a big book, titled “The Self-study of Farmington Elementary School 1966-1967,” not too valuable in 2020 since there is not even a Farmington Elementary School anymore. I remembered how hard we had to work to produce that document, and I just could not throw it away. Back into the drawer it went.

There was a wooden puzzle of some kind which I will work on when I can no long get out of my chair and a For Sale sign, which I might use if I ever decided to sell my treasures –those items were keepers. An old thermostat went into the wastebasket as did an battery-driven muscle relaxer, which I don’t remember ever using, and several pairs of old  sunglasses, etc.—in fact the waste basket got pretty full.

I found one last thing in that drawer – a clipboard with receipts for all the materials that we used when we built our house in the early 60s. That too I had to keep to study on a rainy day.

Next I moved to the bottom drawer.  It was so full and heavy that I could not open it. I called for help and my wonderful helper, Varonica Godfrey, finally got it open. It just contained newspapers – more newspapers than you can imagine – dating back to the early 60s. I probably could or should have thrown them all away, but couldn’t do that.  Instead, I took them all out and put them around my chair. I was knee-deep in newspapers. My daughter, Frances, came in and said, “Mama, are you a hoarder?”

No, I don’t keep milk cartons, pizza boxes or old tin cans, but I do have to plead to keeping too much stuff.

Now for the newspapers—I had to look at every single one of them and that has taken awhile, days in fact.  I just could not throw those papers out without going through each one.

The first thing that attracted my attention was the size of the paper. The front page of the 1970 Davie County Enterprise Record measured 17 inches from side to side. The 1981 edition was only 14.5 inches wide and the 2020 Enterprise is 11 inches wide.  The size was only one of the things that attracted my attention.  The earlier editions had a great number of pages with columns by different writers and news from many communities around the county. Another thing that really caught my attention was the advertisements. In an 1979 Heffner’s ad Campbell’s tomato soup was advertised at $.10 per can; a package of franks is listed at $.59;   3 jumbo rolls of paper towels for $1; and a 1 lb. bag of coffee $.75.  Ten years later, the Food Town prices advertised a quart of mayonnaise for $.79 and steak at $1.88 per pound.    Last week’s Harris Teeter ad listed NY Strip steak at $6.99 per pound—maybe that was a different steak.  It certainly was a different price. I spent way too much time looking at the ads, but it was fascinating. I also found the announcement concerning the sale of Heffners to Food Lion, but I have lost that clipping so I don’t know the date of the sale.  I guess those days of a can of soup for $.10 are long gone—I paid $1 a can for soup on sale this week.

The ads concerning furniture were also interesting.  A sofa and chair was listed on sale for $288.  You would be lucky to get a foot stool for that now.  The B.C. Moore ads were also unbelievable. Maybe they did not work for B.C. Moore either because that store has disappeared as have all the others that used to be in downtown Mocksville.   One last interesting advertisement—Central Carolina Bank Money Market Certificate rate 15.896% in 1989.

I have clipped, clipped, clipped and filled up a scrapbook with clippings. I have also almost filled up our recycle bin with newspapers.  I hated to get rid of even one newspaper, but the time has come for me to clean out so someone else won’t have to sort through all that stuff when I’m gone.

There were dozens of items I cut out of the newspapers to mail to people who may already have the clipping, but they may have grandchildren who would like to see grandma’s wedding picture or some other such treasure. See what treasures you have hiding in your desk drawer.  By the way, I put almost a drawer full of newspapers back into their old hiding place—those were the ones from which I just could not part.

The drawer is not as full as it was because I can now open it without help.