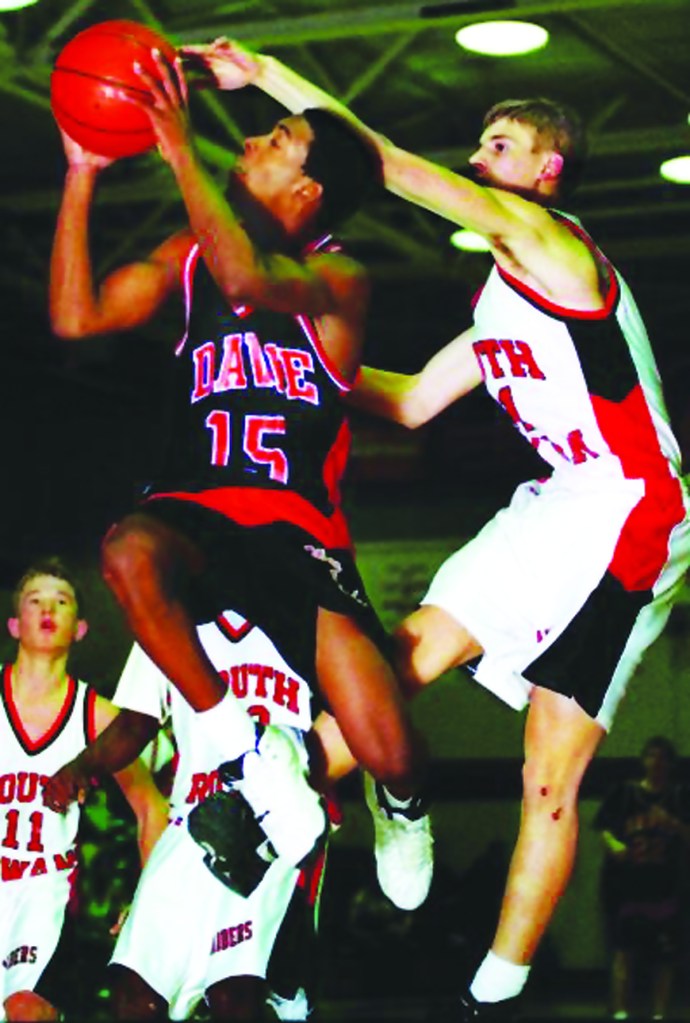 Second in a three-part series on new Davie hall of famer Duane Phillips.

Duane Phillips displayed glimpses as a sophomore, averaging 9.7 points as a gifted but raw varsity point guard. That came on the heels of a 7.5 scoring average as a JV freshman.

But between his sophomore and junior years, Phillips transformed himself from a role player to an incredible star, a quantum leap that saw his average climb nearly 17 points during the 1998-99 Davie boys basketball season.

“This summer I worked on my outside shooting,” Phillips said during his junior year, when he averaged 26.5 points. “Coach (Jim Young) told me how to shoot the ball, bending my knees and stuff.”

Phillips’ cartoonish run of scoring numbers began immediately in 1998-99. Davie drilled North Davidson 77-55 in Welcome in the third game of the season. At halftime, it was North 26, Phillips 24; Davie’s lead was 42-26. Due to foul trouble, Phillips barely played in the second half and finished with 26 to go with six assists and six rebounds.

After a forgettable first half, Phillips scored 15 during a five-minute stretch in the third quarter to power a 76-49 drubbing of East Rowan in Granite Quarry.

“When he gets locked in, he can score inside and outside and it picks everybody up,” Young said then. “He’s got a couple of moves that are Division-I moves. He can finish so well, and as soon as you back off of him, he’ll take it outside.”

Foul trouble was a theme during the first half of Phillips’ junior year. During a 72-69 home win over North Iredell, he exploded for 17 in the first quarter. But fouls restricted his second-half minutes as he settled for 26, matching his career high.

Young, in his second year at Davie, picked up his 400th career win as Davie outlasted North Iredell 84-74 in overtime. Davie pounded visiting East Rowan 92-63 despite a scoreless first half from Phillips, who erupted for 22 after halftime.

“Our biggest problem is getting enough blindfolds to give the guys on the plane because most of them haven’t flown,” Young joked. “They are more scared of that than they are of Reynolds.”

Davie captured the Canterbury Invitational, the 4-A War Eagles squeezing past 5-A Cope Coral 61-59 in the final as Phillips racked up 28 points, five rebounds and four assists. But it was John Orsillo who earned tournament MVP after the 6-7 center compiled 53 points, 28 rebounds and nine blocks across three games.

“The reward was either a steak dinner or a lunch at Hooter’s, and they chose Hooter’s,” Young said with a laugh. “I don’t understand that.”

The Sam Moir Christmas Classic was next. Second-seeded Davie beat South Rowan 71-67 in the semifinals behind Phillips’ 27 as Davie advanced to the championship game in the annual event for the first time in 16 years.

The semifinal results produced a must-see matchup between Phillips and West Rowan’s highly-touted Scooter Sherrill, who went on to play at N.C. State. In front of a packed house at Catawba, Phillips had never looked so golden, scoring 36 points to upstage Sherrill’s 27. But the powerhouse Falcons (10-0 at the time) were the superior team, winning 85-69 to snap Davie’s 10-game winning streak.

The final was deceiving. Davie trailed 67-63 in the fourth. A three-point play by West’s Donte Minter, a 6-7 freshman, broke Davie’s back. It was a valiant effort by a Davie team that was playing without 6-6 starting forward Larry Umberger (dislocated elbow) and reserve guard Dominic Graham (wrist). Orsillo played with fire in his eyes: 15 points, nine rebounds, four blocks and two steals.

“We were tired and thin (in the fourth),” Young said.

Despite the loss, it was a special moment for Phillips, who was born in Spencer. He showed off his breathtaking talent to thousands of fans.

“He’s improved so much over the last year,” Young said. “He’s a true player. He’s an unknown. People don’t realize how good Duane is around (Rowan County), and some coaches have got to start looking because he can flat-out play. If they came out on him, he took it to the hoop. You come out and now he’s making a layup.”

“Some of my family came and watched me for the first time,” Phillips said. “I was feeling hyped. I wanted to show them that I could play since they can’t come to see me (at Davie) because it’s too far. Just playing against (Sherrill) is a pleasure because everybody talks about him. That let me know that I could play against anybody and I could score against anybody.”

Fouls kept Phillips on the bench for the whole second quarter in the final nonconference game against visiting North Davidson, but that didn’t stop him from scoring 23 in a 74-63 victory.

Kenny Collins was a point guard with freakish speed and quickness. He was like the kid on the playground that nobody could catch, and he was equally brilliant against N. Davidson with 24 points, six assists, four rebounds and three steals. Orsillo was another major factor with 14 points, seven rebounds, four assists, two steals and two blocks.

Now it was time for league play. Navigating the Central Piedmont Conference in those days felt like stepping around a rattlesnake. Reynolds blitzed host Davie 93-70, but Phillips was dauntless with 37 points.

“I said this to my coaches: ‘Duane is a player but he has not seen the defensive pressure that these guys can put on him. We will see what he’s made of,’” Young said. “Does (37 points) tell you anything? I knew it and I felt confident he could do it, but we had some doubters and this proves it to the college coaches and other people that this kid can flat-out play.”

“Duane is awesome,” said backup forward Travis Peacock, who sealed it with two free throws with :29 left. “It’s just fun to be around him and watch him play. He lifts the team with big shots all the time and keeps doing it game after game.”

Phillips was whistled for three first-quarter fouls in an eventual 89-82 home loss to Mt. Tabor. Young had no choice but to leave Phillips on the floor with two fouls because Orsillo, Umberger and Lassiter were also in foul trouble. Phillips still had 23. Collins (13 points, 12 assists), Graham (14 points), Orsillo (10 points, 11 rebounds) and Lassiter (10 points) kept Davie in contention.

“I’m as pleased as I can be with a loss,” Young said. “We could have easily rolled over and been blown out.”

“He has a couple more moves that you haven’t seen that pops out of him,” Young said. “He can just stop, hold himself up there and go around you. Those were like Michael Jordan moves.”

The Robin to Davie’s Batman was Collins, who handed out 17 assists.

“That’s got to be some kind of record (for assists),” Young said. “That’s unbelievable.”

“(Collins) is the man,” Phillips said. “He can get the right angle to give me the ball. I wouldn’t have had (43) if it wasn’t for (Collins) and some of my other teammates who are so unselfish. They knew I was scoring and had the hot hand. I appreciate that.”

Reynolds, Tabor and West Forsyth were all imposing teams. West stuck to Phillips like bubble gym on a shoe and held him to a season-low 14 in a 96-84 Titan road win. Although Collins scored 21, West’s twin towers (Josh Shehan and J.K. Edwards) combined for 59.

After Davie put up little resistance in an 81-56 loss at Tabor, the banged-up War Eagles stumbled at last-place South Rowan, 69-67. Davie won the first two meetings by four and 15, but this time it was missing Peacock (broken jaw), Lassiter (broken nose) and Umberger (broken nose).

With the game tied, Dixon snatched a defensive board, took off to the other end and sank a 15-footer at :02 to give him 26 points. It spoiled a magnificent 38-point effort by Phillips, who drained three triples in a span of 75 seconds to give Davie a 63-61 lead. Then Phillips’ two free throws tied it at 67. He made 12 of 24 field goals and 8 of 11 foul shots. Collins had 10 points, 11 assists and five steals.

The War Eagles finished fourth out of six in the roughest conference in the state.

In the first round of the CPC Tournament, Phillips tormented No. 5 South Stokes once more, scoring 37 on 12-of-19 shooting as Davie advanced 72-64.

“We needed to bounce back (from a three-game losing streak),” Young said. “We’ve had some injuries and some discipline problems. We just needed to step back and regroup.”

The War Eagles had to win the tournament to steal one of three playoff berths, but they had no chance in an 89-58 loss to No. 1 Reynolds in the semifinals. The Demons cruised to 22-2.

“They’re as deep a club as I’ve seen, and it says something for coach (Howard) West to be that deep and keep them happy,” Young said.

The War Eagles failed to make the playoffs for a second straight year, but what amazing entertainment they provided at 15-10 – just the second winning season in 11 years and the fourth-most wins in program history at the time.

Phillips, the only all-conference selection from Davie, achieved the third-highest average in program history (26.5). The only person above him is Grant, who averaged 28.5 as a junior and 28.8 as a senior.

And get this: He did greater damage against the tougher competition, averaging 23.9 in 13 nonconference games and 29.2 in 12 CPC games.

“Duane’s come a ton from a shy little sophomore who was dealing with all the seniors to taking control this year,” Young said. “His real scoring didn’t start until we got against the good competition.”

Davie only graduated one starter in 1998-99. That was Collins, who had a fabulous season with 10.9 points, 8.3 assists and 2.5 steals. With Phillips, Graham, Orsillo, Lassiter and Umberger returning the next year, everything was set up for a big run in 1999-00.