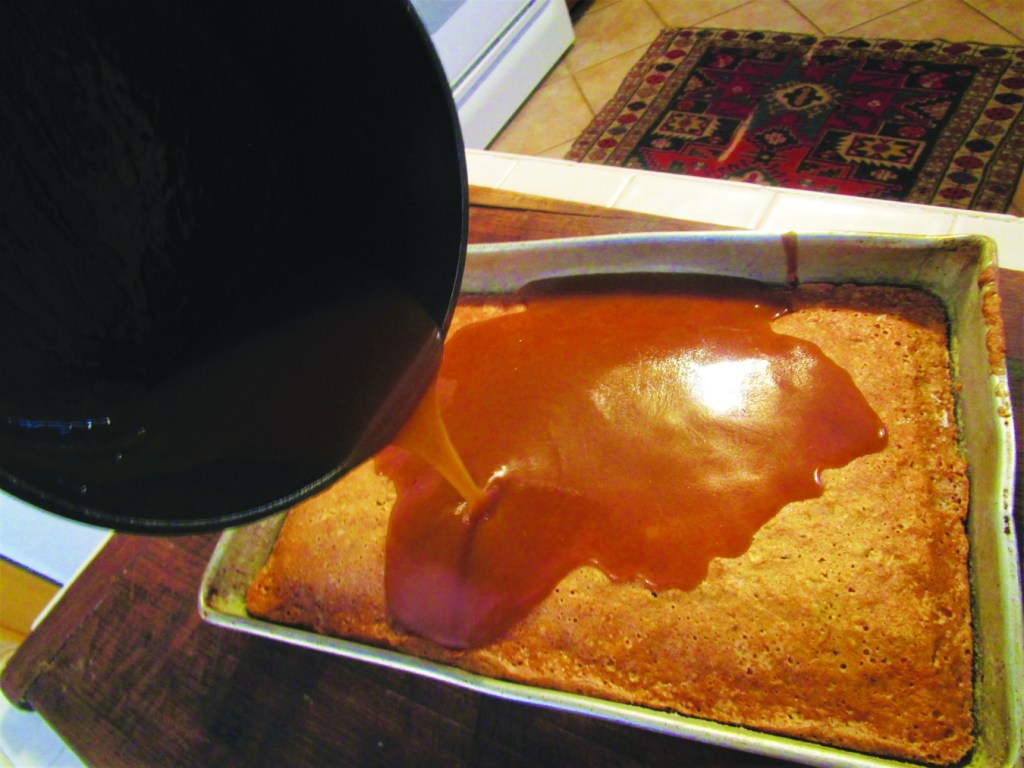 Drizzle warm butterscotch over the Apple Cake while hot out of the oven.

Butterscotch is long overdue a little time in the limelight.

Recently, the host at a moonshine tasting said he injects his beef roasts with butterscotch moonshine – yielding a delicious result. I added the liquor in my favorite pound cake, substituting milk with the flavored moonshine. Yes, the cake was moist and delicious – and decadent.

Whether you love an understated or more intense butterscotch flavor, both are included in today’s classic butterscotch recipes. Try substituting sea salt for regular salt and adding a little bourbon, which takes butterscotch from better to best.

Any time you substitute real cream for milk, you’re doing your desserts a favor – taking taste a notch upward – as well as your belt. Tell yourself it’s ok for special occasions – go decadent or leave your desserts at home.

In a saucepan, combine egg yolks, butter, milk, and salt. Add flour, white sugar, and brown sugar. Over medium heat, stir constantly for 15 minutes or until thickened. Cool. Add vanilla. Pour into pie shell. For meringue, beat egg whites and sugar together until stiff. Spread over pie. Cook in a 350-degree oven for 15-20 minutes.

In a mixer, cream butter, Crisco, and sugar together. Add eggs one at a time and mix well. Add sifted flour, salt, and baking powder while alternating with milk and vanilla. Mix well. Fold in chopped nuts. Bake in a greased and floured tube pan in a 300-degree oven for 1 hour 20 minutes or until tests done.  Ice with frosting.

In a saucepan, melt butter. Add sugar and heat until dissolved. Add salt and milk. Bring to a boil for 3 minutes. Stir in vanilla. Pour over a warm cake.

In a mixer, cream butter, shortening, and sugars. Add eggs one at a time and mix well in between. Melt morsels and add to sugar mixture. Add flour, baking powder, and salt while alternating with milk and flavorings. Bake in a greased and floured tube pan in a 325-degree oven for 1 hour and 20 minutes or until cake tests done. Make glaze and spread over cake.

In a bowl, combine flour, butter, and ½ cup nuts. For the crust, press mixture into bottom of a 9 x13 pan. Bake in a 300-degree oven for 15 minutes to set. Cool completely. In a bowl, combine cream cheese and powdered sugar.  Mix well. Fold in 1 cup of Cool Whip. Spread on baked and cooled crust. In a bowl, mix pudding with milk and spread over cream cheese mixture. Top with remaining carton of Cool Whip. Sprinkle with ½ cup toasted almonds. Refrigerate. Chocolate pudding can be substituted.

In a mixer, beat eggs. Add sugar and oil. Mix well. Sift flour, salt, soda, and cinnamon. Combine with sugar mixture. Mix well. Fold in apples and nuts. Bake in a greased and floured 9 x 11 baking pan in a 325-degree oven for 25-30 minutes or until done. While hot, pour butterscotch top over the cake. You can also make this in a Bundt pan.

In a saucepan, melt butter. Add brown sugar and flour and stir until dissolved. Add milk and cinnamon and mix well. Bring to a boil for 3 minutes. While hot, pour over warm cake. Good drizzled over ice cream, too.

In a saucepan, combine sugar, evaporated milk, butterscotch morsels, water, and cornstarch. Add beaten egg yolk. Cook over medium heat while stirring until thickened. Remove from heat. Add butter, coconut, and pecans. Cool. Spread between cake layers and on top to within ½-inch of outer edge. Frost sides and top edge with whipped cream or a frosting.