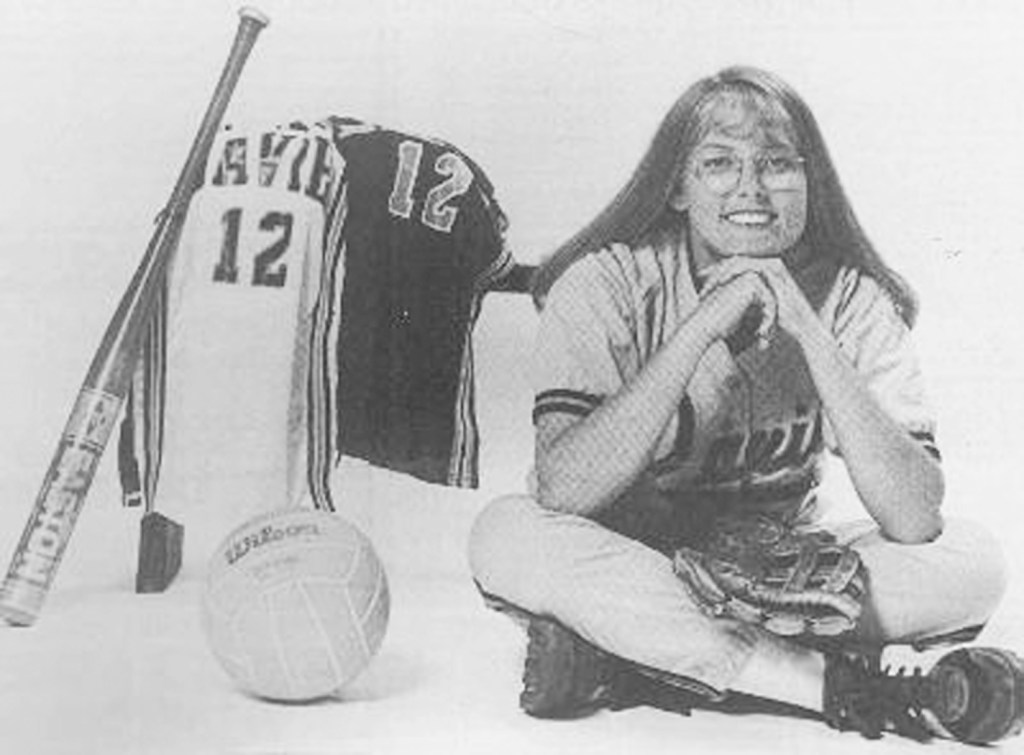 Third in a three-part series on new hall of famer Jonette Williard Poole.

Jonette Williard Poole was excellent at three sports, but she was a marvel at softball. There was always an effortless style about her. Take a Davie playoff win her junior year in 1995.

“In the third or fourth inning, I was going up to bat and my glasses broke,” Poole said last week. “I went to the plate basically blind. I took the first pitch so I could determine if I could see anything. I swung at the second pitch and somehow got on base. I told coach (Bill) Meadows they would have to scream at me running the bases because I couldn’t see hand motions. Luckily, my glasses were fixed by the time we went back in the field.”

“I watched her play, and with the kind of athlete she is, I knew she’d pick it up,” Cardinals coach Ray Chandler said then.

Setter Laura Moyer said: “It’s the most incredible high I’ve had in my life.”

Reynolds coach George Folger: “When I saw that (outcome), I knew they were for real.”

“Davie has a great team,” Folger said. “They probably deserved to win this match. I really don’t know how we pulled it off.”

In the rematch in Winston-Salem, Davie fell short in another five-set battle with Reynolds. But Davie overtook West Forsyth in five sets to seize second place in the CPC at 10-2.

The CPC got two state playoff berths. The only way Davie wouldn’t make the playoffs was if a third or lower seed won the tournament. In the semifinals, the No. 3 Titans buried Davie in three sets. In the final, West pulled another upset, beating Reynolds in four sets and stealing the second playoff berth from Davie.

A giddy, 16-3 year ended prematurely for the War Eagles.

“It was like the entire season was for nothing,” Davie’s first-year coach, Tammy Reavis, said. “We were really disappointed. They had worked so hard.”

Seniors Williard, Moyer and Kristi Armstrong were named to the all-conference team. It was the second selections for Moyer and Williard, who averaged a team-high eight kills.

Williard won tournament MVP. Ramsey and Steele made the all-tournament team. “It’s a big honor, but you go and play to win, not to win MVP,” Williard said. “We played good as a team.”

But the War Eagles hit peak form when it mattered most, winning seven of eight down the stretch. (The exception was a nonconference loss to North Iredell.) Most of the wins during the 7-1 surge were filled with tension and emotion.

There was a must-win game against visiting Mt. Tabor, which was 17-4 and held a 41-36 lead in the fourth quarter. When it was 41-41, Brill, the center, fouled out. Davie dug deep, scored 19 of the final 26 points and prevailed 60-51. Point guard Williard and Ramsey, who formed one of the finest backcourts ever, had 16 points each. Moyer had nine, Steele eight and Brill seven. The comeback forced a three-way tie for second.

“I really like to see our seniors go out like that,” Dinkins said. “We stepped up and played a super game. The seniors did what they were supposed to do.”

In the final regular-season game, a 62-50 win at North Davidson gave Davie second place at 8-4. Davie faced a 25-20 halftime deficit.

“(Dinkins) blessed us out at halftime and we came back and did the job,” Williard said.

Williard engineered the rally, ripping off a personal 9-0 run to turn a four-point deficit into a five-point lead in a span of – wait for it – two minutes. She finished with 23 points on 10-of-15 shooting.

“Tami said I was in the zone,” Williard said. “I didn’t know what it meant, but I know now.”

“We could not have played a better second half,” Dinkins said.

In the CPC Tournament semifinals, Davie had another fierce battle with Tabor, winning 51-48 after trailing 44-41 with 3:10 left. Steele’s triple tied it at 46. Williard’s free throws tied it at 48 at 1:27. Davie got possession and milked some clock. Williard decided to let a 22-footer fly at :35, and it swished to give Davie the win. Brill (15 points, six rebounds), Williard (11 points, five rebounds), Ramsey (10 points, seven rebounds) and Steele (nine points) were the keys.

The CPC championship was hosted by Reynolds. The second-place finish in the regular season marked a step backward for the War Eagles – they were the two-time defending champs – but they atoned by claiming the tournament for the third year in a row. It was not a small achievement; No. 1 West Forsyth was 21-3 with a 13-game winning streak against CPC opponents and had defeated Davie twice that year.

Davie suffocated junior center Laquanda Barksdale with a packed-in zone, holding the UNC commitment to nine points and rallying for a 44-33 win.

Down 29-26, Williard hit two free throws and Ramsey buried a 19-footer to give Davie a 30-29 lead it would not relinquish. At desperation time, West repeatedly fouled Steed, who hit six straight free throws in a span of 38 seconds to salt it away. Ramsey (15 points, eight rebounds) and Williard (10 points, nine rebounds) did the heavy lifting.

Williard: “We wanted it more. Now we get to shave Dinkins’ head.”

Dinkins: “We knocked the big dog off the porch.”

In the first round of the 4-A playoffs, Ramsey was dominant in a 48-40 home win over Jordan, piling up 20 points and 12 boards.

In the second round on the road, Davie avenged a regional loss from the year before to North Forsyth, edging the Vikings 40-38. The War Eagles trailed 36-33 with 2:15 to go before Ramsey hit two free throws. Williard got a steal at the other end and found Ramsey, who nailed a 3 for a 38-36 lead. Ramsey scored for a 40-38 lead, North missed two free throws at :11 and Davie knocked off a 20-win opponent. Williard produced 13 points and eight rebounds. Ramsey (11 points) joined historic company as the seventh female with 1,000 career points. Brill contributed eight points, five boards and three assists.

“If you didn’t like that game, then you don’t like basketball,” Dinkins said. “Both teams made big plays.”

In the sectional finals in Durham, Davie ran into a buzzsaw, losing 84-56 to the Hillside Hornets, who were ranked second in the state and improved to 23-2.

The 28-point loss, though, could not erase the euphoria from a 19-9 season.

“Unbelievable,” Dinkins said. “We accomplished so much. We jelled and peaked at the right time.”

Williard poured in 403 senior points, averaged 14.3 per game and made all-conference in basketball for the first time. She was the No. 3 scorer in the CPC. Ramsey, who was next at 13.9, made the team for the third time.

Williard made her senior softball debut in the second game of the 1996 season at West Iredell, running from the court to the field with no practice and banging out three hits.

In the CPC Tournament, Davie stomped South Stokes (18-4) and South Rowan (10-0). In the championship game at North Davidson, the unbeaten Black Knights stopped No. 3 Davie 7-5. It was a familiar ending as North (22-0) beat Davie in the title game for the third year running.

With only 31 schools in the state still playing slow-pitch, the 3-A and 4-A playoff qualifiers were put in the same bracket. In the first round at home, Davie blanked Wilkes Central 5-0. Williard, Bell and Amanda Hendrix all went 2 for 3 as Davie racked up 15 hits.

In the second round at Hickory, Davie faced the top seed from the Western Piedmont 3-A Conference but raced to an 8-1 lead through five innings. The charge included an inside-the-park homer from Williard, who rocketed one down the first-base line.

When it seemed all but wrapped up, a major collapse came.  The Red Tornadoes scored six times in the sixth to close within 8-7. In the bottom of the seventh, three straight singles tied it at 8 and a sac fly handed Davie a 9-8 loss. Bell, Keisha Wagner and Tania Dillard all had three hits in defeat. Williard, Janis Barney and Hendrix had two apiece.

“We were dead in the water,” Hickory coach John Worley said. “It’s happened to us. Anything can happen in slow-pitch softball.”

“It’ll be a while before I have a bunch like those three,” Steele said after Davie finished 17-8.

Williard and Bell were named all-conference for the fourth time and Barney for the third time. Sophomore left fielder Richie also made it.

She was a monster talent with a miniscule ego.

“Whether it’s on the field or the court, she lets her game talk,” said Carol Cozart, who coached Williard in basketball at North Davie. “I can go up to her and say: ‘Jonette, how did you do?’ She would say: ‘OK, but we won and that’s what matters.’ She might score 25 points and she’d say: ‘I did OK.’ If she ever says, ‘I did OK,’ then you know she really did well.”

“Jonette’s a coach’s dream,” Steele said. “She’s like one in a million. They only come around ever so often. She is dedicated. She’s a gift.”

She was also utterly dedicated to her academics. “I study, then play ball,” she said. “It’s really hard, but I’ve got to make the grades. That comes first.”

“Jonette studies all the time – on the bus, in the car, wherever we’re going,” her mother Luane said. “On weekends, she could have gone to the beach or skiing. She would like to do those things, but she’s so committed to her teams.”

Williard was recruited by Western Carolina in volleyball and by Catawba and UNC-Charlotte in softball. But she called it a career, turning down those offers to attend N.C. State.

“You always wonder what could have been if you had gone and played, but I’m pretty happy with the way it turned out,” Jonette said recently.

After attending N.C. State, she earned a bachelor’s degree at Tarleton State University and a master’s in education from Liberty. She met husband Matthew at a softball tournament. They lived in Texas for a while. When Matthew got out of the military, they lived in Statesville and then Mocksville. Jonette was a teacher at Davie for seven years and was an assistant coach in volleyball and softball for one year. Matthew rejoined the military as a signal officer, and they’ve lived in Texas, Georgia, Alaska and California. They currently live in Fort Leonard Wood, Mo. Jonette works for the U.S. Department of the Army.

“We’re scheduled to move next summer,” she said. “We won’t find out where until February.”

Matthew and Jonette have three athletic children. The boys – Hunter, a high school senior, and Houston, an eighth grader – play basketball and baseball. The daughter, Hayden, is a sophomore who plays volleyball and softball. Johnny and Luane Williard still live on Ben Anderson Road in Mocksville.

“If I told you what my schedule is tomorrow (on a Saturday), you’d be like: ‘What in the world?’” she said.

“Matthew said we were coming (to HOF Night),” Jonette said. “I don’t know if all the kids will get to come, but we’ll definitely make it.”