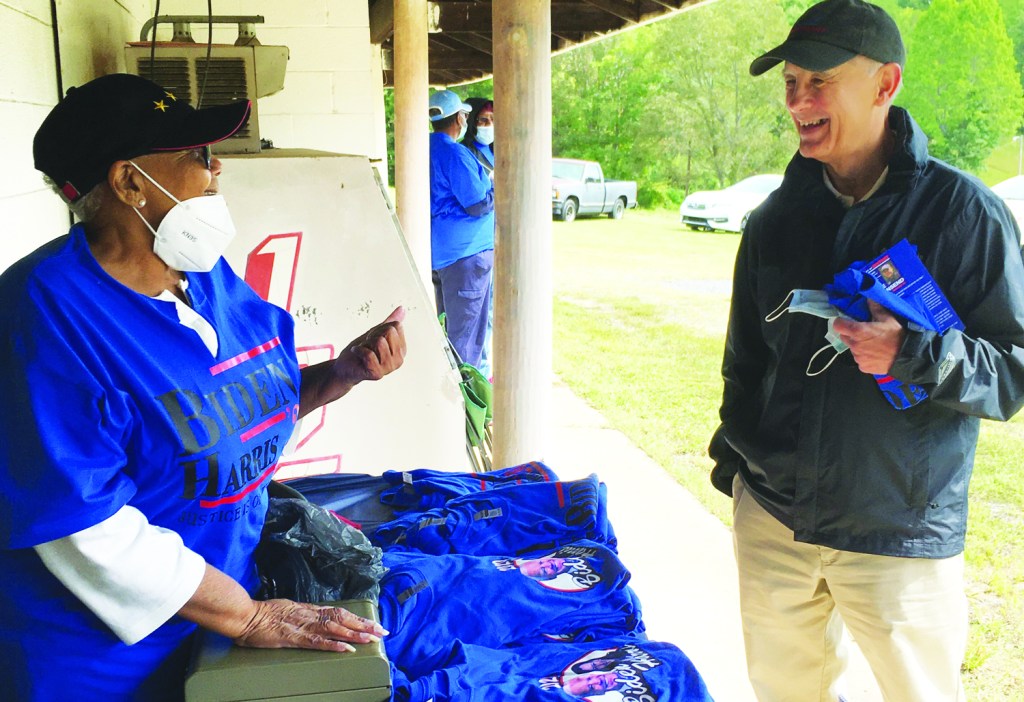 Small community businesses, some of which have been hard hit by the COVID 19 pandemic, set up their wares at Masonic Picnic Grounds from 11 a.m.-2 p.m.  Other  vendors participated by contributing items for door prizes.  Dr. Erma Jefferies, chair of the Davie County Democratic Party, said she appreciates all who worked  to make the event a success.

At noon, Jefferies called upon Keith Townsend, Democratic candidate for the 77th NC Congressional seat to lead the group in a tribute to US Supreme Court Justice Ruth Bader Ginsburg. After a brief summary of Justice Ginsburg’s history of serving on the U.S. Supreme Court, fighting for equal rights and justice for all, and her long struggle with cancer, Townsend asked for a moment of silence to remember Justice Ginsburg and her family.

There was a steady flow of people throughout the day. All wore masks and practiced social distancing while buying Biden/Harris signs, and t-shirts. Many purchased raffle tickets for prizes which were donated by party members and vendors.

The kitchen of the shelter was abuzz with Democratics filling brown bags with free hotdogs, chips, condiments, a cupcake, and a drink for those who attended.

Because of the pandemic, getting to know candidates has been difficult for many people this election cycle.  The community awareness event provided Davie residents an opportunity to meet two of their Democratic candidates: Townsend, a retired high school history teacher from Rowan County; and Scott Huffman, a computer technology company owner from Charlotte.

Townsend said he is for Medicaid Expansion, allowing more than 500,000 North Carolinians to have access to healthcare.  “Many of those uninsured people live in this county.  Being an educator, I understand the detrimental effects on public education which is not being properly funded by the present NC Legislature.  My opponent’s record indicates that she has never been an advocate for public education and she voted against Medicaid Expansion.”

Huffman is the Democratic Candidate for the 13th US Congressional District. He has visited Mocksville several times since announcing his candidacy. The first visit was the candidate forum held at the Senior Center in February. The incumbent did not attend.  Several Democratic Party Members met in March at Rich Park, where Huffman provided a barbecue meal.  He has made several visits to Democratic Headquarters at 67 Court Square in Mocksville, bringing hand sanitizers, masks, and other needed items.

Huffman is a Navy veteran. “I don’t want and expect people to vote for me because of my service to our country, I want people to vote for me because I will represent them and work for them in a way my opponent has not. I will listen to my constituents and communicate with them in more ways than just telephone town hall conference calls, where questions are screened to eliminate dialogue on controversial issues.”

After thanking everyone for their participation, Jefferies concluded by saying: “We are working hard to make everyone in Davie County aware of the importance of voting in this election.”