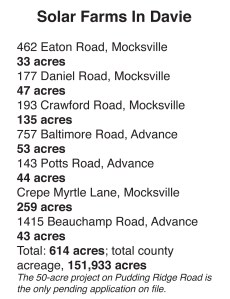 How many solar farms are too many?

It’s a question Davie County Commissioners and their counterparts across the state are dealing with, but first, they must decide on the latest application.

Perendale Holdings and Birdseye Renewable Energy had applied to rezone 50 acres off Pudding Ridge Road from residential-agricultural to a special conditions district for a solar farm.

Landon Abernathy, director of development for Birdseye, said the plan is to work with EnergyUnited, which owns a nearby substation, to buy the electricity produced by the solar farm.

“By far, this was the most appropriate location for a solar project. We could do a really nice job of getting the project in here,” Abernathy said. “It’s quiet, safe, low to the ground with little traffic. We feel like we’re a quiet, passive use that fits in well with agricultural and residential uses without negative impact.”

“I’m in favor of it,” said neighboring property owner Wayne Webb. “As the county manager is well aware, there is no way you could build a house on this property (because the soil won’t accept a septic system). Rooftops don’t pay your taxes. They pay taxes, but they don’t support themselves. This farm would pay more money for this county. You cannot see it. Pudding Ridge will tell you they can see it, but honestly, they can’t.”

Webb’s son is building a house adjacent to the site.

Amy Backus and others in the Pudding Ridge neighborhood disagreed with Webb, saying the site could be seen from some of the homes.

“It isn’t completely sheilded from view. We don’t want to look at it. We don’t want to drive by it every day,” she said. “You will see it from Farmington Road, Puding Ridge Road, Cornwallis Drive … and when you get to higher levels above the ridge, you’ll see it from there, too. It’s simply not true that you will not be able to see it.

“People moved up there because it’s peaceful and quiet, and we like the views. they like what they see. We’re the ones who will have to live with it.”

Board members were presented with views from the homeowners and the developers. It would be beyond the golf course from the neighborhood, and beyond two tree lines.

The request was unanimously recommended by the county’s planning board, with as Backus put it, no discussion.

“I’m not saying we shouldn’t have solar, but plan for it carefully,” she said.

Benita Finney first made a motion to deny the rezoning request, with Mark Jones offering the second.

Board member James Blakley said he still had unanswered questions, but didn’t mention those questions or ask them at the meeting.

Board Chair Terry Renegar said he is concerned that the county’s comprehensive land plan is silent on the subject of solar farms. “Do we want any more in Davie County, period? Maybe we want to put a moratorium. These things, the speed at which they’re coming in, maybe we haven’t thought of everything. I’m not convinced the constituents want this any more in Davie County.”

Board member Richard Poindexter said he wanted to check out which sides’ claims are more valid.

Finney and Jones withdrew the original motion. “If it’s going to be in the best interest of everybody, I’ll make a motion to defer.” It passed unanimously.

Jones said if “green rollback” money goes away, so will new solar farms.

Planner Andrew Meadwell said that even if the county adopts a moratorium, all applications on file before that moratorium will have to be decided by the board, including the one just deferred.