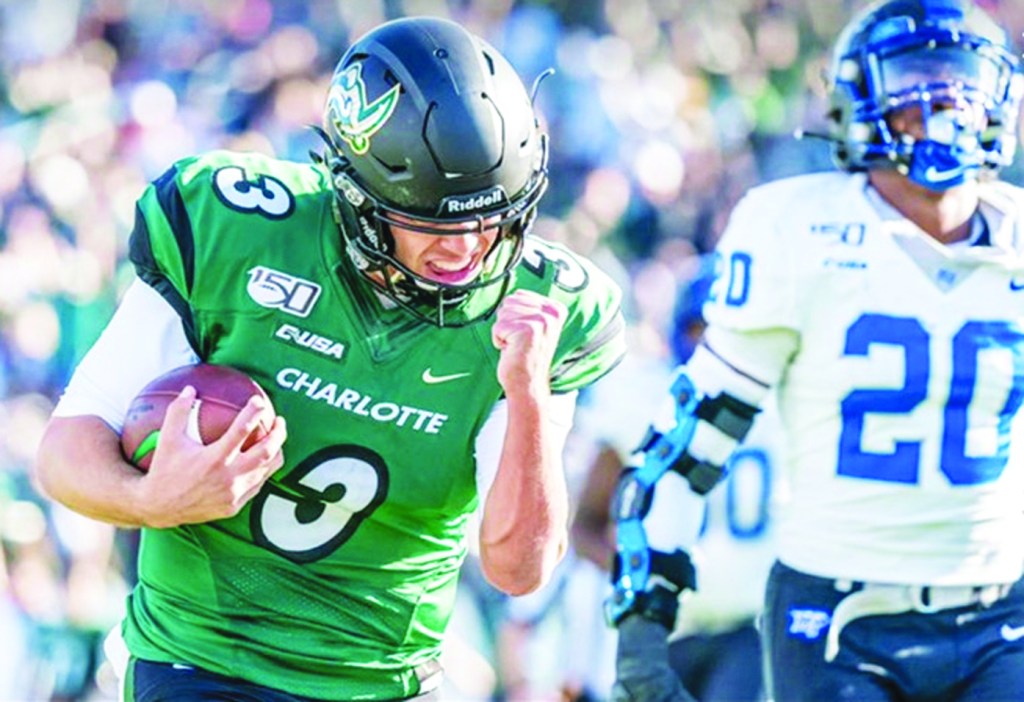 In 2019 when the Charlotte 49ers made program history with a winning record (7-6) and enjoyed their first bowl game experience in the Bahamas, quarterback Chris Reynolds completed 181 of 291 passes, a .621 completion percentage.

Only twice last season did he not complete better than 50 percent. One came against defending national champion Clemson, when Reynolds was 6 of 16. The other came in rainy, miserable conditions against Marshall when Reynolds went 9 of 21. The Niners prevailed in that one, 24-13, to become bowl-eligible.

Something weird happened in Charlotte’s 2020 opener against Appalachian State on Sept. 12. Reynolds went 11 of 30 for 140 yards in a 35-20 loss in Boone. He was intercepted twice and did not throw a touchdown.

There seemed no way Reynolds would ever go 11 of 30 unless there were unusual circumstances – like facing a Clemson or playing in lousy conditions. Appalachian State is a formidable team, yes. The Mountaineers were nationally ranked at the time and 17-point favorites over Charlotte. But last year Reynolds carved up the Mountaineers’ secondary, going 20 of 31 for 296 yards and four TDs in a 56-41 ASU win.

Well, there turned out to be a reason for Reynolds’ .366 completion rate in Boone. He was hurt. He got hurt the first play of the game. He never came out, playing through sharp pain. Even though he was dealing with an upper-body injury, the Niners were in contention until late in the fourth quarter.

Hearts dropped when the news broke early last week. Reynolds is out indefinitely.

“Obviously he wants to play,” said coach Will Healy, who didn’t find out his redshirt junior QB was injured until the day after the game. “He’s a competitor. He showed it (at App). He’s one of the toughest I have ever been around.”

The 49ers were supposed to visit Chapel Hill to take on the 12th-ranked Tar Heels on Sept. 19, but the game was cancelled after several Charlotte offensive linemen tested positive for coronavirus.

Reynolds, who absorbed 17 hits against App, would not have played in the North Carolina game, but he could be back for Charlotte’s home opener this Saturday against Georgia State. Then again, he could be out several weeks. He could be out the rest of the season.

“Right now the best rehab is just to rest it and ice it nonstop,” his father, Dan Reynolds, said. “Christopher is beside himself right now because he wants to play. He could play throughout the season and be fine. It could be much worse. It could be an ankle again or knee. He’ll get through it.”