Hall of Famer excelled in 3 sports 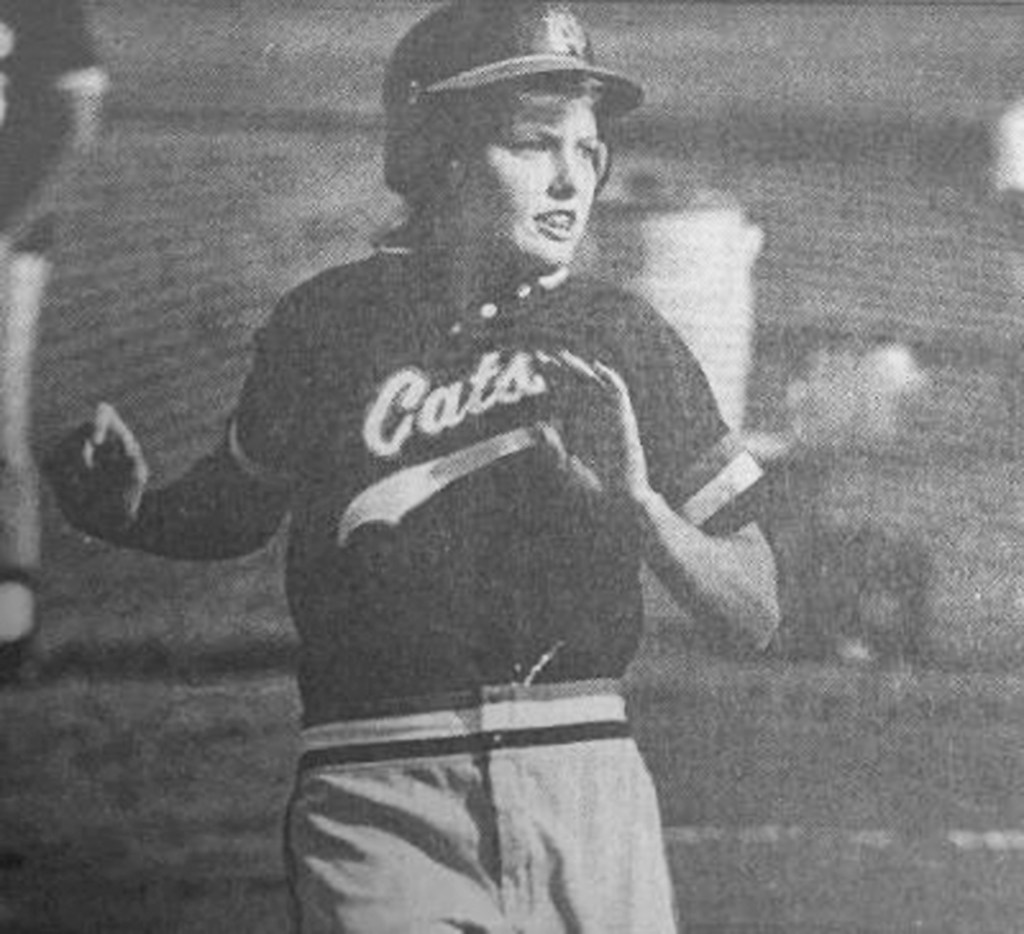 First in a series on new hall of famer Jonette Williard Poole.

One reason Jonette Williard Poole will be inducted in the Davie High Athletic Hall of Fame in 2021 is she could do absolutely everything.

She played softball, basketball and volleyball, and she excelled at all three. When she was at North Davie, she could have squeezed in a fourth sport (track & field). She probably would have starred in that, too, if she’d wanted.

“I never thought anything about (track),” she said last week from her home in Fort Leonard Wood, Mo.

The 1991-92 school year was one for the ages for North Davie sports. Williard was an eighth grader who dominated freshman leagues (this was the final year of freshmen competing at the junior highs). North’s slow-pitch softball team captured the North Piedmont Conference championship. North’s girls basketball team won the regular-season championship. And North’s volleyball team achieved a perfect season. The three teams combined for a 33-3 record.

The North softball team endured an early-season loss at Chestnut Grove. In a late-season rematch at North, the Wildcats turned up the amp to 11, sweeping the doubleheader by scores of 13-0 and 20-1.

The season ended with a blockbuster matchup. A big crowd gathered as North Davie (9-1) met South Davie (8-2) with the conference title on the line.

In the first inning of game one, Willard singled and scored on the second error of the inning. A. Barney’s two-run homer in the third bumped the North lead to 3-0. The Tigers fought back in the third, when Beth Wall doubled and Holly Snider, Tish Redmon and Keisha Wagner had singles to force a 3-3 tie. North regained control in the fourth as Bell singled and Cassidy homered for a 5-3 lead. South rallied again in the fifth. Trinity Bartha and Audrey Brannon had singles before an error tied things at 5.

Williard’s teams won three championships in 1991-92 because there was no shortage of weapons around her. In the sixth inning, Ramsey’s solo homer ultimately gave the Wildcats a 6-5 win and a second straight NPC title.

South coach Grimes Parker said then: “If we had gotten a run or two up, we might have won it. But North has a real good team.”

With the title in the bag, North won a meaningless game two over South, 6-4. South finished 8-4, with all four losses to North.

When the doubleheader was over, North assistant coach Grady Barney, who looked like a member of the rock band ZZ Top, held up his end of a bet. After the loss to Chestnut Grove in the second week of the season, Barney told the girls if they won the championship they could shave off his beard.

“They did it right after the game behind one of the buses,” Barney said then. “(Daughter Amy) didn’t want me to shave it off. But I took some clippers and a mustache trimmer and let them whack away. They had a ball. When I went to work the next day, I felt half-naked. And I about froze. I probably hadn’t shaved in five years.”

The Wildcats outscored opponents 138-34 on the way to 11-1. The co-MVPs for the team were Williard and Stewart.

The season actually opened with a narrow nonconference loss, 55-54 to Woodward. North committed 24 turnovers and got outrebounded 40-26. Williard’s 25 points were not enough.

The Wildcats, though, would win the next 12 games. They tore through visiting South Davie, 62-47, as Williard poured in a game-high 25 points to go with eight assists. She banked in a halfcourt shot at the end of the third quarter. Williard had a titanic teammate in 6-2 freshman Maria Newsome, who was inducted in the HOF in 2016. She went off for 22 points, 18 rebounds and four blocked shots against South. Elizabeth Greene had 18 points in defeat.

In a 54-31 rout over Southeastern Stokes, Williard had 25 points in – get ready for this – 18 minutes. Cassidy had 13 points and seven rebounds.

Williard put up 24 points in 20 minutes against Chestnut Grove. Newsome had 12 points and 16 rebounds.

Williard got into foul trouble during a 51-32 cruise past West Alexander. She had 20 points – get ready for it – in 12 minutes of action. Newsome produced 11 points and 15 boards.

When the Wildcats punished West Alexander 76-34, Williard put together a 37-point masterpiece, breaking the program record of 31 by Andrea Gentry. It’s a record that still stands. She accounted for 21 of North’s 25 points … in the first quarter. Newsome compiled 12 points, 15 rebounds and five blocks.

In a 47-24 stomping of South Rowan, Williard outscored South by herself with 26 points. She also had six rebounds and five steals. Newsome tallied 10 points, 12 boards and eight blocks.

In the next meeting with S. Rowan, Williard faced constant double-teams during a 61-30 blowout. Although the defensive game plan worked in holding Williard to eight points, she was still a major factor with eight assists. Newsome had 20 points and 16 rebounds. Cassidy hauled down 10 boards.

North broke the school record for points in a 77-34 mauling of Southeastern Stokes. Williard scored 30. Newsome had 24 points and 19 boards.

A 62-29 decision over Chestnut Grove was a typical North win. Williard had 22 points at halftime, when it was 42-16, and didn’t play in the second half as coach Ricky Hendrix called off the dogs.

When North visited South Davie, Williard didn’t score in the first quarter. She still finished with 31 in 20 minutes of playing time as North clinched the regular-season title with an emphatic 71-51 decision. Newsome had 14 points and 17 rebounds. Cassidy piled up 15 points and 12 rebounds.

“Jonette was unstoppable,” Hendrix said. “And the really good part is, she’s just an eighth grader playing in a freshman league.”

Amanda Sigmon scored 19 in defeat. After the second blowout loss to North, South coach Jerry Callison said: “If we play them again, we’ll try something different.”

Before the NPC Tournament, North closed the regular season with an anticipated rematch with Woodward. The Wildcats had no trouble settling a score, leading by as many as 26 and winning 72-55. Williard went 7-for-7 from the foul line to score 25. Newsome achieved a triple-double (21 points, 20 rebounds, 10 blocks). Cassidy contributed 13 points, eight boards and four blocks.

In the regular season, the Wildcats won by an average score of 61-36.

In the semifinals of the tournament, North took a 28-18 lead over Chestnut Grove into the locker room. When the third quarter began, Trojans coach Gerald Jones ordered his team to stand near halfcourt and hold the ball. Content with a double-figure lead, Hendrix told his girls to drop back into a zone and wait. Neither team scored in the third. Jones had to pick up the pace in the fourth and North cruised 43-28.

“It was a simple point of shortening the game,” Jones said. “They had blown us out by 30 twice. I felt if I could go into the fourth quarter down only eight or 10, we’d be in good shape.”

Although she was hampered by a stomach virus, Williard still led all scorers with 14 points. Newsome (13 points, 15 rebounds) and Cassidy (seven points, 10 rebounds) controlled the inside.

When the Wildcats reached the championship game, they had steamrolled 12 straight opponents. Their opponent, South Davie, came in with a Grand Canyon-sized chip on its shoulder. South lost the regular-season meetings by 15 and 20 points.

But the Tigers pulled off a legendary upset, 64-61. Eighth graders Wagner and Carrie Brill came up from the seventh/eighth team for the tournament and helped South produce improbable lightning.

“We couldn’t have done it without them,” Callison said. “They kept Maria off the boards and she didn’t get as many putbacks.”

“They were hugging and jumping all over each other,” Callison said of the postgame celebration. “They enjoyed themselves and I’m real pleased.”

On the other side, North traced the loss to 18-of-34 foul shooting. “You can’t win against a hungry team if you miss 16 foul shots,” Hendrix said.

Williard scored 18 in North’s first loss on its home floor since January 1990. In the teary-eyed locker room, Hendrix reminded his girls of the glorious journey, a 12-2 record. Williard averaged an eye-popping 25.3 points, the county standard for females. Hendrix gave co-MVP awards to Williard and Newsome.

“We had a great season and I’m extremely proud of our accomplishments,” he said. “But today, South Davie wanted it more than we did.”

After running roughshod over opponents in softball and basketball, it was time for volleyball. North and South once played in an eight-team volleyball league. But the new middle school concept took away four Rowan County schools. North Davidson left the league for the same reason. Southeastern Stokes dropped out of the 1992 season at the last minute due to lack of interest.

When the smoke cleared, there were only three teams for the ‘92 season: North, South and Chestnut Grove.

“We had enough girls out here (trying out) for three or four teams,” North coach Roverda Jarvis said. “I cut some who could play.”

After sharing two championships in the past, the Wildcats gave Jarvis her first outright title. They were a 10-0 juggernaut that would have won just about any league. Meanwhile, the Tigers (2-6) suffered their first ever losing season. The big names for Jarvis were Williard, Newsome, Katie Desch and Carmen Cornatzer.

“I wish we could have played more teams,” Jarvis said. “We dominated every match. We had more three-hit balls than we’ve had in the past three or four years.”

Nearly three decades after walking off with three conference crowns as an eighth grader, Jonette Williard Poole is a wife and mother living in Missouri. She and husband Matthew have two sons and one daughter (ages 18, 16 and 13). Her parents, Johnny and Luane, still live on Ben Anderson Road in Mocksville.

When she was asked which sport was her favorite, she paused.

“I liked them all,” she said. “It would be hard to choose (my favorite). Softball at the time was probably my favorite, but I’ve grown to like volleyball a lot now because of my girl (Hayden, a sophomore). I don’t know, I loved playing them all.”