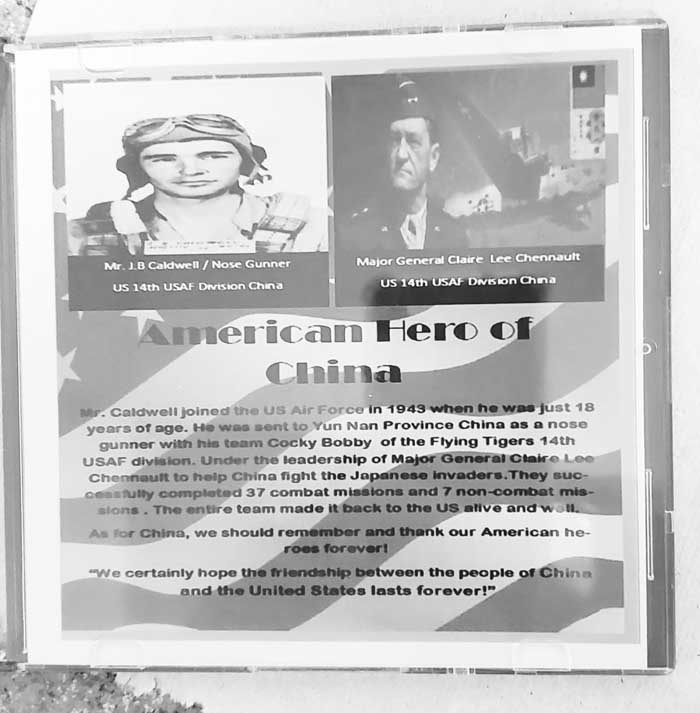 The cover of a video Hong Mizelle made about World War II hero J.B.Caldwell.

Happy 95th birthday to Mr. J.B.Caldwell on Aug. 25. Wishing you the best and healthiest ever.

Two years ago, I could have a crowded party for the Flying Tiger’s hero, Mr. Caldwell, on his 93rd birthday. Again, I thank you all who came and gave him surprise. He was thrilled and asked me to have this kind of celebration every six months.

Last year, he didn’t feel doing anything much on his 94th birthday. He just wanted to have lunch with me at Jin Jin Restaurant. But later on, when I asked him what he wanted of his big 95th birthday, he said: “Oh, I have a year to think about it.” His sense of humor came out.

My gift for Mr. Caldwell’s big birthday is a short documentary film I made about the most respected “American Hero of China.” The plan I had in mind was to show the film at Brock Performing Arts Center to the public on his birthday. Unfortunately, the unexpected COVID-19 pandemic stopped such activity.

I am not a professional filmmaker, but I just simply feel it’s my duty to keep our hero’s image alive. The film will be around forever, which means we can thank and remember Mr. Caldwell forever.