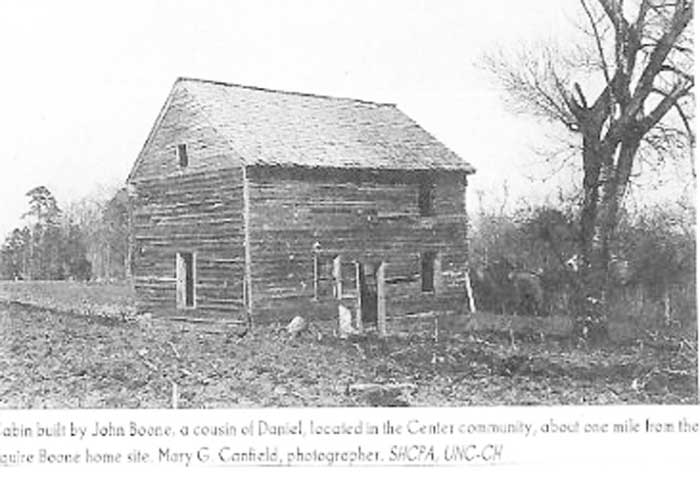 John Boone's cabin as it stood later in the Center community.

John Boone was the first cousin of the more famous Boone, Daniel. He was born in Pennsylvania in 1727 and spent his childhood with his uncle and aunt, Squire and Sarah, after the early death of his mother. He was named after his father’s brother, John, who was a teacher and who kept the records and was the early historian of the family.He came to North Carolina with his uncle and family in the middle of the 1700s.

John married a girl named Rebecca after he moved here. They received a land grant from the Earl of Granville for 630 acres on Hunting Creek near the present-day Godbey Road just south of Center Methodist Church and only a mile or from his uncle’s home site in Davie County, then Rowan.  He and Rebecca had 9 children who all just happen to be named in Rebecca’s will.

A successful farmer, he continued to acquire property until he had over 1,000 acres; thus it was considered a plantation. Legend has it that John was well-known for his size and strength, and one story said that he killed a panther with a tree limb when it was attacking his livestock.

The Moravian minister, George Soelle, an early circuit-riding preacher, wrote about many visits to John in the “Moravian Records.”  It would seem that he hoped that the Boone’s would join the Moravian fellowship. However, he wrote that Boone “will probably join the Baptists for the sake of communion.” We do know that one of his sons became a Baptist preacher, so Soelle’s theory was undoubtedly correct.

When he died in 1803, he might have been buried on his land or either at Joppa Cemetery, the Presbyterian burying ground, which is where Squire and Sarah Boone are buried and is a popular tourist attraction here in Davie.

My interest in Boone came from finding some information while I was working on another family tree that puts him not as my direct ancestor, but his cousin Hannah is since she married into the Penry family. You never know what you are going to find out, but the search is fascinating!

Further, my grandmother Smith, born in 1891, was in possession of 2 deeds signed by John Boone’s son, John Jr., for property that was sold to her family after John’s death.  Both were original, dated in 1813 and were given to the library for safe-keeping.  Mama Smith also told me that she recalled going to the John Boone cabin one time when she was a child for a taffy-pulling! The cabin is no longer there, but what memories it must have held!

I’ve made the most of COVID.

However, those who’ve lost their lives have not departed without my quiet grievance. As the isolation has continued, I have felt strangled by the dark, dismal news reports and starved for more light and beauty.

I decided to draw summer to a close with a one day a week, 6-week, drawing class taught by master artist, Susan Lyons. Wishing to work in color and perfect my art skills, I didn’t foresee the greater lesson I was about to receive.

On the first day of class, we focused on how light is cast on an object and forms a shadow.

“To make something light, you have to put something dark next to it,” said Susan.

I thought about this in terms of our lives. Do we need something dark like a virus and death to appreciate good health and being alive fully?

Susan told us, “As artists, we show people where to look. We lead people.”

I began to think about the profound nature of those words. Taking her words out of context and applying them to life in general, I believe everyone is an artist.

If we imagine our words and actions as a big paintbrush making grand strokes of color on a canvas, and reflecting the light, we are teaching people, showing people, and leading people through the actions of our lives.

Be the beacon for those in the dark.

The Value of Their Words

Over my working years, people have given me numerous things. I have received training, advice, and information from so many that I can no longer remember their names or faces. The training and guidance I’ve received must number in the hundreds of hours. Additionally, it has benefited me professionally and personally. A few examples include: documentation, machine operation, problem-solving, customer relations, communications, process improvement, complaint resolution, etc. I’m grateful for the skills it has given me, but to a greater degree, it is the pieces of advice that remain foremost in my mind.

Receiving advice is common in the workplace, but receiving advice you need at a particular time is rare. That’s why two particular pieces of advice remain fresh in my mind after all of these years. Of course, like many young individuals, I was apprehensive when it came to guidance. However, I also knew that my inexperience undermined me, so I weighed their words and found them to be gold.

Early in my working years, I heard the advice, “Don’t try to set the woods on fire.” This advice, though countrified, was a warning to me. It persuaded me to restrain the tendency to show-off or compete with those of far greater experience. While diligent, youthful exuberance can lead an individual to make a terrible mistake or experience a serious injury on the job. This advice always returned to my mind when faced with a new job setting, and I felt it spared me much sorrow and regret.

Some years later, as a manager, I was faced with the dilemma of handling a situation where several employees broke company employment policy. In discussion with the shift manager, he pointed out that the issue would have to rest for the time being due to the lack of evidence and hearsay. Sensing my annoyed impatience over the matter, he added, “If you know about it, they didn’t get away with it.” I disliked his answer at the time, but he was right. My inexperience motivated me to act, but his wisdom greatly aided me in understanding patience and human nature.

I can’t list all the valuable pieces of advice that I’ve received over the decades. However, I am grateful for those people. They had the courage to tell me what I needed to hear. Whether they know it or not, their advice has benefitted me time and time again. I can only hope that some small piece of advice I’ve given at some point has been as valuable to others. 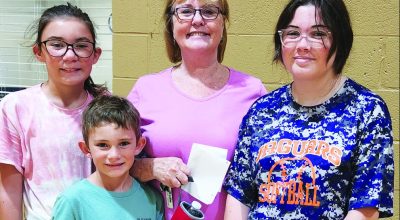