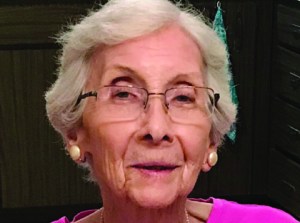 She was born on April 4, 1925 in Cooleemee to Samuel and Lillie Jarvis Bailey. She left her hometown to become a nurse, and while serving as an Air Force nurse she met a patient, William Ansel Cox, who became her husband in 1952. He was a career Air Force officer, so they moved often. She worked as a registered nurse on and off as she and her husband raised their two sons. In 1974, they settled in Gainesville. A reader, she volunteered at Friends of the Library for 25 years. She loved to travel and she was a long-time member of Trinity United Methodist Church. Known to many as “Ms. Ruby,” she was a beautiful soul, kind, caring, thoughtful, and independent.

She was preceded in death by her husband, her parents, and 3 brothers Clarence, Eugene and Kenneth “Bud.”

Services will be held at a later date.