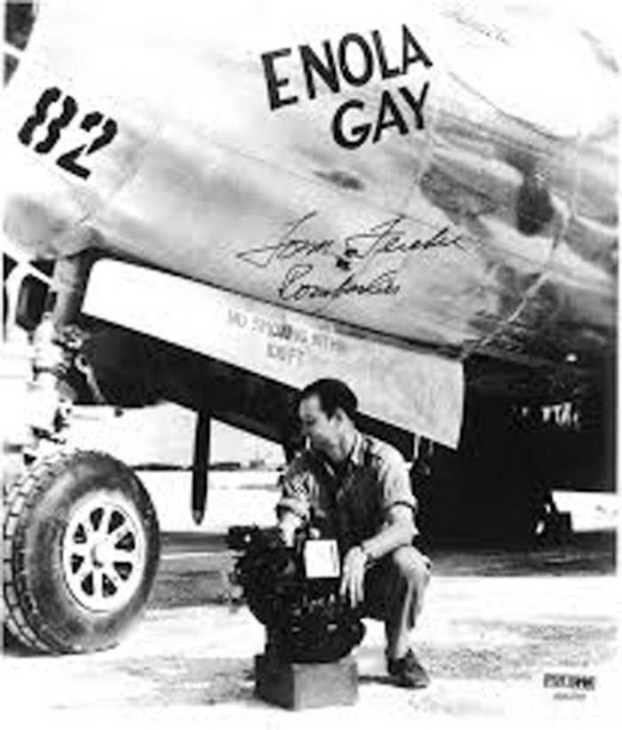 Tom Ferebee with the Enola Gay in this autographed photograph.

Sometimes, this job does have its perks.

And I’ve shaken the hands of Tom Ferebee and Paul Tibbets.

The latter definitely ranks as a privilege and honor, a true highlight of my life. Patriots, both. Heroes, both. All around good guys, both.

Today (Thursday) is the 75th anniversary of the dropping of the atomic bomb on Hiroshima, Japan. Tibbets was the pilot. Ferebee, a Davie County native, was the bombardier. He is buried in a simply marked grave at the Wesley Chapel United Methodist Church cemetery in northern Davie County. The flyover at that funeral is something I’ll never forget.

There’s arguments about whether the United States should have ever dropped that bomb. It pretty much brought World War II to an end. War is ugly, and people die. It happened at Pearl Harbor, and later on Hiroshima and Nagasaki.

But there’s no argument that Tom Ferebee was a national hero, a world hero, one who should be remembered with pride, one who’s life should be taught in local schools, one who cheated death more times than he could count yet still went on to live a happy, fulfilled life.

Like most people in Davie County at the time, Tom Ferebee grew up on a farm. He excelled in sports in high school and at Lees-McRae College. An injury hindered an attempt at a Major League Baseball career, so he joined the Army Air Corps in 1941, just months before the United States entered into the conflict.

He was quickly trained as a bombardier, and dropped bombs in Africa and Europe from a B-17. During this time, he met Tibbets, the pilot, and Theodore “Dutch” van Kirk, the navigator. Ferebee was the bombardier on the lead plane on the first air strike against Nazi-occupied Europe.

In 1944, things changed. Ferebee was sent back to the United States, but not to his home. It was to the top-secret 509th Composite Group. Tibbets had personally recommended him, saying he was “the best bombardier who ever looked through the eyepiece of  Norden bombsight.”

The training was for the dropping of atomic bombs, but only Tibbets knew the real reason.

In May of 1945, the crew was relocated to Tinian, a US-occupied island and airfield some 1,500 miles from mainland Japan. At 2:45 a.m. on Aug. 6, the crew headed to Japan in a B-29 named Enola Gay after Tibbets’ mother. At 8:15 a.m., Ferebee opened the bomb doors. Forty-three seconds later, the bomb exploded above the city.

Though it killed more than 100,000, historians say it saved many more lives by bringing the war to an end. President Harry Truman took full credit for its use. Ferebee, Tibbets and other crew members never regretted their mission. They were members of the United States Military called on to perform a duty, and they did it to the best of their abilities. And it worked.

Ferebee continued in the military, retiring in 1970.

When the veteran’s memorial monument was dedicated in Mocksville in the 1980s, Ferebee was the guest speaker.

The late Buster Cleary, town board member and county commissioner, was a Tom Ferebee fan, to say the least. A signed photograph of the Enola Gay with crew members was his, and now can be seen in Mocksville Town Hall. Cleary was instrumental into getting the bridge over Hunting Creek on US 64 West named the Thomas Ferebee Bridge. That’s a day I’ll never forget, as well. We went out to meet Cleary and Ferebee at the bridge for a photo. Both were welcoming and obliging. Cleary opened his car trunk and pulled out a jar of moonshine and handed it to Ferebee as a gift. Of course, he took a big gulp before saying his thanks.

Tom Ferebee was a hero.

By Rose Vaughn Cooperative Extension intern, Davie County Center With all the changes taking place in America such as in... read more